The Feast of Feasts and the Triumph of Triumphs

And further down the line, the return of doubting Thomas.

No sooner had the reading finished than, suddenly, the bells started pealing mightily and at the same moment joyful shots were fired out in the courtyard. The monastery guards, in their kilts, were firing to the glory of God. Everything then quietened down for a minute or two: no bells, no shots, no shouts, no chanting… Everything became still all at once… Then within this sudden cessation of all the noise, there came, from within the church itself, from somewhere in its depths, a strange sound I’d never heard before, a very pleasant tinkling… metallic, but at the same time resembling large drops of water falling like notes of music… It was the Greeks rhythmically shaking little bells with an elongated handle [Leontiev is referring to the hand-held censer, the katzi which is used at various times in services, such as, for example, ‘Lord I have cried’, at Vespers. https://www.youtube.com/watch?v=jqX-h3V-zfo&index=12&list=RDKcCh0R1Ua_4 at 10:25 onwards. WJL] 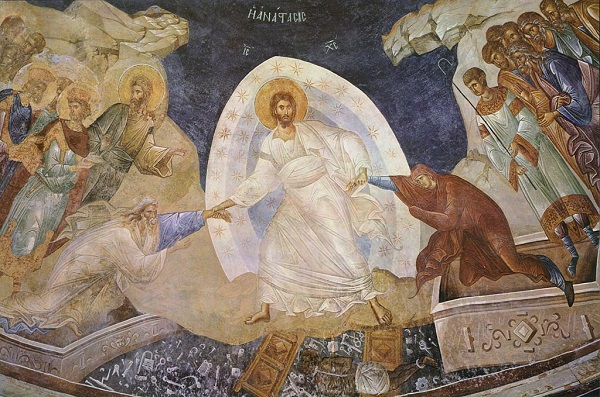 Again a call in Slavonic…

‘And make us worthy… Reading from the Holy Gospel of Saint John’.

‘On the evening of that day, the first day of the week, the doors being locked where the disciples were for fear of the Jews, Jesus came and stood among them and said to them, “Peace be with you’”.

Father Makarij ends with Thomas saying: ‘Unless I put my finger into his side, I will not believe’.

The choir sings ‘Glory to You, our God, glory to You…’

Again, the bells peal triumphantly and again shots ring out. Then silence again, the tinkling of the little metallic droplets…

‘What sounds are those?’

It’s the Gospel in Turkish.

The Christians from the East were delighted to hear it. They were used to Turkish, and to tell the truth, they still love it. In Asia Minor there are still, to this day, many Greeks who don’t know Greek. In their churches, all the services are celebrated in Turkish. [Leontiev, a well-known figure in Russian intellectual circles in the mid-19th century, was on the Mountain in 1871. WJL].

After another peal of bells, more tinkling of the katzi and more voices, then, from the other side of the church, there came something very familiar, but which, because of my surprise, seemed to me even more incongruous than hearing the Gospel in the language of the Pashas. I sensed the air of Rome:

After more singing, shouting, pealing and shooting, there came a language which I didn’t know…

‘What language is that?’

It was Albanian, the language of the renowned Arnaouts, whom Lord Byron loved so much, and whom, I confess, I also love. It’s the language of illiterate heroes, cruel robbers and of servants loyal to the death. In Christianity, these people provided the best military units when the Greeks revolted; in Islam, under the Turkish flag, they carried out the worst atrocities. A strange people: full of poetry, unmercenary chivalry, self-interest and wickedness, almost ridiculous naivety and the most treacherous cunning. An orphaned people who, in the past and to this day, have never really found their ethnographic identity [1].

Vespers ended. The pealing of the bells and the gunshots stopped. In the paved courtyard and in the long, narrow lines of the cells, the profound silence of resting once more prevailed.

I sat next to an open window and for a long time gazed out on the pink, golden, yellow, brown and whites bushes on the mountain, which seemed to be rejoicing with us, although it was usually so brooding and uninteresting. I heard the little bells sounding on the necks of the mules as they grazed, but other figures and sounds fully and wonderfully occupied my soul that evening.

Those voices and the pealing of the bells, that reading of the Word of God… These varied and different sounds: ‘Мир вам! Ειρήνη υμίν! Pax vobiscum! Selam size!…’. The steep hill, the austere forms in the icons, the burnished silver and gold everywhere- the gunshots, the silence, the peals again,, the silence, the voices raised in prayer, the shots again and the bells and singing… And the silence and the melodious reading in an atmosphere of careful attention, broken only occasionally by a smile of understanding or gentle wonderment…

And, above all that, the quiet, joyful, ceaseless dance of the numberless lights in the dark heights.

‘But it really is ‘the feast of feast and the triumph of triumphs!’

[1] The Greeks assured me that this excerpt from the Gospel is written in Greek letters on a separate sheet, which is then put inside a Church book and read in church (Author’s note).