The Interior of the Russian Monastery on Mount Athos

It may well be that I don’t have good taste and that I don’t understand much about art, but this was my impression and I share it most sincerely with my readers.

This beautiful iconostas is a gift from the late Abbot, Antonij Bochkov (a former merchant), who spent his last years as a monk near Moscow, at the Monastery of Nikolo-Ugreshkij [1].

Apart from the iconostas, there’s not much in the empty, spacious chapel of the Pokrov (Protecting Veil) which makes an impression in terms of the feast or ceremony (I don’t, of course, mean the service itself: the scrupulous order of the monks on the Holy Mountain is exemplary and I haven’t seen anything like it either in the churches of Moscow or in the hermitage of Optina, and not, of course among the Greek and Bulgarians, who always celebrate in a sort of more ‘daring’ way and less carefully than we Russians do). 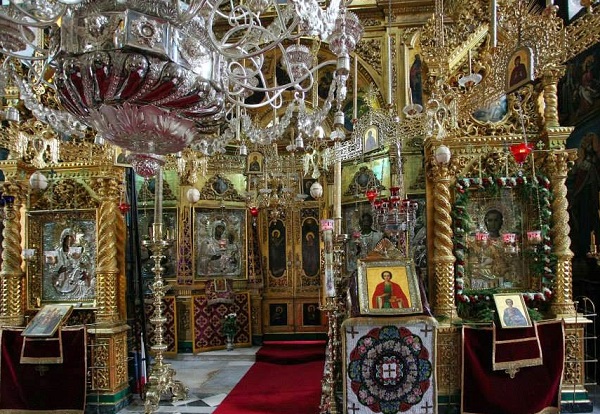 The atmosphere is completely different from that of the katholiko (main church). At this time the main church had been given over to the Greeks, who lived in the lower part of the monastery, near the sea, since they were the oldest members of the monastery[2]. This church is built in the usual Athonite style, which is like our own ancient churches in Moscow. It’s tall, magnificent, well-decorated with a severe aspect, dark, but shining with gold. The iconostas goes on for ever. Above the centre of the church is the round cupola, which isn’t spacious and tilted, as in the Church of Holy Wisdom [Ayia Sophia] in Constantinople, but rests on a tall tower as in Saint Isaakios’[3].

In Athonite churches, this central tower, the gigantic cylinder which departs to the heavens, above the head of the pilgrim, isn’t empty, as is usually the case with us… it’s full of light. Apart from the valuable, heavy chandelier, there’s the ‘choir’ around it which also has candles. It’s an enormous, silver circle and at feasts the candles create a broad crown around the lights of the candelabra, which rise above it in the form of a pyramid. Between the lights of the candelabra and those of the circle above your head, there’s also individual lamps and candles, as well as ostrich eggs on silver chains. The ‘choir’, too, is decorated with these large, white, pendant eggs.

Apart from this, our Eastern co-religionists have the custom at great feasts of using a long tool to bring the candelabra, the ‘choir’ and everything else hanging under the cupola into cyclical motion. All the lights from lamps and candles, all the silver and gold, all the big eggs, hard as stone, all of these are blindingly white, shimmering, sparkling, moving above you, as if they’re celebrating soundlessly together with the people, in a gentle, but ceaseless and formal dance…

Of course, we’re not used to eastern chant and this lack of familiarity makes it sound unpleasant and harsh. But when the choir of singers is good, as is the case with the Greeks at the Russian monastery, then we can’t say that this chanting has no power, nor that it brings a strange, most unusual surprise… Of course, the service at this Vespers would have been perfect had they, to the rather brooding and magnificent beauty of the ponderous church, to the vibrant luxury of the vestments with their bright colours, to the reading of the Word of God in various languages, to that simple and mysterious dance of the lights within the deep darkness of the cupola, been able to add the accompaniment of choice Russian music to this beautiful, harmonious Greek language…

There’s no perfection here on earth, however… not even in the highest manifestations of beauty. In any case, the ‘tone’ in which the Greeks and Bulgarians sing ‘Christ has risen’- which doesn’t resemble ours- is quite pleasant. The melody’s less quick and sprightly than ours: it’s slower and even somehow more melancholic. But if you live for any length of time in the East, you soon get used to it, as if it’s your own, even from your homeland…

But now the deacon’s voice rings out:

‘And let us pray that we may hear the Holy Gospel of the Lord our God’.

‘Reading from the Holy Gospel according to Saint John’.

‘Let us attend’, replies the Russian archimandrite Makarij in Greek.

This first Gospel is read in Greek by the centenarian Abbot Gerasimos himself, seated next to the Royal Doors because of weakness. He was a forty-year old priest back in the time of Catherine the Great.

‘When it was evening on that day, the first day of the week…’ and so on, ‘Jesus came and stood among them and said, “Peace be with you”’.

[1] One of the many tantalizing statements by Leontiev. We owe him the courtesy of agreeing that this is his best understanding of the situation. Someone must have told him so and he’s recorded it. But in what sense were the Greeks ‘the oldest members’ and how did this affect where they lived? Were they, in some way, not ‘the oldest’ but ‘the most senior’? Even this doesn’t help much, because, as testimony to the fact that Orthodoxy is not ethnocentric, the eminent Greek historian, Apostolos Vakalopoulos records that: ‘At the end of the 15th century, the Russian pilgrim Isaiah … says that nearly half the monasteries are Slav or Albanian. As Serbian, he quotes Doheiariou, Grigoriou, Ayiou Pavlou, a monastery near Ayiou Pavlou dedicated to St. John the Theologian (obviously Dionysiou), and Hilandar. Panteleïmon is Russian, Simonopetra is Bulgarian, and Karakallou and Filotheou are Albanian’. WJL
[2] The Nikolo-Ugreshkij Monastery is in the region of Moscow and was founded in 1380 by the Grand Prince Dimitri Donskoj on the site where the wonder-working icon of Saint Nicholas had appeared to him.
[3] Saint Isaakios is the cathedral church of Saint Petersburg