The Light of the World

On the occasion of the memory of the holy six hundred and thirty God-bearing Fathers who constituted the 4th Ecumenical Synod in Chalcedon, the Church reminds us of its answer to an always topical problem, expressed differently, of course, at different times, which is that of the means and measure of God’s co-operation with us. It does this by recalling the vicissitudes of the 5th century, when the Christian world was rocked by two heresies which were completely mutually contradictory. These appeared to be at odds with each other, but in fact both attacked Orthodoxy. 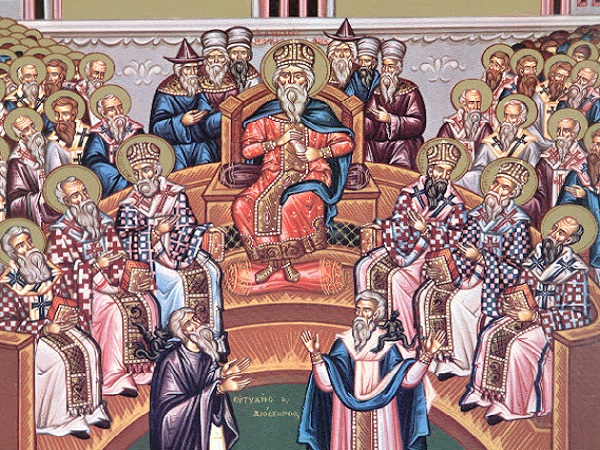 What we’re talking about here is the fierce rivalry between Nestorianism and Monophytism. On the one hand, there was Nestorius who reacted so strongly against the heretical doctrines of Arius, who believed that Christ was created, that he ended up talking about two Christs: one was a man born of Our Most Holy Lady; the other was the Only-Begotten Son and Word of God. According to Nestorius, Christ the man was so devoted to God that He attracted the Son and Word of God, Who appropriated him and resided in him. This didn’t happen at Christ’s conception, however, but then He was a grown man, which is why, according to Nestorius, Our Lady is the Mother of Christ, not the Mother of God, because she gave birth merely to a human person. The Monophysites, on the other hand, who attacked the delusion of Nestorius with fanaticism, went to the other extreme. Starting from the correct position that the Only-Begotten Son and Word of God became human and was therefore made flesh in the womb of the Most Holy Mother of God, they then went on to teach that, as the divine nature was more powerful, it absorbed the human element, so that, in the end, Christ had only a divine nature. From the extreme of the dominance of the human person, to the extreme of the dominance of God. Both equally wrong. Both equally destructive.

The God-inspired answer
What is it we believe concerning Christ? What is Christ in the Orthodox faith, particularly as regards the problem which was the bone of contention between Nestorians and Monophysites? The Fathers of the holy 4th Ecumenical Synod said, quite simply, that Christ is one, a unified person, God and human, and that there are not two Christs, one human and one divine. But Christ has two natures: perfect human and perfect God at the same time, immutable, indivisible and inseparable. One and the same (not two as Nestorius claimed), in two natures (not one, as the Monophysites taught).

In the Gospel reading for the Sunday of the Holy Fathers, Christ calls His disciples the light of the world, precisely to demonstrate that Christians have the opportunity, through the way they live, to enlighten their benighted neighbours, who are slaves to sin and delusion. At the same time, however, He’s insinuating something more, which He clarifies with the example of the lamp which is burning, not to be hidden under the bushel, but to spread light through the whole house. How is there light? Of course, there’s combustible material but that’s not enough. A spark has to be struck to light the flame and thus, together with the combustible material, to produce light.

In other words, it takes co-operation between God and people before we can talk about spiritual production, enlightened people, Saints of God. And we understand this from the ascetic practices of Orthodoxy, from the way of life these require, in which the most important feature is co-operation between God and people, in order to produce illumination, glorification, sanctity. This is why Christ goes on, in the Gospel, to talk about the Law and the Prophets, and says that He has not come to abolish them but to fulfil them.

Similar concerns today
We see the same contention in our own day concerning the terms of the co-existence between God and us people. On the on hand, you have the contemporary Nestorians, people in the West, who clearly give priority to the human person and not only consider God to be an object of cold reason, but have reached the point of killing Him off, by denying His existence entirely. On the other hand, you have the modern Monophysites, the people in the East, who, by ceding the exercise of authority to God, have abolished the human element. The former believe that, merely with their human powers- and, to be fair, they have produced amazing scientific accomplishments, as well as horrific catastrophes- they can acquire truth and make people perfect in an anthropocentric system. The latter, chained to an authoritarian God, have made progress in wisdom and culture, since both Islam and the Eastern religions, in the security of their dependence on the divine as they conceive it, can produce ideas. But they also, at the same time, produce and justify inhuman and violent conditions within the context of a theocentric system.

The solution which Orthodoxy has juxtaposed for centuries now is the collaboration between God and people, for the salvation of the latter and the glory of the former. And this theanthropic-centred system is expressed through our own efforts at prayer, vigilance, and restraint, and also through the Grace of God, which blesses, fortifies and in the end illumines, so that we neither abolish God nor does God abolish us. In a few days, when the Church celebrates the memory of the Prophet Elijah, it will remind us of his struggle with the false prophets of Baal. We’ll see Elijah gathering wood for the altar, ignoring the fact that it was raining, and God sending down fire to burn the wood, even though it was soaking wet. Despite his sinfulness, Elijah expected God to send down the fire, while, on His part, God expected Elijah to gather the wood, overlooking the weaknesses of His servant. It’s this co-operation which shapes the spiritual life for each one of us.