‘Word and Sacrament, Sermon and Mass all Interact’

b) Sermon, mass and hymns
There is a wide-spread impression that Luther gave prominence to the sermon to the detriment of the mass, but in fact he restored the latter, which had been completely marginalized. His aim was to establish a balance between the pulpit and the altar. Scripture was heard only from the readings and the hymns, which were in Latin. He restored it to its rightful position in the services. Apart from this, the sermon had become entirely distorted and its place had been taken by myths, legends and pagan lore. By the same token, the mass gave the message that the faithful would gain the favour of God and their salvation by retiring to monasteries and making donations for the erection of churches. Faith had all but disappeared, while Luther himself was utterly convinced that it was oral teaching that made it known and strengthened it: ‘faith comes from what is heard’ (Rom. 10, 17). Word and sacrament, sermon and mass are not in competition with each other but are coordinated: ‘those whose conscience is burdened by their sins should have recourse to the sacrament for relief, [which comes] not from the bread and wine, not from the body and blood of Christ, but from the word which is provided in the sacraments, which makes them present and offers the body and blood of Christ which was offered and shed for me’. 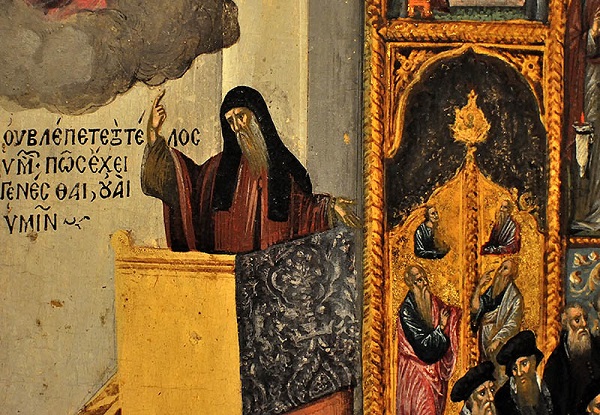 Luther insisted on the oral nature of the sermon and stressed that Christians do not live with their eyes but with their ears, because this is how they hear the word of God and therefore believe. But apart from his oral sermons, he also wrote hymns based on the Scriptures. The antiphonic hymns which were composed in the early centuries in the Greek-speaking East, in order to combat the spread of Arianism, became well-known in the Latin-speaking West through the work of Ambrose of Milan (339-397), who adopted them for the same reasons. Later the Benedictine monk Hrabanus Maurus (780-856), who was known as the Teacher of the Germans, composed hymns including ‘Veni creator Spiritus’ (‘Come creator Spirit’), often sung at Pentecost. Luther translated it in 1524. The Reformation in general re-assessed the role of music in the transmission of the Gospel message, on the basis of Luther’s exhortation singen und sagen (sing and say). Hymns were used to convey the joy of the experience of faith to the whole congregation, who joined in the singing. As time passed, the single vocal line was transformed into polyphony and Luther wove a combination of monody and polyphony, the oral and learned traditions, attributing to it second place after theology. Music is a divine gift, not something human. It brings delight to the soul, expels the devil and gives rise to an innocent joy. It assists in the struggle between heaven and earth, courage and melancholy, God and the devil. In this way, Luther renewed the internal relationship between vox musicae (the voice of music) and verbum theologiae, (the word of theology).

Music marked the whole of his life: the traditional folk music in his childhood, the ars musicae which was taught in the quadrivium in his teenage years and the music of the Church from the time he joined the Augustinian Order, in Erfurt (1505). By proclaiming that the kingdom of heaven is a kingdom of hearing not of sight, Luther resolutely opposed Scholasticism, which assigned no great importance to music,. In the period from 1523-1543, he himself composed 38 hymns, which fall into the following categories:
– pre-existing hymns translated into German
– versification of the psalms in German with new musical accompaniment
-musical setting for Biblical hymns
– the creation of an anthology of hymns with texts which owe their inspiration to Scripture, though are not taken directly from it.

His hymns became widely known and contributed to the spread of the Reformation, based on the homiletic principle of singen und sagen.

c) the reception of his message
Luther was a slow speaker and coughed frequently, but he was full of passion and always gave the impression that, in the pulpit, he was on the battle-field, his opponent being either Papal irregularities or Satan, sin and death, which were defeated by the Cross of the Lord.

His sermons and instructional discourse did not always have the desired effect on the citizens of Wittenberg, however, and this impeded the progress of the Reformation. He noticed that the preaching of the Gospel did not bear the fruit he had been hoping for and noted characteristically that ‘many people hear the sermons for two or three years but are still unable to give even a single answer as to what faith is’. He complains that people leave the church no wiser than they were when they entered, since, while they were there, all they did was sleep. Sometimes they would prick up their ears to listen to stories, but when he started preaching about justification through faith they fell asleep.

His enthusiasm for making the Biblical text familiar [since before the Reformation it would have been read in Latin] and explaining the meaning hidden within it did not meet with the desired response which depressed him and made him want to restrict himself to academic teaching. But he always returned to the pulpit and preached, until the end of his life, somewhat reconciled to the fact that no preacher could completely remove, or even change to some extent, all the things that were amiss in the Church of Rome. He returned in order to present Christ Himself as the exemplum and to call upon the faithful to follow Him: a sweet and merciful Christ Who is a far cry from the fearsome Judge of the Middle Ages.