Elder Paisios performed the operation for you this morning!

Nikolaos Koulouris, Professor of the Law Department of the European University of Cyprus describes the following event.

In 2012, Stelios Kreouzos, who’s a journalist with the Cyprus Broadcasting Corporation and a student of mine at the Law Department of the European University of Cyprus, was diagnosed as having fluid in his lungs and heart. He suffered for a year and a half, undergoing treatment in hospital for long periods. In the end, his doctor recommended that he undergo an operation to drain the fluid and put an end to his difficulties. The surgeon told the patient that there were considerable dangers involved in the operation. The day before the planned operation, the man went into hospital. He was understandably anxious about the outcome of the operation. He was visited in the afternoon by a cousin who brought him a book by Elder, now Saint, Paisios the Athonite, which she told him would help settle him. I should say that until then the man had had only a superficial, formal relationship with God and the Orthodox faith, like most Greeks, alas. He started to read the Elder’s book. At some stage he reached the point where, according to his biographer, the Elder asked God ‘to send him a form of cancer in order to test him’, and this made a big impression on the man. But it was the next saying which moved him profoundly: ‘God, every day of my life’s in your hands’. In tears, in a very emotional state, my student then began to repeat this saying of the Elder’s over and over, aloud: ‘God, every day of my life’s in your hands’. It was a form of indirect prayer, but full of substance, for the success of the operation. 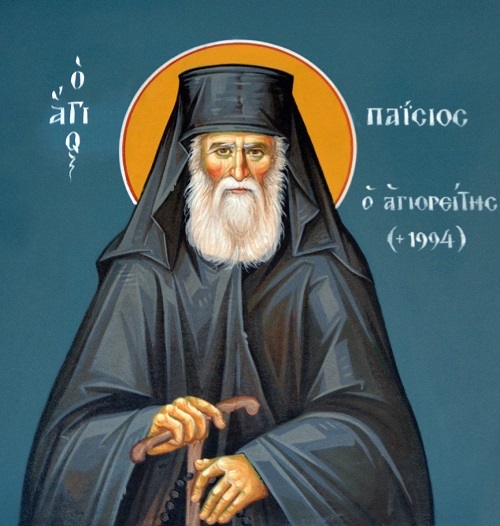 When his wife heard him, she went into the room in some distress and asked him why he was crying, in an effort to calm him down and assure him that the operation would go well. He asked her to leave him alone in the room, go home and look after their two young children. She should go to sleep and himself would calm down. So he was left alone in the room, where he continued to repeat the saying of the Elder and wept. Later on, when the night was well advanced, he perceived, as if in a vision, the presence of a man wearing the monastic habit. Instinctively, and without realizing the full import of what he was saying, he turned to the monk and said: ‘Elder Paisios, if you’ve come for me, please help me to have a successful operation’. And he continued to weep and to repeat the Elder’s saying ‘God, every day of my life’s in your hands’. This went on until 5:45 in the early morning of the day on which the operation was to be performed. He fell asleep, but before doing so he looked at his watch and he remembers that that was the time. At 7 in the morning, a nurse came to wake him and prepare him for the procedure. Much to the nurse’s surprise, the man’s clothes and bedding were soaked. The nurse asked if he’d spilled water all over himself and the man said he hadn’t. He was given fresh clothing to put on and taken into a nearby room for the final readings to be taken to find the precise location and amount of fluid in the lungs and heart, since the surgeon would need the information for the operation. When the technician had taken the readings, he told the nurse to take the patient to another machine because the one he’d used often didn’t function properly and this time hadn’t shown anything. So he was taken to another machine, which was particularly reliable and had never given any trouble. To his amazement, the technician saw that there was no sign of any fluid in any part of the patient’s body. He immediately got in touch with the surgeon to tell him about it. Now this particular surgeon is a man close to God, and was already aware of what had happened in the patient’s room the night before, because, in the meantime, the latter had mentioned it to him. The surgeon told the technician: ‘I’ve got a good idea of what’s happened, but just to be completely sure, take him for a scan, with a note on the diagnosis of the position and quantity of the fluid in his body’. And so that’s what they did. When the examination was complete the doctor who looked at the findings got in touch with my student’s surgeon and told him that there must have been some mistake in the referral note and that the patient must have been sent for examination for some other reason. He said so because the results showed that ‘there’s no trace of fluid in the patient’s body’. The surgeon then told the nurse to take the man back to his room. The surgeon accompanied him and told the patient to get out of his hospital robe, put on his ordinary clothes and go home. My student asked the obvious question: ‘But what about the operation, doctor?’ The latter replied: ‘Elder Paisios performed the operation for you this morning!’

I was told all this personally by my student, who from that day has praised God and has commemorated Saint Paisios, as he now is.