Bring faith back into Canadian politics

TORONTO—I recently attended a leadership workshop where a guest speaker spoke about the importance of listening, supporting her point by articulating that “God” gave us two ears, but only one mouth, so that we would listen more, and talk less. It was quite a surprise to hear that word, God, in such a setting, since He has been largely removed from the public square.

Her reference reminded me of an article from July written by veteran columnist Susan Delacourt, in which she employs former U.S. president Jimmy Carter’s famous 1979 “crisis in confidence” speech as a framework for predicting the rise of the current White House occupant.

Among the key points I took away from re-reading his speech—many of which Delacourt highlights—two especially stood out: its frankness and its focus on faith. 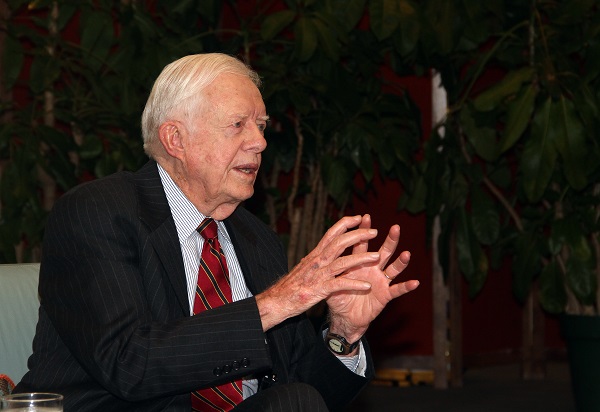 Carter’s address to the nation was free-flowing and forthright, without the spin and communication clichés which too often characterize the speeches of today’s politicians; but it was Carter’s focus on faith which was most prominent. A well-known and devout Baptist, Carter and former first lady Rosalynn Carter have never been shy to publicly confess their faith.

It is unfortunate that in general today’s elected officials do not do the same; our political discourse and, by extension, our society, are poorer for it—especially in Canada, where so many immigrants bring their rich religious traditions and practices (such as my Greek Orthodox parents).

There was a time, however, not too long ago, that politicians discussed “God” more openly, although usually not as frequent, or with as much fervour, as their American counterparts.

Let us remember that the Charter of Rights and Freedoms begins by recognizing “the supremacy of God;” we ask that “God keep our land glorious and free!” when we sing our national anthem; and, to this day, the governor general concludes each Speech from the Throne with a variation of, “may Divine Providence guide you in your deliberations and make you faithful custodians of the trust bestowed upon you.”

In contrast, we saw the leader of the official opposition, Andrew Scheer, sneakily attacked for his faith following his election as Conservative leader, as if being a practising Catholic threatens the secular ideology that dictates—and often self-righteously judges—political discourse. There is much more to religious people than the sanctity of life and same-sex marriage (which is a wholly settled issue in Canada), though these are usually the issues hardened secularists use against people of faith.

Canadians, and especially our politicians, are generally uncomfortable discussing religion in the public square, although Faith in Canada 150, chaired by Andrew Bennett—Canada’s first ambassador for religious freedom—is working to celebrate the role of faith in society.

There are hypocritical exceptions, of course, such as when politicians visit synagogues, churches, and mosques to celebrate religious feasts and cultural festivals. It is there where they address the faithful (pun intended) say a few words in the local language, and hopefully leave with some fundraising commitments and more supporters. Outside the mosque parking lot or church basement, however, the relationship between faith and politics is limited.

While some support a clear division between the two, it is inconsistent with Canadian political tradition and lessens the quality of our conversations.

We often pride ourselves in having an open and inclusive society, where everyone has “freedom of conscience and religion … of thought, belief, opinion and expression …” (there’s that Charter again) but where these freedoms are often attacked if they do not conform to the prevailing political wisdom. Distinguished Princeton Professor Robert George makes the case that liberal secularism is itself a fundamentalist religion.

We should not be afraid to openly discuss the role of faith in society, which will only enrich our discourse. This does not mean that Moses’ Genesis or Evangelists’ Gospels should dictate public policy; but it does mean that referencing “God” in the public square—and the positive values such as love, joy, humility, and service that people from all religious backgrounds bring with them—should not be discounted or overlooked.

Jimmy Carter’s speech, as Delacourt points out, was “prescient” in predicting the rise of Donald Trump. While his warnings about public confidence in government were not heeded, let us not ignore his references to faith, because it is faith that ultimately underpins and influences our thoughts and actions, whether we have it or not.

Evan Sotiropoulos, a Toronto-based writer, has been contributing to The Hill Times since 2006.