Today’s Gospel reading (Luke 8, 41-56) is truly wonderful. It has to do with the raising of Jairus’ daughter and the healing of the woman with an issue of blood.

According to the text, an important figure in the synagogue, Jairus, approached Jesus and asked Him to accompany him to his home to cure his only daughter, who was twelve years old and at death’s door. Christ set off for the house, but a woman who’d been suffering from hemorrhaging for twelve years and had found no cure from doctors approached Him and touched the hem of His garment. When she did so, the bleeding stopped. Christ realized that power had left Him and asked who it was who’d touched Him. The woman approached, explained that she’d been cured and He said to her: ‘Take courage, your faith has saved you. Go in peace’. In the meantime, Jairus’ daughter died. Jesus went to the house, however, and restored the girl to life. 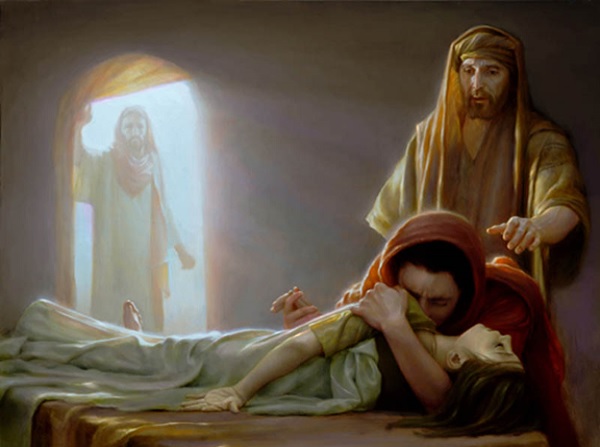 According to the Gospel reading, Jesus is on His way to save the daughter of Jairus. Another woman, however, also asks to be cured and this delays Him. This can be seen as a loss of time, because the young daughter had only minutes to live. But instead of hurrying off to the house of Jairus, the leading member of the synagogue, Jesus stops and begins another discussion, this time with a woman with an issue of blood. The father of the only daughter, who was suffering from his own anxiety and feeling that there was no time to be lost at this crucial moment, didn’t press Christ to go faster. He simply followed Him and shared the tragedy of another person, that is the pain of the hemorrhaging woman. The bad news was not long in coming: the leader of the synagogue was told that his daughter had died.

Imagine a father being told that his only daughter was no longer alive. And not just this. He was told not to trouble the Teacher any further, since there was no longer any need to do so. But Jesus didn’t turn back and leave, nor did He share in the father’s grief. Instead, He told him: ‘Don’t fear. Just believe and she’ll be well’. I don’t want to think about the distress of the father, but I wonder what he felt at hearing these words. If Spinoza, Descartes or even Hume had heard them, they’d have said: ‘What are you talking about? The girl’s dead and you’re going to bring her back? How’s that going to work? It’s impossible. Neither sentiment nor rational thought would admit such a miracle. Everything can be explained by the mind or through sentiment and you’re prepared to make a mockery of the man’s pain?’

The father was grieving. Christ was late getting to the house and on top of that was telling him that his dead daughter was going to be all right. That sounded weird, as, indeed, it is. His daughter was dead but would be well? How was this supposed to happen? Through faith, which neither [Hume’s] empiricism nor [Spinoza’s and Descartes’] rationalism are able to process and make the object of research. In his phenomenology, Husserl tells us: ‘That’s it and all about it. The situation is what it is and not something else. That’s the objective state of things, so what do you want to change?’ As for the Neo-Platonic Porphyry, we can imagine him mocking Christ’s words and writing in his work Against Christians about an absurd and delusional Christ.

Although Christ’s discourse is philosophical in its thinking and its view of beings in general, it proposes the transcendence of the completeness of created beings, of their nature and the laws of physics, since ‘where God so wills, the order of nature is overcome’. The words of Christ give life. Christ Himself is life. This life can’t be explained by empiricism, nor by rationalism, nor by existentialism. The ‘beyond’ in our history since the Fall- as alienation, the mortal consequences which affect the human persona, the dominion of death- lies in the possibility of life after death. This possibility, however, isn’t offered by nature or its laws or the terms and prerequisites of life, but by the person of Christ. Even though, according to Heidegger, no-one can deprive another person of their mortality, and even if Saint John the Damascan states in the funeral hymn that ‘every person decomposes’, according to Christ this dying ends with the resurrection.

Christ was delayed in His arrival at the house of Jairus, but He already knew that death did not hold permanent dominion over people and so He wasn’t concerned about the delay. He calmed the fear of the grieving father and asked him only to believe. On His arrival at the house, Christ said that the girl was not dead but sleeping, which caused some of those present to scoff at His words. This was the same reaction encountered later by Saint Paul at the Areopagus, when he told the Athenians about a new element in religious matters, the resurrection of the dead (Acts 17, 32). There’s a reason for Christ’s metaphysical optimism*, because He Himself rose from the dead and granted eternal life to the human race.

Christ also delays in our own time. Why does He insist on coming so slowly? I’ll borrow from the thoughts of Saint Nikolaj Velimirović and let him have the last word: ‘His progress is difficult. That’s why He walks slowly. He makes His way through pools of blood, through the darkness of sins, through the thorns of robbers. His path is narrow and many fallen sinners lie on the brink of the abyss on either side. He has to stoop to both sides, to raise them and bring them along behind Him so that they all move forward together. This is why He walks slowly’.

* ‘Metaphysical optimism’ here is a philosophical concept, such as ‘empiricism’, ‘rationalism’, and ‘existentialism’.