My mind has been returning lately to this article as I think about issues between Christianity and the State. It has become an increasingly common legal opinion in the Western world that religion is an inward belief, aprivate matter. At the same time it has used this understanding to restrict various expressions of belief. In some nations the hijab (scarf) is being forbidden in schools. Personal crosses have been banned from the work place. Roman Catholic institutions are being required to provide birth control for employees in the US. There is growing concern among some that the same development of thought might seek to punish religious groups who do not recognize same-sex unions. The essential problem is the failure to acknowledge that religion is a set of practices and not merely a set of beliefs. This distinction, in many ways, lies at the heart of the secular world-view. The separation of belief and practice is the same as having no God at all. In the US, we celebrate the independence of our nation this week. An independence that fails to safeguard religious practice is no independence at all. It is a new form of slavery to a lesser god: the State. 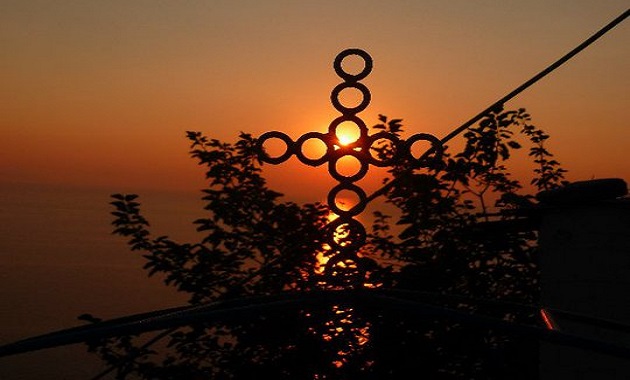 A God who remains generalized and reduced to ideology is no God at all. Only the daily encounter with the living God, with all the messiness it entails, can rise to the name Christian.

For the individual Christian this distinction is the great crisis of the believing life. There is a divide in our culture between the ideas we think and the lives we live – and the division is often accepted as normal. This is more than mere hypocrisy – our problem is not that we fail to live up to our ideas – our ideas frequently fail to have anything to do with the life we live.

In secularized culture, religion is not eliminated – it is placed at a remove. The remove in which religion is placed is anywhere that does not matter, anywhere that does not touch our daily lives. The secular genius of the modern world (including America) was its contention that religion and belief are the same thing. The acquiescence of believers to this arrangement was, in effect, an agreement to render their faith impotent.

The fatal flaw in this agreement can be summed up simply: true religion is not a set of beliefs – it is a set of practices.

Again, the manner of our failures goes beyond mere hypocrisy. The divorce between belief and practice is a cultural habit reaching far beyond religion. There is a radical division between thought and action throughout most of our culture. The frequently indistinguishable character of the contemporary Christian from the contemporary unbeliever bears witness to a deeper problem.

The practice of Christianity has been increasingly banned from the public square. We have agreed to privatize our faith. What we believe has become a matter of “conscience,” rather than the offensive matter of practice. The Reformation largely erased the outward forms of the Christian life: feast days; pilgrimages; vestments, etc. The Reformers were correct that the inward life of the Spirit was far more important than the ephemeral forms in which it was exhibited. However, they failed to notice that with the disappearance of the outward forms, the disappearance of the inward life would pass without notice. Today, the outward debauchery of Mardi Gras is the legacy of an abandoned Ash Wednesday. Christian practice is reduced to drunkenness (no American city seeks to ban Mardi Gras for its religious content – the practice of drunkenness is not as offensive as a Christmas Creche).