The holy and renowned Apostle Philip came from Bethsaida in Galilee, that is the same town of which Saints Andrew and Peter were residents. He was distinguished for his depth of understanding and spent a great deal of time studying the books of the prophets in the Old Testament. He remained chaste throughout his life.

The Lord found Philip in Galilee, after His baptism and urged him to follow Him. Philip lost no time; he immediately followed the Lord and became His disciple. Not only that, but when he met his friend Nathaniel shortly afterwards,  he said to him: “We have found the one Moses wrote about in the Law, and about whom the prophets also wrote – Jesus of Nazareth, the son of Joseph”. Of course we can find many other passages in inspired Scripture, that is the New Testament, which refer to the glorious Apostle Philip. 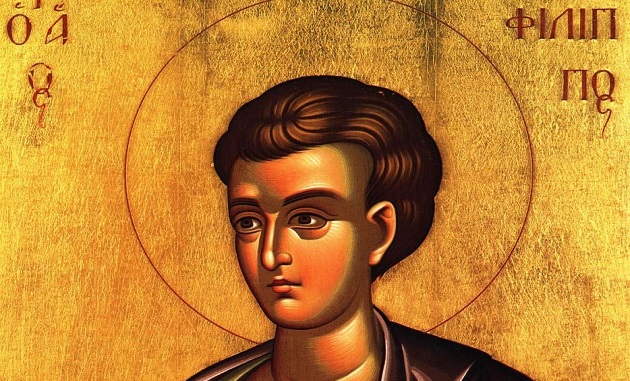 When the divine apostles drew lots to see which of them would go where to preach the Gospel of salvation, the countries of Asia fell to Philip. In his preaching, Philip had the Apostle Bartholomew as has companion and colleague. He also had his sister Mariamni, who looked after them. So Philip and Bartholomew, along with his sister Mariamni preached the Gospel in the cities of Mysia and Lydia in Asia Minor. During his teaching efforts, he underwent many trials and tribulations at the hands of the idolaters. They scourged them, beat them with rods, imprisoned and stoned them.

In Asia Minor, while they were preaching, they also found the Lord’s beloved disciple, John (the Theologian), who was also preaching the Gospel of salvation. At that time the wife of Nikanor the proconsul came to believe in Christ and for this reason, the proconsul and the mob burned down  the house of the Apostle Stakhys. They dragged Philip into the square in Ierapolis, in Phrygia, pierced his ankles and left him hanging upside down on a piece of wood. Thus hanged, the glorious Apostle made his final prayer and commended his spirit into the hands of God.

At once, the earth shook and, after emitting a loud roar, split and swallowed up a great many pagans. The rest, terrified at what had happened, fell at the feet of Bartholomew and Mariamni, who were also hanging, and, after cutting them down converted to the true faith: belief in Christ.

After this, Bartholomew and Mariamni buried the holy relics of the Apostle Philip with all due devotion. Bartholomew then made Stakhys Bishop of Ierapolis and went his way to Lykaonia, together with Mariamni, to preach the Gospel.

On Wednesday, 27 July 2011, it was reported that archeologists had unearthed a tomb which it is claimed may the tomb of Saint Philip, during excavations at Ierapolis. The Italian Professor Francesco D’Andria believes that the design of the tomb and the writing on its walls prove it is that of the Apostle. A link to this is: Tomb of Apostle Philip Found – Biblical Archaeology Society, where Asia Minor is referred to, bizarrely, as Christian Turkey. (WJL)