There was once a family of five living in Athens. The father and mother had three children, two girls and a boy. The boy was 11 years old, the girls 10 and 9. 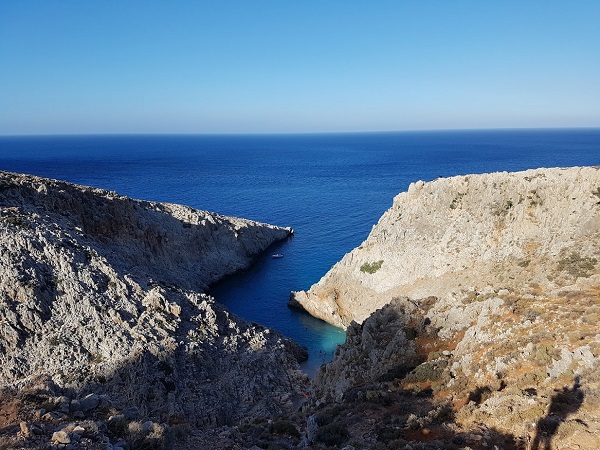 Saitan Harbour, at the Cape of Hania. Photograph: Dimitris Iliopoulos

It happened that the ten-year-old girl fell seriously ill. They fetched a doctor, who examined her and said that her condition was incurable. It would take a miracle to make her better. Her nine-year sister heard this and, in her innocence thought that ‘a miracle’ was some kind of medication. She loved her sister very much and slipped out, broke open the piggy-bank and took out all the money. She ran to the nearest pharmacy and said to the chemist: ‘Please give me the medicine called “miracle”, because my sister’s ill and she’ll die otherwise’. The pharmacist laughed at the naivety of the child and said: ‘I haven’t got that. Off you go’.

So she left and went to another pharmacy.

‘Do you have a medicine called “miracle’”?

This chemist also laughed at the child’s innocence.

‘No, we don’t have the medicine to make your sister better’.

So off she went to a third pharmacy and said to the chemist: ‘Do you have medicine called “miracle”? That’s what the doctor said who came to our house. He said my sister won’t survive unless she has a “miracle”. The chemist looked at her sadly, without saying anything. ‘Please, I love my sister and I don’t want her to die. She’s ten years old. Please give us the “miracle” medication. I broke open the piggy-bank, took the money, sneaked out of the house and came to find this medicine. Every pharmacy I’ve been to, they’ve laughed and said they don’t have it’.

As the little girl was speaking, it happened, by God’s grace, that the leading doctor for her sister’s complaint was standing right next to her.

He said to the little girl in a serious tone: ‘Sweetheart, I’m the miracle that God sent you to find. I’m a doctor. Take me to your home and I promise that, with God’s help, I’ll do everything possible to save your sister’.

She grasped his hand and they went to her house. As soon as the doctor saw the sick child, he picked up the telephone and sent for an ambulance to take her to his clinic.

It so happened that the doctor was a specialist on precisely this illness and he had all the equipment needed to deal with it.

Within ten days, the little girl was well again.

With the money from the piggy-bank, her sister bought a cake and took it to the doctor as a present.

You see, God looked into the heart of the child and sent the right doctor to make her sister well.