St Maximos the Greek was one of the most distinguished monks and theologians of the 16th century, famed for his missionary activities and reforming achievements in the Russia of his time. 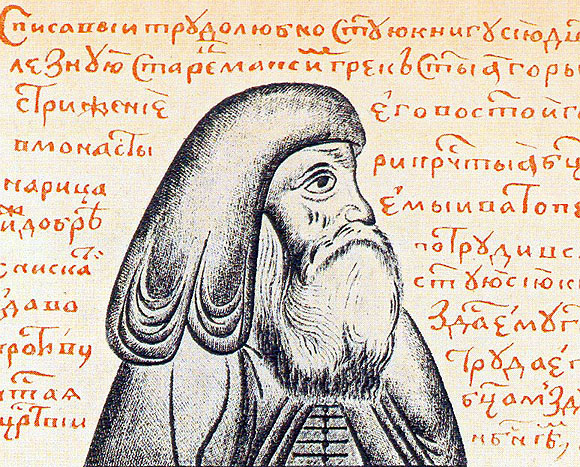 He was born in Arta in around 1470 of respected and prosperous parents, and his name in the world was Mikhail Trivolis. At an early age he went to study in Italy, at major centres of the Renaissance, where he was taught by distinguished Greek scholars.

On the completion of his studies in Italy, Mikhail Trivolis determined to embrace the monastic life on the Holy Mountain, choosing as his place of residence the renowned Monastery of Vatopaidi. Thus, towards the end of 1505 or in early 1506 he was tonsured as a monk, taking the name of Maximos, and devoted himself with zeal to study and the pursuit of the spiritual life. He remained in the Monastery for ten years as an ordinary monk, avoiding holding monastic offices, but taking part in various missions for the Monastery in Macedonia and the islands, where he preached the Word of God.

The fame of Maximos as a monk spread throughout the Orthodox world and particualrly among the Slav peoples, with whom the Vatopaidi Monastery had always had ties of friendship. For this reason, when the Russian Tzar Basil Ivanovich sent a special mission to Mount Athos to request of the Protos that an experienced and learned monk should spend some time in Russia with a view to undertaking the translation of the Church’s books from Greek into Russian, and following the refusal of the Vatopaidi monk Savvas, who was advanced in years and in bad health, the Protos chose Maximos Trivolis, a monk of learning and repute.

Maximos left the Holy Mountain in June or July of 1516, accompanied by the priest-monk Neophytos and the monk Lavrentios, who knew Russian. After a long and wearisome journey, on which he passed through Constantinople to obtain the blessing of the Ecumenical Patriarch Theoleptos, he arrived in early 1518 in Moscow, where he was received with great honours both by Tzar Basil and the Metropolitan of Moscow, Varlaam.

Maximos arrived in Russia at a time when great ignorance was prevalent among the people, with the result that superstitions, magic, astrology and self-indulgence were regarded as indissolubly bound up with the Orthodox Christian Faith. But apart from this, the sacred texts of Holy Scripture and the Fathers had been seriously corrupted by irresponsible copyists, which made the work of the Church even more difficult.

The first task undertaken by Maximos was the translation of the Interpretation of the Psalter, because of its usefulness for monks and laypeople alike. Since Maximos himself did not yet know Church Slavonic well, the Tzar supplied him with two translators to assist him. 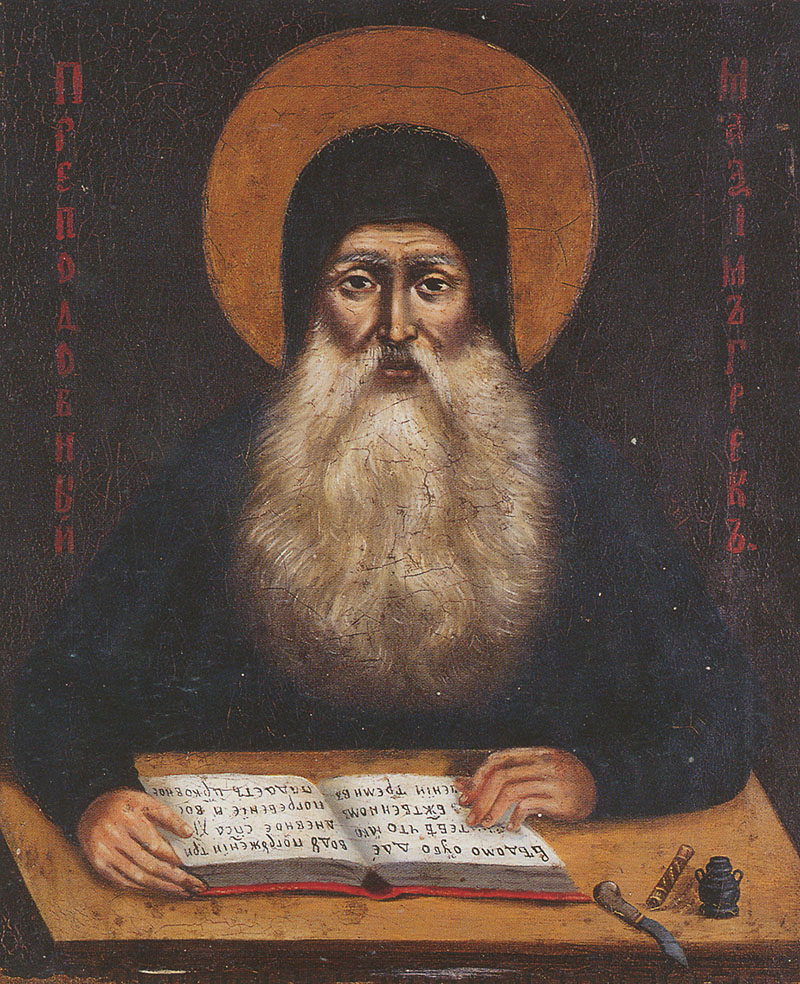 When the translation was completed, such was the enthusiasm of the Metropolitan and the Holy Synod that they all described the Interpretation of the Psalter as “a wellspring of piety”. This translation showed that the Russians had much to gain from this polymath monk. Thus, the Tzar, in spite of the strong desire and fervent requests of Maximos to return to the Holy Mountain, would not allow him to do so, but kept him with him, entrusting him with the translation of other patristic writings. In parallel with his work as a translator, Maximos undertook the correction of their liturgical books, particularly the ‘Triodion’*, which was crammed with mistakes, due to the ignorance of the copyists and translators.

However, apart from his literary work, Maximos showed great zeal in working for the moral improvement and enlightenment of the Russian people by means of his writings and sermons, firmly drawing out the essence and the deeper content of the Orthodox Faith, as against the superstitions rife among the Russian people at that time.

However, naturally enough, the reputation and prestige which Maximos had gained as a result of his learning, the favour which he enjoyed with the Tzar and his conflicts with the prevalent superstitions and pagan ideas of the time were unwelcome to certain ecclesiastical circles, who, moved to envy, awaited their opportunity to take their revenge. The opportunity came with the elevation to the metropolitical throne of Moscow of Daniel, Abbot of the Volokolamsk Monastery. However, the conflict between Daniel and Maximos was due mainly to the fact that Maximos regarded the appointment of Daniel as Metropolitan of Moscow as anticanonical and illegal, since it had been made without the leave of the Ecumenical Patriarch and thus was prejudicial to the unity between the Russian and the Greek Churches.

In an underhand and malicious manner, Daniel managed to turn the Tzar against Maximos by alleging that Maximos had protested against the divorce and second marriage of the Tzar, and that together with certain boyars he was conspiring against him. This resulted in the arrest and imprisonment of Maximos. To these accusations his slanderers added others of an ecclesiastical nature, for example, that he was a heretic, that he was perverting the Russian church books, that he insulted the Russian saints. Thus the synod which met under the chairmanship of Daniel in April 1525 sentenced Maximos to exile and life imprisonment in the Volokolamsk Monastery, where he was subject to appalling torture. The constant protests of Maximos against this unjust condemnation forced Daniel to convene a second synod (1531), which again sentenced Maximos to life imprisonment, this time in the Otrots Monastery in the city of Tver, and to lifelong exclusion from Holy Communion. Maximos remained a prisoner in this monastery for 20 years, during the course of which he composed a ‘Confession of the Orthodox Faith’ and two discourses in defence of his correction of the Russian service books. After the death of Basil, he petitioned the new Tsar, Ivan Vasilievich, for permission to return to Mount Athos, but the new Tsar, afraid that the sufferings of Maximos should become known outside Russia, refused to grant his request. Even when the Ecumenical Patriarch Dionysios and the Patriarch of Alexandria Ioakeim mediated with the new Tsar to let Maximos go free, so that he could return to the Holy Mountain, the Tsar remained totally adamant. All that they achieved was some improvement in the conditions of Maximos and that he should be permitted to receive Holy Communion.

Maximos remained imprisoned in the Otrots Monastery until 1551, when his friend the Abbot of the Lavra of St Sergius, Artemios, together with some boyars of good repute sought from the Tsar the release of this innocent convict. Their request was granted and the Saint, weakened by his hardships and the experience of imprisonment, was taken to the Monastery of St Sergius, where he lived a life of holiness for the rest of his days, finally gaining in his old age the profound respect and esteem of the Tsar Ivan Vasilievich. He breathed his last on 21 January 1556, in his 86th year.

His writings and letters deal with a variety of topics: dogmatics, apologetics, hermeneutics, moral and social issues, and met with great popularity and a ready response among the people of Russia. In view of his achievements, he has been justly described by modern scholars as “the illuminator and reformer of the Russians”. However, apart from this, it must be pointed out that immediately after his death, many described him as a ‘saint’, ‘martyr’, ‘great teacher’, and ‘prophet’. The honour and reverence in which he is held by the Russian people was demonstrated officially a century after his death, when he was proclaimed a saint of the Russian Church. This canonisation was officially ratified both by the Ecumenical Patriarchate and by the Patriarchate of Moscow in 1988. His feast day is on 21 January10.