The Idolization of the Self

It’s an oft-repeated refrain that, over the last centuries, people have been seduced by philosophical theories, economic projects and social systems, have forgotten God and have claimed independence from Him. Beguiled by promises of earthly happiness and devoted to the pursuit of material goods, we have neither the strength nor the inclination to raise our heads from the dust of our mortal nature and to gaze upon our Heavenly Father. Even when we’re trapped in the continuing morass of multiple problems and we hear others stating with authority that the crisis isn’t economic, but principally one of morality and spirituality, we refuse in practice to transform this acceptance into actions which would bring about our spiritual resurrection and halt the chaotic slide into increasing unhappiness. 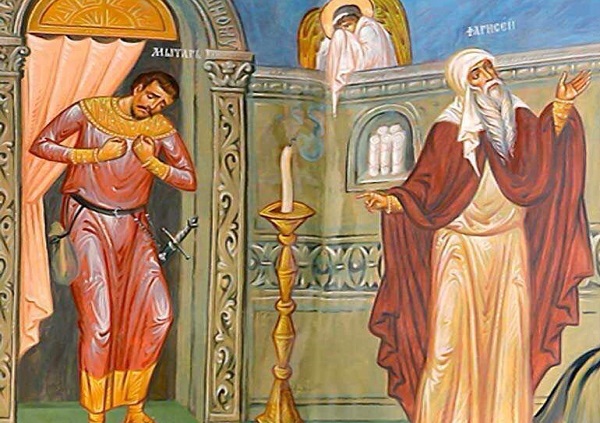 Moreover, since each of us seeks what is best for our own self, we confine ourselves to personal issues and are indifferent to those of society, the country, our neighbours… We think that looking after own interests is our sole duty and we act as if we’re the centre of everything. In the end, we come to the conclusion that it’s only our own views and theories that are correct and true. This completes the process of the deification of our self, a process which is so very different from the way of deification by grace to which we’re called by Christ.

Time of prayer
The parable of the Publican and the Pharisee marks the beginning of the most spiritual period of the year, the time of our preparation for Easter, the greatest feast of the Church. This period takes its name from the liturgical book of the Church, the Triodio, since its use begins with Vespers on the evening of the Sunday on which the parable is read and extends to the Vigil on Great Saturday. This period is therefore one of increased prayer, both in terms of quantity and quality.

It’s precisely because this time is an occasion for more intense and fervent prayer that the Church begins it with Christ’s own teaching on how to please God with our prayer. This teaching is contained in a story, this most instructive parable of the Publican and the Pharisee, which has been extensively analyzed over the centuries and has given rise to much discussion and reflection.

Its main feature is the simple observation of the spiritual dangers which dissipate prayer and make it an insult to the Holy Spirit, or, even worse, sacrilege. At the same time, the Lord points out the way in which prayer reaches the throne of God, is pleasing to Him, and brings grace to those who are praying and treading the path of sanctity and glorification.
‘He was praying to himself’.

It’s as if Christ had people today in mind when he described the Pharisee two thousand years ago. Clearly and without mincing His words, Christ stresses that, even though the Pharisee was in the Temple, he wasn’t praying to God, but to himself, whom he idolized. This accounts for his prayer, which was full of conceit and preening. ‘I’m perfect; everybody else has got lots of faults. I do what I should and even more than that; others don’t and are responsible for all the ills of the world. I don’t make mistakes, never err; others are full of sin, are always in the wrong and, worst of all, they don’t recognize that I’m superior to them’. Nothing about the prospect of the Kingdom of Heaven, nothing about the prospect of eternity, no reference to the Father and other people, but, rather, a general dismissal of the Father and revulsion towards others, or even worse, a powerful condemnation of the Father for all the faults of other people, who are in no way considered to be brothers and sisters.

People have always prayed. The problem is, however, where they were addressing their prayer. And this problem is especially pronounced today, when most people address themselves and not God at all. They try to find their own solutions to problems, difficulties and hardships, relying only on their own judgement and any abilities they might have, while, at the same time, being mistrustful of others. All they achieve through this, though, is to raise even higher the walls which isolate them from God and other people and which trap them in loneliness and despair.

Our own time has become self-destructive. We’re encouraged to believe only in our imperfect and weak self. We’re denied the option of a spiritual life, as well as dependence on God and His love. We’re trapped in the ‘here and now’ and are burdened with thorny problems, so that we’re constantly involved with them, waste the time of our life and are deprived of contact with the source of life and the cause of our existence. In all of this, there’s only one solution which will save us: getting down on our knees before the icons and, with the contrition and repentance of the Publican, praying ‘God, have mercy on me, sinner that I am’.