Sermon preached by Elder Meliton (Hatzi), Metropolitan of Chalcedon (1913-1989) in the Cathedral Church of Athens

There was nothing the Lord castigated so much as hypocrisy.

And rightly so, since He saw in it the greatest deceptive danger, which is the satanic light that appears to be angelic. The power of hypocrisy is, indeed, dreadful. Both for those who experience it and practice it, as well as for those who suffer as a result of it. The reason why it’s so dangerous is that it corresponds to the deepest psychological demand we have within us.

We want to appear to be people who we aren’t. Both to ourselves, as well as to God. And so we avoid the truth and simplicity and, naturally, repentance and salvation.

In a few hours, outside this church, outside its serenity, on the streets of this state, the Carnival will go past. Don’t deride it, don’t mock it, and don’t condemn me for referring to it at this moment. It’s not at all unconnected with the great problem of hypocrisy. Let’s regard the carnival this year with respect and reflection. It’s a very ancient phenomenon and an expression of a profound and agonized demand of the human soul: to be redeemed from our everyday hypocrisy through an expression of a new, anonymous, Dionysiac hypocrisy. 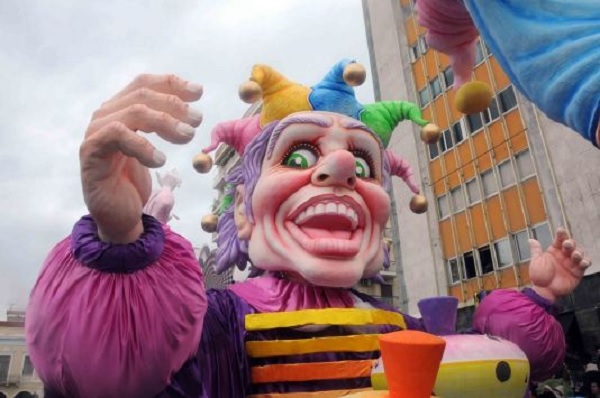 Those taking part in the carnival are tragic figures

They’re seeking to liberate themselves from pretence, by pretending.

They’re seeking to replace all the various masks they wear every day with a new one, as weird as possible.

They’re seeking to empty out all that’s stored away in their subconscious and to be free of it, but there is no freedom. The tragedy of those taking part remains unresolved. Our most profound demand is that we should be transformed.

Here we have the Church’s position, regarding the participants, those who are seeking transformation, the central message of Orthodoxy: Transformation.

Therefore, let’s not condemn those taking part, but let’s get behind their mask and listen to their angst, their cry for help, their tears.

I repeat, these people are seeking the most profound teaching of Orthodoxy as they make their way through the streets of the country: Transformation.

And they’re the most sincere and honourable of the hypocrites.

Perhaps you think I’m joking. Absolutely not. There’s no more serious problem for the Church at this time. It’s impossible for the impression to be given that the Church, especially the Orthodox, our own Church, has nothing to do with the life, the times, the anxiety of this moment, with the burning problems of this moment. As though it were a city set on a hill and simply observed what was happening around it. As a Church, we’re deeply involved with the progression of the human race, with this adventure we call History, leading to the perfection of the last times.

By dressing up the past, we absent ourselves from the present, and tomorrow will come without us. Speaking to the 4th Pan-Orthodox Conference in Geneva, I said: ‘The past is long gone, we don’t live even in the present and the day after tomorrow’s already upon us’. I repeat that even more strongly today. Because it is the truth beyond any self-serving pretence, that the easiest, simplest way of dealing with problems is to mock them, to condemn them and to pass by on the other side, as did the Priest and the Levite in the parable of the Good Samaritan. But the wound’s still here and it cries out for attention.

Can anyone tell us, with any sense of responsibility, that all these turbulent events and phenomena among young people today- the crazy music, the crazy dancing, the crazy clothing, the whole of the world-wide rebellion of youth- are evolving outside historical reality? If all the small-minded people, the voluntarily blind, those who look back and boast about the virtue of their own day conspire to condemn all these things, it’s the duty of the Church to provide Godly and human understanding- given that it’s the embodiment of our Lord in the midst of this new world which is coming from afar- and to listen to the anguished cry rising from what we think of as crazy things. Young people who are entering the stage of world history are trying to tell us something through all these phenomena.

We seniors think of these things as crazy, but we need to bear in mind the dreadful fact that one of the characteristic features of our times is the enormous gap there is in the succession of generations now. In other words, the generation coming after me is three generations away from me. How can we expect to understand this new generation which is coming unless we’re the Church of Christ, ever incarnate, continually transformed and continually transforming?
…

As individual Churches and Confessions, we shall not survive this approaching tidal wave unless we all unite in Christ Jesus. It’s time we freed ourselves from the anti-Patristic idea that only until a certain point in history was the Church able to interpret the divine Revelation. In the spirit of the Fathers, we, as the Church, have to shoulder the responsibility, the boldness and the courage of the Fathers and interpret Christ, the Gospel and the Church theologically. Not through prescribed medicine, such as, for example, the view of the Church as an institutionalized body, but of the Church as the Body of Christ, living in the Resurrection.

We’re now entering Holy Lent and at the end awaits the drama, the miracle and the experience of the Resurrection, the outstanding experience of the Orthodox Church. Let us proceed towards that experience and vision, not unforgiven, not unforgiving, not abstaining merely from meat and oil, not in hypocrisy, but in divine freedom, in spirit and truth. In the spirit of truth and the truth of the Spirit.

The points that Metropolitan Meliton makes about hypocrisy and the need for the Church to engage with all members of society, are, of course, absolutely valid in themselves.

Having said that, however, this is a very well-known sermon in Greece because of the sub-text. In 1970, Greece was firmly under the control of a military junta. Another very powerful force was the brotherhoods of lay theologians, which were heavily influenced by Protestant pietism and moralism. Monasticism was not encouraged -monks and nuns were sometimes described as ‘deserters’- and numbers on the Holy Mountain were so low that there was even talk of making it into a tourist venue. The Church in Greece, alas, decided to ride on the coat-tails of this strait-laced, secular Puritanism. I remember one of the first sermons I heard in the church of Saint Dimitrios, in Thessaloniki, where the (lay) preacher warned against the dangers of parties, the cinema, smoking and- the worst thing imaginable- allowing girls to wear trousers. Not a word about the oppressive nature of the regime, which included torture. Metropolitan Meliton was able to say what he did about hypocrisy and nostalgia for the ‘good old days’ because he was an outsider, belonging to the Ecumenical Patriarchate. The sermon produced a storm of reaction and ‘righteous indignation’.

Yet His Eminence was right. Three years later, the regime was brought down by a revolt by young students to whom the government and the Church hadn’t been listening. And because they’d been ignored, many of them left the Church, never to return. There is now a greater interest among young people, and, of course, a strong revival in monasticism, but those few years when the Church decided to play it safe and close its eyes to abuses have cost it and the country dearly.

As regards the remarks on the need for greater understanding between various Churches and Confessions, we should again remember that the sermon was preached in 1970. This was a mere seven years after the demise of that robust defender of High Anglicanism, C.S. Lewis, who was more than a little interested in Orthodoxy. The Fellowship of Saint Alban and Saint Sergius was thriving in Britain and it was a time of genuine optimism that some rapprochement could be effected. Since then, of course, Anglicanism and the Protestant Confessions have all departed so far from traditional Christianity that it is hard to imagine that His Eminence would still express the same position today. W.J.L.