The Other, my Brother

The way things are today, with economic matters dominant, as well as the various theories which stem from them, it’s clear that the value of the human person has been much reduced. We recognize it not only in the way people are treated as mere cogs in the production process, nor even in the way they’ve been transformed into official figures and numbers in registers. We see it in our everyday lives where what is cultivated isn’t a spirit of fairness but rather one of harsh competition, so that people are viewed as an enemy to be done away with. And in society, too, where the prevailing indifference leaves plenty of scope for the growth of weird phenomena and conditions of decline, which in turn lead to the unravelling of the fabric of society. In the prevailing practice, voices of an age long gone define some people as ‘wolves’, while there are those of alienated modernity who describe ‘hell’ as being other people…

And it’s been well-recognized for long enough that, whatever the technological achievements, economic indicators and practical opportunities, if the members of a society are not tightly knit among themselves, then that society is already in decline or hastening towards it. In other words, human relationships and a loving view of the other person signal a high value for the human being, with all the positives which that involves, such as flourishing spirituality, a productive culture, peace and reconciliation. 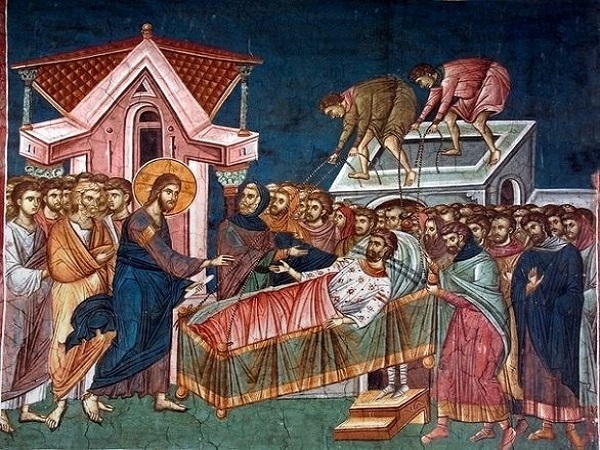 The faith of others
The Gospel reading for the second Sunday in Lent relates a miracle performed by Christ. As is the case with all His other miracles, what is miraculous isn’t the transcendence of the laws of nature in itself, but rather the instruction that the Lord passes on to us in order to correct our human modes of behaviour, to heal our way of thinking, and to teach and clarify the divine will for us. This is especially clear in this specific miracle, which is used to show us what a blessing it is if we pray, care for and actively engage not with ourselves, but with someone else.

Christ takes as his starting-point four friends who, when they hear that a famous, miracle-working teacher was in a house in their town, Capernaum, immediately thought of the fifth member of their group, who was paralyzed and unable to get about. They quickly got him onto a bed, which they carried on their shoulders so that they could bring him to the Lord, believing as they did in His miraculous powers. When they arrived at the house where Jesus was, they saw such a large gathering of people that they couldn’t even get in the door, never mind pass through to Him. Not to be deterred, they found another solution. They climbed onto the roofs of neighbouring houses, with the paralytic still on their shoulders, made a hole in the roof of the house where the Lord was and lowered their friend down, on his bed, right in front of Christ, as He was teaching the people.

What was Christ’s reaction? When He saw such faith on the part of the four men and of the paralytic himself, who had all combined in this extraordinary effort, Jesus gave a miraculous gift to the paralytic, for whose sake all this had occurred. He didn’t heal him. He did something much more important: He said: ‘Son, your sins have been remitted’.

The others’ reaction
What Christ said wasn’t actually what the five friends wanted to hear. Yet they accepted it. Not one of them tried to persuade the Lord to give them what they’d really been hoping for. The people who reacted badly were, in fact, those who’d never care at all about the paralytic until then. There was a group of Pharisees in the house who were there not to receive any benefit but in the hope of catching the Lord out. They said to themselves that Christ’s words concerning the remission of the man’s sins were blasphemous, since God alone can forgive sins.

So what did the Lord do? He was under no constraint to heed their thoughts, but, in order to avoid any misunderstanding or misconstruction of His words, He cured the paralytic, having first explained that the remission of his sins was of greater importance than the healing of his body. He did this to make clear that sin is the cause of sickness and mortality and that this must be removed first for the whole person to become well. Indirectly, He also pointed out to the Pharisees that He is the Son of God. In their understanding, God alone can forgive sins, but in this instance Christ forgave the man’s sins, as a precondition for healing his body.

Today’s reading shows how important it is for us to care for one another, to act on behalf of one another, to sacrifice ourselves for one another. On his own, the paralytic was unable to speak a word and ask for anything at all. What was granted to him was given at the request of others, his friends, through whose faith everything became possible. This is the path the Church has trodden throughout the ages, teaching: ‘Let no-one seek their own good, but that of others’ (1 Cor. 10, 24). It’s the way our worship is structured, with common prayer for other people, so as to show how God blesses prayer for others, for our neighbour, for our brother and sister.