Disbelief and God’s Tolerance of it

a) God’s tolerance, as a consequence of the mystery of divine self-emptying, is not limited to the Cross and burial. It continues after the Resurrection. The risen Lord had no wish to impose the glad tidings of the Resurrection on anyone, nor did He oblige people to embrace the message unconditionally. He consented, even as the glorified Lord, to being the object of investigation. He recognized that, as in Thomas, human ratiocination is an impediment to belief and, once again, tolerated human doubt.

b) Let us look briefly at the content of today’s Gospel, as described by Saint John the Evangelist (John 20, 19-29). After Jesus’ crucifixion and burial, His disciples scattered and their souls were overwhelmed with fear. Their teacher had been put to death in a most dishonourable manner. They themselves were at risk from the wrath of the Scribes and Pharisees. At the same time, they reacted with disbelief to the assurances of the myrrh-bearing women that they had seen the risen Lord. 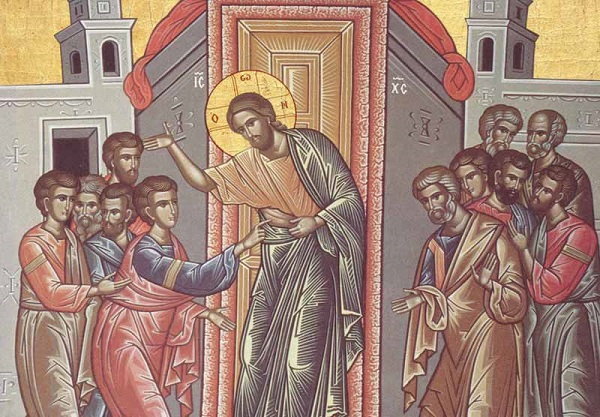 c) On the evening of Sunday, while the disciples were gathered in the upper room ‘for fear of the Jews’ and, even though the doors were locked, the Lord came in and said to them ‘Peace be with you’. He also showed them His hands and side. The disciples were overjoyed to see the Lord. He then blew on their faces and said: ‘Receive the Holy Spirit. If you forgive the sins of any, they are forgiven; if you retain the sins of any, they are retained’. Thomas was not with the others when Christ came, so they told him ‘We’ve seen the Lord’. He replied: ‘Unless I see the mark of the nails in his hands, and put my finger in the mark of the nails and my hand in his side, I will not believe’.

d) Eight days later and the disciples were once again gathered at the house, Thomas being with them this time. The doors were locked, but Christ came again and stood among them and said: ‘Peace be with you’. He then said to Thomas: ‘Put your finger here and see my hands. Reach out your hand and put it in my side. Do not doubt but believe’. Thomas answered: ‘My Lord and my God’.

e) The first part of the Gospel, referring to the appearance to the disciples without Thomas, is read in a variety of languages at the Agape Vespers on Easter Sunday. When you live the mystery of the Orthodox faith and your heart tastes the experience of the Cross and Resurrection, you feel the need to express this to the outside world. So the light of Easter is shed upon other peoples and races in their own language. In this way, even symbolically, we observe the Lord’s commandment to His disciples to preach the Resurrection ‘to all the nations’. Certainty of the truth makes it necessary to bear witness to it to everyone who is well-disposed. In the liturgical books, today’s Gospel is also written in Turkish and it used to be chanted in the Near East, where Turks and Crypto-Christians would have gathered to hear it.

f) Throughout the centuries, Thomas the Apostle has been the symbol of the ‘disbeliever’. But this was not actually the case. He was a genuine seeker of the truth. His doubt was sincere. He didn’t have any ideological axe to grind nor any anti-Christian spirit. This is why Christ responded and resolved his doubts. He came and agreed to be examined by His ‘doubting’ disciple. The liturgical texts talk about Thomas’ ‘good disbelief’ because it engendered solid faith. At the end of the Gospel, the Lord seems to reprimand Thomas: ‘Have you believed because you have seen me? Blessed are those who have not seen and yet have come to believe’. This represents a commendation for all the Christians throughout the centuries who have accepted and experienced the message of the Resurrection.

g) It may be that people will ask: ‘Why did the risen Lord appear to His disciples, to Thomas and the myrrh-bearing women instead of appearing directly to those who crucified Him, so that they could believe in Him?’ This question is answered by Saint John Chrysostom: ‘Had there been any possibility of attracting them to the faith after His Resurrection, He’d certainly have seized it. But the fact that no such possibility existed is clear from the case of Lazarus. Christ raised a man who had been dead for four days, stank and had begun to decompose. He gave him the strength to emerge from his tomb, still bound in the grave cloths, before the eyes of all. Yet this didn’t draw them to the faith, but rather inflamed them even more, since they determined to kill Lazarus, as well’.