Encyclical of Metropolitan Sotirios of Toronto for Holy Pascha 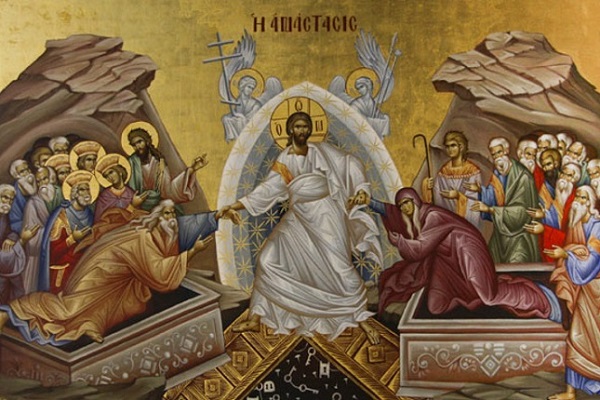 The Risen Christ and the World

The Resurrection of Christ is a historical event. It demonstrates that Christ is truly God, and that He is the expected Messiah who will return to judge the living and the dead.

The Risen Christ is the True God, which means that He perfectly embodies Truth, Life, Love and Goodness.

As soon as evil perceived that the ultimate Good was crucified and then resurrected, it revolted. It did whatever it could to hide the truth. It used deceit, lies and bribery. For its first wicked act, it bribed the soldiers who stood guard over the tomb of Christ. They were told to say that they slept while His disciples came and stole the body.

This tendency, as exemplified by the first act of evil, continues and perpetuates ever since. At the time, it focused on the soldiers. Now, evil draws on the world to cover up the truth of the Risen Christ. Instead of bribery, it promotes atheism, pseudo-religions and flawed ideology.

Faith in the Risen Christ spread through almost the entire world. It won over people with the power of love. What other religion or ideology grounds its entire teaching and being on love? Only Christ and Christianity. Seeing the progress of Christianity, evil was enraged. It responded to virtue, to the Risen Christ, as follows: ‘You aspire to love and forgiveness, I cling to hatred and war; let us see who will win.’

Evil draws on all means at its disposal: hatred, lies, murder. That is why we see most of today’s mass media turning against Christianity. They manage to present the immoral as moral. Lies and evil are passed off as truth and love. And that is not enough for evil. In addition to killing the human spirit, it also commits physical murder. Evil kills every year around one hundred thousand (100,000) Christians without any reason or justification, other than the fact they are Christians, and believe in love and forgiveness.

This is what the contemporary world does when confronted with the Risen Christ. It converts lies to truth, darkness to light, hatred to love. The present day reality is that the world is opposed to Christ, and staunchly hostile to the Risen Christ.

The Risen Christ foretold these things, but he also said that, “In the world you will have tribulation; but be of good cheer, I have overcome the world” (John 16:33).

You came here tonight to celebrate and partake of Christ’s Resurrection. Rejoice. Live the Resurrection deep within your hearts and minds. Fear neither the world nor death. The Risen Christ defeated the world. He trampled over death. We will die, but He will resurrect us. “Come, receive the light…”

With fatherly love and blessings in the Risen Christ,

Head of the Greek Orthodox Church in Canada