‘I am He Who is speaking to you’

The fifth Sunday after Easter and the Church presents us with the dialogue between the Lord and a Samaritan woman. This was a dialogue of real substance and a validity that will last throughout the ages, with a great deal to say to each of us.

Christ goes to Samaria, to the town of Sychar, to the place where the patriarch Jacob had made a well[2]: ‘And from the sons of Hamor, Shechem’s father, he bought for one hundred pieces of money the plot of land on which he had pitched his tent. There he erected an altar and called it El-Elohe-Israel [God the God of Israel]’[3]. He later gave this piece of land to his son, Joseph. So when Jesus went and stopped at the place where the well was, tired, and in the full heat of noon- ‘for it was the sixth hour’[4]- He waited for someone to come by and draw some water for Him to drink. He was the All-Powerful Lord. Couldn’t He have arranged to drink by Himself, without needing any assistance from others? At this point, He teaches us that we must have patience, must work together with others, help them and be helped by them: ‘bear one another’s burdens’[5]. We need to wait for the right moment for something to happen in our life and not expect everything here and now. 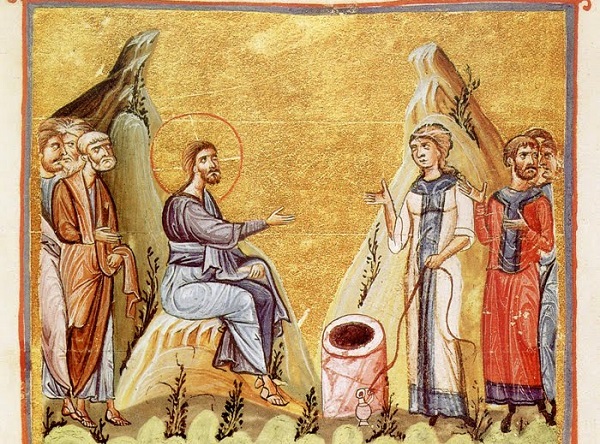 The Lord finds just the right time, knowing that, in that town, at that time of the day, there was a spiritual prey, as Saint John Chrysostom puts it, ready to be caught. One question is why the Lord distanced His disciples from the proceedings, sending them into the town to buy food. Chrysostom tells us that if the woman had seen all of them there with their teacher, she would certainly have made herself scarce and the prey would have been lost[6].

So a Samaritan woman comes to get water and the Lord says ‘Give me some to drink’ [7].Saint John the Evangelist mentions the provenance of the woman, a Samaritan, because for the Jews the Samaritans were idolaters. The woman was surprised that a Jew would speak to a Samaritan, since they hated them. At this point the Lord reveals His true identity. He reveals His role as the Messiah, telling her that if she knew Who it was Who was asking for water, she would be asking Him for water to drink, the water which, if anyone drinks of it, they will never in their lives thirst again. The Messiah declared that He was the ‘water of life’.

We should note here the allegoric interpretation given to us by Saint Maximos the Confessor regarding the five husbands whom the woman had had, and the sixth who wasn’t her husband[8]. The Samaritan woman represents the soul or nature of each one of us, which, without the prophetic gift, lived in accordance with the rules of our nature. Nature took as husband the first law, that of Paradise, then the second law, after Paradise, the third after Noah’s flood, the fourth that of circumcision after Abraham, and the fifth the law of the sacrifice of Isaac. These were the laws which our nature was given and which it rejected because it bore no fruit in terms of the works of virtue.

Saint Maximos also makes an allegory of the well, saying that it’s Scripture, the water from it is the knowledge contained therein and the drawing of it is learning the word of God by the letter. This was not what the Lord offered, since He Himself was the Word of God. He didn’t give eternal wisdom, which never has any end, to those who believed in knowledge from study and learning, but to those who were worthy from the point of view of spiritual grace[9].

We should mention that, among the many gods in whom the Samaritans believed, they still retained some form of belief in the God of Israel. They did so not because they knew this God but out of respect for Israel, who had once lived among them. This is why the Samaritan woman spoke of ‘our father, Jacob’[10]. The Samaritans would certainly have heard the prophecy concerning the star that was to arise from Jacob[11].