After fifty days from our Lord’s glorious Resurrection our Holy Orthodox Church celebrates Pentecost. This feast day is very important for all mankind, because it is the birthday of our Church. It is the day on which the Church, the Body of Christ, begins to function as the living organization in which one finds salvation. It is the day, on which Christ’s promise, that He will send the Holy Spirit, the third Person of the Holy Trinity, is fulfilled. It is the day, when the Holy Spirit appeared as tongues of fire and entered into the hearts of the Holy Apostles and the rest of the disciples opening their mind of understanding. It is the day, when God called all mankind to the unity of the True Faith in Christ Jesus, His only begotten Son and the Saviour of all. 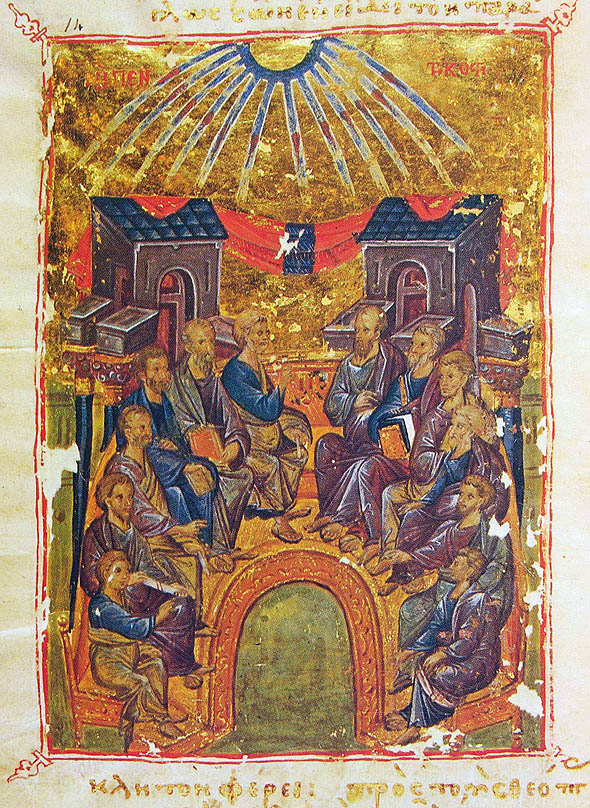 During ancient times, when mankind was one nation and spoke “one language, and of one speech” (Gen.ll:l), man thought in pride and said to one another: “Let us build us a city and a tower, whose top may reach unto heaven; and let us make us a name, lest we be scattered abroad upon the face of the whole earth” (Gen. ll:4). Man believed that he can reach heaven and be as god (Gen. 3:5). The result of their pride was that God confused their language so they could not “understand one another’s speech” (Gen. ll:7) and thus were scattered abroad from the land of Shinar (Gen. ll:2) upon the face of all the earth (Gen. ll:8).

Mankind was separated from the unity of being one nation, because of pride. Man away from God strived for material achievements. His heart abandoned the One and only True God and served false gods, which he himself created in his own imagination. Day by day, year after year, many centuries passed by, and man was drifting further away from the true knowledge of God. In his struggle and inner desire to give a logical explanation to the natural events around him, he believed that behind each natural phenomenon was a divine force which he called gods. St. Paul in his epistle to the Romans teaches us, saying the following: “For since creation of the world His invisible attributes are clearly seen, being understood by the things that are made, even His eternal power and Godhead, so that they are without excuse, because although they knew God, they did not glorify Him as God, nor were thankful, but became futile in their thoughts, and their foolish hearts were darkened. Professing to be wise, they became fools, and changed the glory of the incorruptible God into an image made like corruptible man – and birds and four-footed animals and creeping things. Therefore God also gave them up to uncleanness, in the lusts of their hearts, to dishonour their bodies among themselves, who exchanged the truth of God for the lie, and worshiped and served the creature rather than the Creator, who is blessed forever. Amen” (Rom. l:20-25).

Christ our Lord and Saviour came into the world born of the Virgin Mary and of the Holy Spirit and became Man. The Word of God the Father took up “flesh and dwelt amongst us” (John l:l4) as the unique God-man. He revealed to us the true knowledge of God. Through His Sacrifice on the Cross, He offered to all mankind the opportunity “to become children of God, to those who believe in His name” (John l:ll).

If one loves and believes in Christ, he shall receive the promise of receiving the Holy Spirit, as the “Helper” who shall abide with him who follows and keeps His Commandments (John l4:l5-l6). He is the Third Person of the Holy Trinity, “the Spirit of truth, whom the world cannot receive, because it neither sees Him nor knows Him” (John l4:l7).

No one in history ever dared to say: “I am the Way, the Truth and the Life. No one comes to the Father except through Me” (John l4:6). Many great men passed through History; many philosophers have spoken wisely about God, life and the laws of nature, but none had ever said that they are the Way. Only through Jesus Christ, who is the Son of God, man can find his way to the Father, because, “He who has seen (the Son) has seen the Father” (John l4:9).

This Way is shown by our Holy Orthodox Church to all those who desire to follow Christ and be with Him. The Orthodox Church is the original Body of Christ, which is guided by the Holy Spirit. Christ taught us saying: “I still have many things to say to you, but you cannot bear them now. However, when He, the Spirit of truth, has come, He will guide you into all truth; for He will not speak on His own authority, but whatever He hears He will speak; and He will tell you things to come” (John l6:l2-l3).

Within the Body of the Orthodox Church one finds the Way for salvation. Outside the Church no one can achieve salvation, because, he who refuses the Grace of God, granted to man through the Holy Sacraments of the Church, is actually denying the act of the Holy Spirit, Who wishes to save man. Man commits the sin of blasphemy against God, when he refuses, by his own free will, to accept the Gift of salvation offered by the Holy Spirit. “And anyone who speaks a word against the Son of Man, it will be forgiven him; but to him who blasphemes against the Holy Spirit, it will not be forgiven”(Luke l2:l0).

As the workers, who built Noah’s Ark, did not believe in Noah’s preaching of repentance and they all died in the Flood; so likewise, all those who do not come to the knowledge of truth within the Church face the danger of losing their salvation. Christ died on the Cross in order to offer man the Spirit of truth (John l6:7), Who testifies Christ (John l6:26) and reveals all whatever He hears (John l6:l3).

On the day of Pentecost l8 different Nations from all around the world were gathered in Jerusalem and they all heared “a sound from heaven, as a rushing mighty wind”, which “filled the whole house” where the Apostles were sitting. “Then there appeared to them divided tongues, as of fire, and one sat upon each of them. And they were all filled with the Holy Spirit and began to speak with other tongues, as the Spirit gave them utterance” (Acts 2:2).

On this day the prophesy of the Prophet Joel was fulfilled. “And it shall come to pass in the last days, says God, that I will pour out of My Spirit on all flesh; your sons and your daughters shall prophesy, your young men shall see visions, your old men shall dream dreams. And on My menservants and on My maidservants I will pour out My Spirit in those days; and they shall prophesy. I will show wonders in heaven above and signs in the earth beneath: Blood and fire and vapour of smoke. The sun shall be turned into darkness, and the moon into blood, before the coming of the great and awesome day of the Lord. And it shall come to pass that whoever calls on the name of the Lord shall be saved” (Joel 2:30, Acts 2:l7-2l).

Man is no longer in darkness, but stands in the light of Christ. There is no greater honour, my beloved friends, than to be an Orthodox Christian. When we were baptized, we received the Gift of the Holy Spirit within us and we have no need from anyone who stands outside the original Body of the Church to come and speak or even to deceive us.

The Grace of the Holy Spirit is granted to man, who believes in Christ, not because of his understanding of God’s Grace, but because of God’s Love towards man. Man is unable to understand God’s Grace. Neither can anyone put restrictions to whom and when God shall grant His Divine and Saving Grace.

This is the way which our Orthodox Church teaches. This is the way how the Holy Apostles taught us and we have received. Therefore, no one has the right to change what we have had received here and two thousand years ago. This is why everyone of us must be alert and not to give attention to any false teachings, which are blasphemies against the Holy Spirit. We must not allow ourselves to fall into spiritual traps and to be deceived by different types of groups, who proclaim that they have the Spirit of God and speak in strange tongues.

We must not only know, but also practice in our daily life our Holy Orthodox Faith. We must realise that we have within us the Grace of the Holy Spirit and it is up to us to lead the life which He wants us to live.

For all those who abandoned, in their weak moments, or needs, without knowing or examining their Holy Orthodox Faith, believing that they have found the truth elsewhere, I have only one thing to say to them: That they should repent, humble themselves and through Holy Confession return to the Orthodox Faith. One must not find different excuses in order to justify his wrong doing of falling into heresy. As for example many say that “it is the priest’s fault”, or that “we do not understand”, or they place their own selfish opinion above the Teachings of the Church and they continue pouring out so many excuses. But what excuse will they find to say to God, when He will ask them, if they ever made the effort to learn about Orthodoxy? What will they have to say to the Holy Spirit, when God will ask them: Why did you not first examine? Why did you not practice your Orthodox Faith? Does not the Church teaches us to practice God’s Commandments? Does not our Church teaches us to love one another, to forgive our enemies and all that Holy Scriptures says? Does not our Church say all time: Read the Bible daily?

Today we pray to the Holy Spirit for their return, but it is up to them if they wish to return.