The Offspring of the Barren Woman

Apart from the Nativity of Christ, our Church celebrates the birthday of only two other people: Our Most Holy Lady, the Mother of God and the Honourable Forerunner, Saint John the Baptist. And it’s natural that the birthday of the latter should be honoured, since the Lord Himself praised him as being the greatest among those born of women.

The fruit of prayer
It has rightly been said that the upbringing of a child begins long before it’s born. If the apple’s going to fall close to the tree, the apple-tree itself needs a great deal of care and proper growth. Both the parents who gave us Saint John the Forerunner were righteous and blameless before the Lord and observed all His commandments. Only God knows how much effort and how many tears were shed in prayer before Saint John was born. 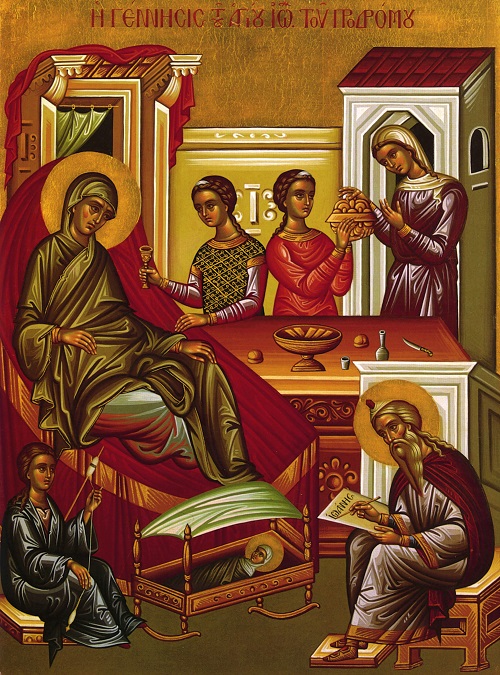 Referring to the joyful promise of the Archangel Gabriel to Zechariah- that he would obtain a son- Saint Theodore the Studite cries: ‘What a promise the angel delivered! The fruit of so many persistent prayers. Zechariah effected what he begged for with such zeal. After fruitful prayer, Elizabeth’s sterile womb was re-opened and her longing to have a child was satisfied’.

Of course, Zechariah’s human wariness towards the archangel’s announcement doesn’t, in fact, lessen his devotion to and trust in God’s almighty power. Saint Theodore defends him, saying: ‘Since he has upset, he adopted a defensive attitude. Because joyful messages that promise the realization of unusual expectations for the soul usually cause turmoil’. The question ‘how can I be certain about what you’re telling me?’, isn’t the result of disbelief, but of a need to verify the truth.

Is there a holiness gene?
The archangel also said something to Zechariah which might scandalize some people: that his son would be great before God and would be filled with the Holy Spirit even while he was still in his mother’s womb. It would be a great mistake to understand this prophecy as meaning that even a few people are pre-destined by God to become saints and that therefore they go the glory of Paradise without being asked and obviously without any preparation on their part. That would mean that God had abolished their free will and therefore hadn’t made everyone in His own image. Away with such blasphemy!

If it were so, why would Saint John have chosen to spend the whole of his life in the desert? Saint Ignatij Brianchaninov makes the point at that Saint John chose this way of life precisely in order to guard and keep the grace of God which he’d received as a gift from the holy life of his parents. The fact that Saint John is the greatest saint, after Our Lady, was not a given, but the fruit of the cooperation between the grace of God and his own harsh struggle. This is why the grandeur of his holiness was sealed by his voluntary acceptance of imprisonment and his martyr’s death by submitting to the will of God.

Judas also had the grace of God in abundance, from Christ, and initially was able to perform miracles in the name of his Teacher. But by willingly allowing himself to become subject to the passion of avarice, he lost everything. And many others who strove mightily in the spiritual life and were formerly endowed with grace also fell away because they didn’t heed Saint Paul’s warning: ‘Let those who think they stand firm beware, lest they fall’ (1 Cor. 10, 12).

The role of the family as precursors
It’s worth noting the end of the prophecy of the Archangel Gabriel to Zechariah: ‘and he will go before him in the spirit and power of Elijah, to turn the hearts of the fathers to the children, and the disobedient to the wisdom of the just, to make ready for the Lord a people prepared (Luke 1, 17).

It’s impressive that the fundamental element in the preparation for the reception of the Messiah is the establishment of a proper family and, in particular, the guarantee of healthy concern on the part of parents for their children. Only in this way can people acquire the functioning sensory organs to recognize the coming Saviour of the world, their true Father, and can love Him.

May the prayers of the saintly parents Zechariah and Elizabeth on the birth of their holy child support and enlighten today’s parents in building homes which will have as their prime purpose a genuine welcome to the Lord, Who ‘has visited and redeemed His people’ (Luke 1, 68). Amen.