The Holy and Sacred Synod of the Ecumenical Patriarchate met at Fanari on Wednesday, 29 August 2018 under the chairmanship of Ecumenical Patriarch Bartholomew, and, on the recommendation of the Canonical Committee, decided to include the late Archimandrite Elder Amfilohios Makris in the list of saints of the Orthodox Church. Through the prayers of the saint, Christ our God, have mercy upon us. Amen. 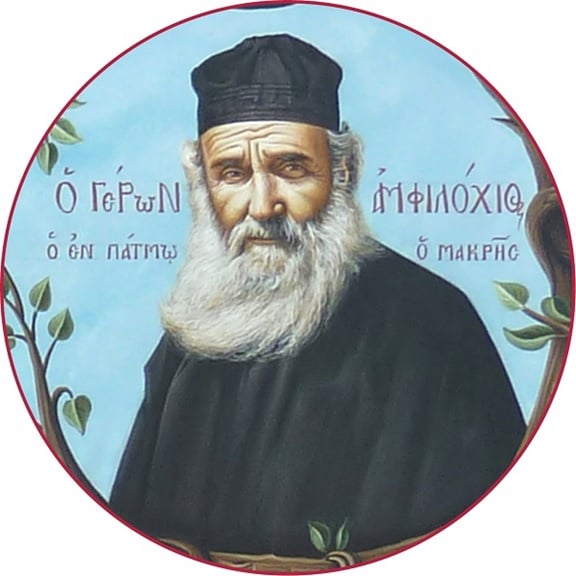 Elder Amfilohios Makris was born on the island of the Revelation, Patmos, in 1889. He became a stout defender of Orthodoxy, since he had suffered greatly during the Italian occupation of the Dodecanese islands. In those years, he founded many secret schools and made certain that the Greek language and the Orthodox faith would continue and would be passed on to the young people of the island, despite the efforts of the Fascists and the Church of Rome to cut them off from their roots.

For many years he was the Abbot of the Monastery of Saint John the Theologian on Patmos. He also founded the women’s monastery of the Annunciation in 1937. Much has been said about his many virtues, his love, his humility and his paternal love for his spiritual children. The late elder also laboured for monasticism and Orthodox mission work. Throughout the long years of WWII and afterwards, he travelled as a preacher. Moreover, he also founded monasteries on a number of Greek islands and was in charge of orphanages and various other charitable institutions. Saint Amfilohios fell asleep in the Lord in 1970.

‘Please observe this commandment. Insofar as you’re able, cultivate love for the person of Christ to such a degree that, when you speak His name, tears will flow from your eyes. Your heart must actually burn. Then He’ll become your Teacher. He’ll become your Guide, your Brother, your Father and your Elder’. Saint Amfilohios Makris.

Apolytikion.
Tone Pl. of the 1st. The Co-beginningless Word.
Let us all praise Amphilochios, the new star of the Church of Christ, truly the ornament of the island of Patmos, the beauty of monastics and lover of piety, the lamp of prudence; he intercedes to the Lord that He may have mercy on our souls.

Kontakion.
Tone 3. The Virgin Today.
In the last days father, you have shown to be a boast of the Church, shining with the virtues; wherefore we cry out to you with reverence, deliver us all from dangers, Amphilochios, the divine glory and pride of Patmos.

Megalynarion.
Rejoice the beauty of Priests, rejoice the revered ornament of Venerables, rejoice the glory and boast of Greece and of all Orthodox, O Amphilochios.