In the Gospel [for the 10th Sunday of Matthew], concerning the young man who was possessed, we’re given the opportunity to examine the shortcomings in the way we bring up our children.

Bringing children up outside Christianity

If we’re to see the shortcomings in the way we bring up our children we need to look at both the children and who’s doing the teaching. Since, apart from society, the children’s teachers are the family and the school, we shall examine the nature of the children, the parents and the teachers. 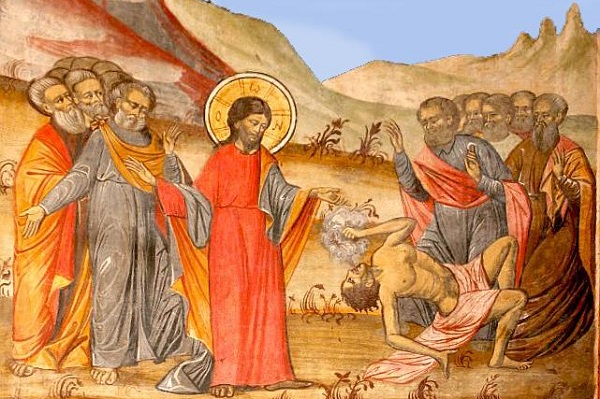 First, the children. From the Gospel reading, we understand that the young man ‘is sorely afflicted. He often falls into the fire or into water’. Life teaches us that, despite the simplicity and sincerity that children have at a young age, the more they grow up the more children suffer from egotism, stubbornness, jealousy and the other passions which are, beyond question, flaws associated with childhood. The image of the possessed young man in the Gospel isn’t actually that different from that of healthy children, often enough. All young people, when they’re under the influence of a passion, are volatile, withdrawn, and ‘sorely afflicted’. The badness that springs from our first ancestors, Adam and Eve, is hereditary and is therefore found deeply rooted in all children*.

Secondly, the parents. We learn from the Gospel reading that the father was a man of little faith and that the Lord called him and the others ‘a faithless generation’. It was because of this lack of faith that the young man hadn’t been cured until Christ Himself appeared. You see how the imperfections of the parents impact on the upbringing of their children, especially when it comes to the faith. In particular: the way that couples aren’t as careful as they should be as regards modesty, the weaknesses they allow their children to witness, their attachment to money, to the extent that any loss of it is a shattering experience. All of these things have terrible effects on children. It’s not parents advice that affects them, but rash words spoken at inappropriate times. Children are inflammable material as regards these careless words, because, in a sense, they spy on their elders!

Third, the school. The possessed young man wasn’t cured by the apostles, because, as the Lord Himself confirmed, they didn’t have sufficient faith or prayer. If even the apostles were unable to heal the young man because of their lack of faith, how much more true is this of schools, where the teachers are unbelievers. It’s possible for well-educated but non-believing to pass on a great deal of knowledge to their students. What they can’t do, however, is expel a demon. They make no effort to root out jealousy, lying, deceit, stubbornness, anger and the other passions that ferment in the soul of the child, because the attention of the school is directed towards knowledge, in the sense of memorizing and weighing evidence. This is what the school develops and assesses. How can the school expel the demon, when the child is so bad and the school, without Christ, is so weak?

The father of the young man, who became aware of the inability of the boy, the apostles and himself to effect a change, brought him to Christ. We, too, who know full well that the flame of the passions burns in our children and that the family and the school are unable to bring them up properly, should bring them to Christ, because He alone is able to expel their demons.

* Archimandrite Ioïl is of course, making two distinct points here. I had a friend, a Professor of Biology, who spent the whole of his academic career, trying to produce mutations in fruit flies (he was a Darwinist). He succeeded in producing malformed specimens, but, much to his chagrin, their progeny reverted to type. In the same way, it must be obvious by now that each generation is as bad and as good as the one before it. If we’re foolish enough to believe that we can build on the achievements of others, we’re doomed to disappointment and will end up like Ozymandias. This is not to say, however, that, given the human child with all its imperfections, we cannot influence it towards the good- but only for as long as it lives. By God’s grace and by His providence, this is a wonderful thing. WJL.