The Truth of the Faith as a Struggle for Life

People today, who are indifferent towards so many things, are also indifferent to matters of the faith. Naturally, some sociologists and anthropologists are not slow to interpret this phenomenon as ‘the end of faith’. And there are historians who analyze it as ‘a turn towards modernity’ which is typical of our times. But, as will become clear below, none of this is true, both because there have always been people, throughout the course of history, who have been indifferent to religious matters and also because if the souls of such people ever warm, they become fervent in the faith, to the point where they surpass, spiritually, many who have been in the Church for years.

One of the causes of indifference is the sense which many people have that they know quite enough about the faith. If priests and lay people say a couple of words to them about the Gospel, they receive the answer: ‘We know all about that’. They then go on to invoke whatever religious knowledge they’ve retained from their childhood in order to demonstrate a command of the theology of the Church which is sufficient to meet their spiritual needs. This is even more the case now when religious education in schools is epistemological and cultural, with a very slight nod towards Orthodoxy as the dominant faith in Greece. [The author is writing here specifically about Greece, but readers elsewhere will no doubt recognize a similar situation in their own countries, since the phenomenon is widespread. WJL] Be that as it may, the faith and the spiritual life aren’t matters of knowledge to be learned from books, but are, rather, experiences which people have to acquire as gifts of God and which demand willing effort and struggle. 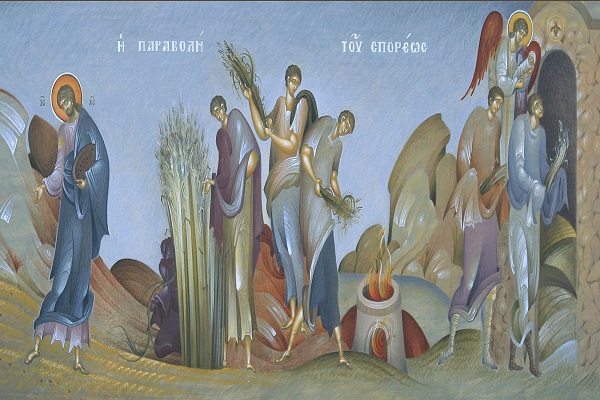 The aim of the parables
Today’s Gospel reading presents the well-known, graphic and detailed ‘Parable of the Sower’, as well as an explanation of it by the Lord Himself. But between the narrative and its interpretation, there is recorded the particular question of the disciples concerning the exposition of the parable, and thereafter a word from the Lord which is based on a prophecy in Isaiah. The disciples ask the meaning and significance of the parable and the Lord replies: ‘To you it has been given to know the secrets of the kingdom of God; but for others they are in parables, so that seeing they may not see, and hearing they may not understand’.

Many Protestants and some people who are admirers of an exclusively historical ‘interpretation of the Bible’ misinterpret this as meaning that Christ deliberately spoke in vague terms so that His teaching would not be readily comprehensible and would therefore not provoke the various groups of Scribes and Pharisees, as well as the Romans, all of whom were watching Him carefully. In this way He would escape their wrath. We can see the weakness of this interpretation when we recall that Christ went freely to His voluntary passion and that those who tried to discourage Him, such as Peter, were met with sharp rebukes (Matth. 16, 23). So how can it be claimed that Christ spoke in parables in order to hide and not provoke people?

And again, how can we reconcile the fact the He Who came to bring us to ‘all the truth’ didn’t speak clearly, but used these forms of speech? Cyril of Alexandria explains: ‘The parables are like images of things which can’t be seen, but are more mental and spiritual. This is why that which the eye of the body is unable to see is revealed to the eye of the mind, through the use of perceptible and almost tangible things, which gives shape to the subtleties of the mind’. But the aim of the parables is not merely to instruct.

‘To know the secrets of the Kingdom of God’
When Christ refers to the parables, He’s talking about the mysteries of the Kingdom of God. Let no one be deceived by imagining exactly what mysterious, conspiratorial or apocryphal thing lies behind the words of the Lord. Everything’s explained later. It’s simply that Christ wishes to use the two-fold properties of the parables in order to simultaneously reveal and conceal: they clarify the truth for those who are seeking it in their lives, while not declaring it to those who are remiss and disinclined to do so, even though they may have been momentarily impressed.

Christ is talking about the spiritual state of the Jews of His time and describes them as ‘hardened’, that is, too hard and unable to receive the truth of the faith. Typically, they had superficial religiosity and tremendous self-centredness. This is why He says that they’re ‘uncircumcised in their heart’ (Acts 7, 51). How was He to reveal the truth to people with such spiritual symptoms, which, over time, can be observed in the whole of humankind? But on the other hand, how could He be unfair to those who were genuinely seeking the truth?

Christ establishes the truth of the faith as a struggle for life. Truth exists, it’s been revealed, but it’s not for everyone’s eyes. In particular, people who are negligent and indifferent will misunderstand it, or they’ll feel coerced by its existence. Christ wants us to turn freely and whole-heartedly to Him and His truth which is why, for the preservation of free and selfless love, He has arranged for us the period of apprenticeship which is the dominant feature of the lives of the saints. And this lies in a continuous apprenticeship in the truth of the faith- not in the reading of books, but in the practical experience of our spiritual struggle and the sacraments of the Church. The saving truth of the faith, as the only truth on earth, is the most important and valuable thing God gives us, but, in order to acquire it we have to earn it with whole-hearted love and eager striving. We have to see that it can’t be exhausted but that the secret mysteries of the glory of God are continually and increasingly being revealed.