The deaf man and another who was blind
Some time later, two people were walking along the road, one of whom was deaf and was holding the hand of the other, who was blind. The blind man heard wonderful hymn-singing and joyful, melodic voices and said to the deaf man: ‘If only you could hear the melodic hymns that I can, brother. And I wish I could see the form of the wonderful singers’. The latter said he could just about hear, very faintly, some of the singing. They left the road and made their way to the place where the sound was coming from. As they were walking along, the ears of the deaf man opened completely and he could hear clearly the sublime and wonderful melody. When they got to the church of Saint Theosevios, they didn’t see any singer, because it was angels who were praising God and, with this miracle, they made manifest the Saint. This is how the deaf man could hear plainly and the blind man was able to see again clearly. Astonished at this strange miracle, they worshiped and praised God and reverenced His servant Saint Theosevios. 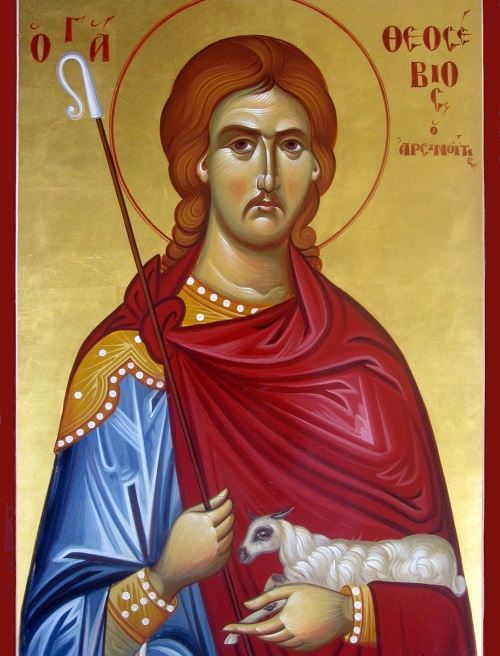 The lime
There was a monk who’d come from Byzantium and, after he’d built two kellia, lived close to the church of the Saint. The latter appeared to the monk one night in a vision and told him: ‘Dig in that place and you’ll find lime. Use it as it should be’. The monk thought it was his imagination and a lie, but out of curiosity he gave it a try. He dug down and found a lot of lime, which he used properly, as he’d been told to.