The winner of the trophy of love (In memory of the great Martyr, St George, the Trophy bearer)

Our Church today celebrates the feast of a martyr. If we try to pay any tribute to the celebrated martyr, we will demean him. This particular Saint is the glory of all martyrs, the boast of the Saints and the prestige of the Heavens and the Church Triumphant.  He is the all- mighty George. No Christian exists who has not called upon George’s sweet name, be it a baby or a man on his deathbed. There is no Christian country which does not boast of a church dedicated to his name, even if it is now in ruins. This guiding light of a Saint hides a great mystery not properly deciphered yet. Why do people love him so much? His love for people is so great that he prevents us forgetting him. Instead we are constantly calling his name. There’s always someone called George amongst any given three or four families. There is no family which has not received the assistance of the love of this Saint. 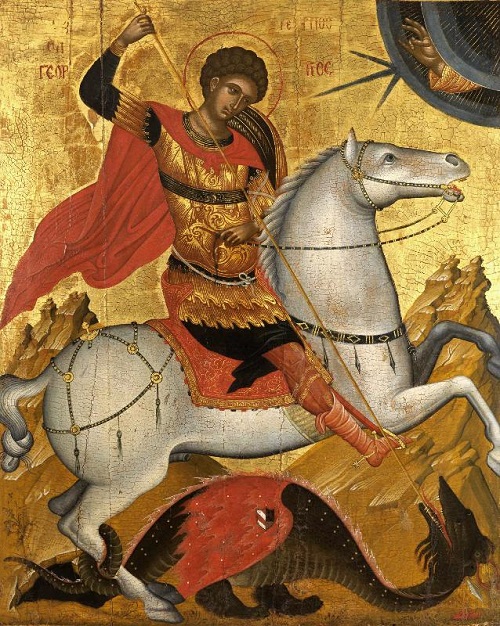 This particular hero has managed to perfect his Christian capacity not only through his confession of faith but also through martyrdom. And he continues in the same vein after his martyrdom. He has embraced the Church and the faithful of all ages throughout the universe. Even in places where Orthodoxy is unheard of and the mist of idolatry still covers everything, he descends uninvited and offers the presence of his love. He was aptly named by the Church as ‘Athloforos’(Accomplisher) , Tropaioforos’ (Trophy-bearer) and ‘Great Martyr’. All martyrs are described as ‘great’ because they have sacrificed their lives and have demonstrated their perfect love for our Jesus. However in my opinion the descriptions ‘Athloforos’ and ‘Tropaioforos’ do not refer so much to the courage he had shown during his torment as to the fullness of his love, verified not only in his lifetime but also unto to the end of ages. This love has enabled him to intervene and prevent even the slightest form of suffering and offer his support to anyone calling his name.

For us, being monks, St George is our nurse and protector. The 9nth Ode of the Saint’s canon says: ‘You, the Holy Mountain, take special delight. Dance now and be joyful because you have found George the Great as your best guardian’. He stands second only to the Lady Mother of God as a protector of this place and of the monks. Four monasteries and several Sketes and huts are dedicated to his holy name.

In his biography it is said that his father, Gerontios was also a martyr. George espoused Christianity from a young age. At the age of 22, he bought the title and became an Earl. When he was about to be awarded the title, he noticed that his superiors were preparing the persecution order against the Christians. He was astonished that the decree was blatantly ordering the extermination of the Christians without any reason. He took off his belt and threw it at the officers and declared: ‘I am a Christian. I will not obey your decree’. His ordeal began right from that very moment. This great martyr, despite being so young, patiently put up with all the insults and humiliation without losing his temper. He persevered during the horrid torture, showing fatherly forgiveness and affection. He performed miracles to convince them so as not to demean the power of grace – even though he knew that they wouldn’t believe in the Lord. While performing the miracle he declared: ‘I will do it, but you will not believe’. He even raised from the dead someone who had been buried for three hundred years.

We are considerably moved by his forgiveness. He could have reprimanded them but didn’t. He could have been reproachful but instead he was very kind.

As monks, we make him an example, especially his bravery and his selflessness because he toughens us during our own martyrdom of conscience (μαρτύριο συνειδήσεως). The executioners were asking the martyrs: ‘You either deny Christ or you die’. And they did not deny Him and died. We do not have to go through this questioning. However, we do face the secret struggle against the spiritual tyrant who is constantly testing us. It is as if he is warning us: ‘You will either worship the multifaceted idol of sin or I am going to launch temptations, sickness and tribulation against you’. And we vehemently reply: “‘you shall worship the Lord your God and him only shall you serve’ (Matthew 4, 11). We derive great courage from this mighty man, indeed! We are kindred spirits. He did not spare fortune, values, titles, opulence, all lying in front of him; he even gave up his very own life for the love of Jesus.

In our present difficult hour, we believe that the Lord, who is the same now as He was then, will demonstrate the same Fatherly affection and sympathy to us, strengthening us in our wretchedness. On our part, we persist with the same frame of mind to believe in Jesus, to obey Him and prefer His love against all others. It is for His sake that despite our weaknesses we have walked away from the stream of secular confusion and vanity. We have denied our family, even our very own nature and found ourselves in self inflicted exile, holding on to the same hope. By freely extricating ourselves with the assistance of the grace of our Jesus from the causes of sin and temptations, we wish to practically prove that we genuinely love Him while abhorring the devil and sinfulness.

Occasionally we fail in our goal out of inexperience, ignorance or weakness but we never change our intention. We constantly declare that we worship the Lord God and serve only Him. We also declare that ‘we believe everything to be rubbish’ in the face of His love, deriving courage from the innumerable martyrs who have walked the same path and left it to us as a legacy. We wholeheartedly believe that divine Grace will abide by us and that we will also attain to our goal. In this way we manage to accomplish two feats: Firstly, our own salvation and secondly, we offer support to our brothers who remain in the society and carry a tough and heavy burden, fighting against all odds, facing so many hardships and trying to confess their faith without denying Him to the best of their ability. Angels are the beacons for the monks and the monks are the beacons for the Christians in the world. For, they are not able to meet people like St Antony the Great, St Paisios or St Pahomios these days. These holy people are gone. We, the humble monks, are stepping in their shoes, holding on to the same insignia, following the same path and tradition and walking the same route.

Let us all seek St George’s love, with the proper frame of mind, since he is looking for such excuses to employ his all powerful mediation and fortify us in our struggle. For it is said: ‘Blessed is he who has kin in Zion and relatives in Jerusalem’. Behold, we boast that St George is our kin and our relative. We have praised him with meager words, in order to offer him the excuse to fulfill his divine-like love and grant us the heavens. Amen.