‘When he was at table with them, he took the bread and blessed, and broke it, and gave it to them. And their eyes were opened and they recognized him; and he vanished from their sight’. So we’ve seen how, initially, Christ walked along with the disciples in such a way that they didn’t recognize Him and that then He was revealed to them, ‘at the breaking of the bread’. Christ appears in a different form and is recognized at the breaking of the bread, that is, through the holy sacraments, particularly the Divine Eucharist, where we partake of His body and blood in the form of bread and wine, at which point we have the feeling and the certainty that Christ Himself has entered into us, irrespective of the fact that our eyes see only bread and wine. 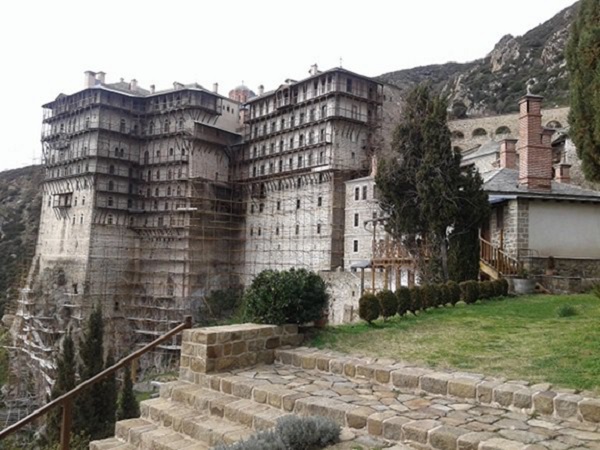 The Holy Monastery of Simonos Petras

‘And he vanished from their sight’. They recognized Him at the breaking of the bread and He then departed in the blink of an eye. If He’d stayed after being recognized, they wouldn’t have understood Him properly, because they’d have regarded Him and interpreted His presence differently. They’d have thought that He was only there, with them, whereas, in fact, the Lord is everywhere present. This disappearance before the eyes of the disciples also reveals another mystery which God’s providence enacts in order to train us. When the Lord dwells within a person through the energy of His Spirit and that person contemplates Him, He then departs, so that the soul which loves Him desires Him all the more. Therefore, all those who have known Him in this way have further testimony to His resurrection. Confidence in the preaching of the Apostles, who were eye-witnesses to the Lord’s resurrection now becomes a personal experience, a personal testimony to the fact that the Lord rose indeed.

This personal witness to the fact that the Lord did, indeed, rise, confirms for us His victory over death. He crushed the power of the devil and we are no longer in thrall to the grave and death but have resurrection and eternal life as our destination. And not only this. We also have a greater right to share, to be involved, to have a place in the unfading day of His kingdom and complete participation in His eternal glory.