During the reign of the Emperor Diocletian, a devout and wealthy Christian couple, Dorotheos and Evsevia, being childless, asked God to give them a child, and promised to dedicate any such offspring to Him. Their prayer was heard and, one Sunday, they had a daughter, whom they named Kyriaki, for that reason [“Kyriaki” means “the Lord’s day”, from “Kyrios” meaning Lord. Another word derived from this is “kirk” or “church”]. They baptised her and brought her up “in the discipline and instruction of the Lord”, according to Saint Paul (Eph. 6, 4) and, true to their promise, kept their daughter unmarried, in order to offer her to the service of the Lord. 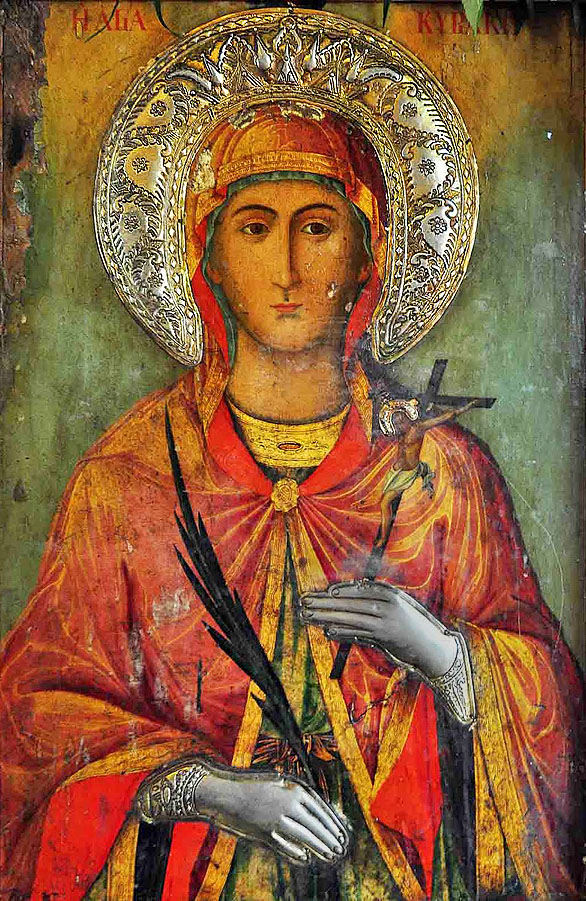 One day, a rich idolater who happened to be staying in the city, heard tell of the beauty and character of the young maiden and decided to give her in marriage to his son. But when the proposal was made, Kyriaki  declared that she was betrothed to Christ and that her desire was to die a virgin. The furious idolater reported both her and her parents to Diocletian for not submitting to his authority. The ruler summoned them and demanded to know why they rejected the gods of the Empire. Dorotheos replied that he had learned from his parents not to worship any but the One God, the Creator of heaven and earth, Who assumed human flesh for our salvation. He was sent to be scourged. Despite the lashes, however, he continued to pour scorn on the idols, and so Diocletian, seeing that nothing was coming of such treatment sent both him and Evsevia to Justus, the governor of Melitini, in Lesser Armenia. He first tortured and then decapitated them, thus granting them the crown of martyrdom.

As for Kyriaki, Diocletian sent her to his brother-in-law, Caesar Maximian, who resided in Nicomedia. He admired the radiance of her beauty and brought her to trial where he promised to betroth her to a kinsman of the emperor if she would agree to honour the gods. The young maiden remained firm in her faith and declared that nothing could separate her from the love of Christ. The tyrant then ordered that she be stretched out on the ground between four stakes and lashed to death with a cat o’ nine tails. The exhausted soldiers changed turns three times, but the saint remained unaffected by the blows, which made her shine with divine grace. Maximian, assuming that, out of pity for the young virgin, the soldiers were not using full force, vented his wrath on them. The saint then addressed him and said: “Don’t fool yourself, Maximian. You’ll never defeat me because God is my helper”. Fearing fresh humiliation, Maximian sent her to Ilarion (or Hilarius), the governor of Bithynia, a man well-known for his brutality towards Christians. 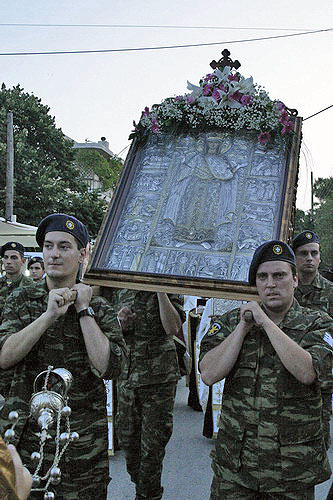 Once he’d been brought up to date by the delegation from Maximian which accompanied the prisoner, Ilarion threatened the saint with unheard of tortures. Kyriaki answered that it would be easier for him to bend iron than to bring her to submission, and this is why, when they raked her body with flaming torches, while she was hanging by her hair, she remained impassive, as if already attired in the incorruption promised to the elect. The following night she was visited in her place of confinement by Christ Himself, Who healed her wounds and promised to deliver her from all her trials by His grace. In the morning, the tyrant stared open-mouthed when he realized she was safe and sound, but, attributing the miracle to the gods, ordered that she be taken to the idols. On entering the temple, the saint knelt and addressed a prayer to Christ. At once the whole building shook, the idols collapsed to the ground, shattering into a thousand pieces which were dispersed by a whirlwind and forcing the assembled pagans to flee. Only Ilarion continued to mouth blasphemies, until a bolt of lightning suddenly pierced the sky and smote the governor in the face, upon which he fell from his throne and breathed his last. He was replaced by another governor, Apollonius, who, having been informed of the events which had the province in uproar, brought the saint to trial and sentenced her to be burnt alive.

They lit a huge bonfire and then the soldiers threw Saint Kyriaki onto it. She remained there for several hours, in prayer, with her arms stretched out to heaven, without the flames burning her in the slightest. And then, even though it was summer and the sky was clear, a black cloud appeared and a rainstorm put out the fire. Apollonius ordered that two lions be released against her, but no sooner did the savage beasts approach the saint than they became like lambs and lay down at her feet. Many of the idolaters who were present and witnessed these extraordinary events confessed Christ and were put to death on the spot. 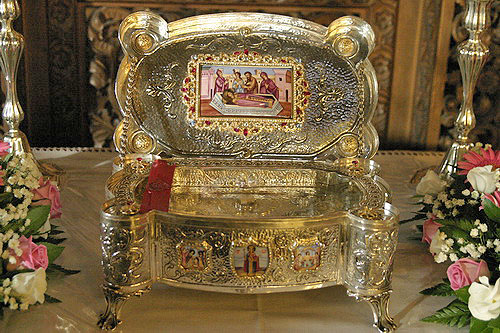 The next day, yet another cross-examination before the governor also proved fruitless. Realizing that he was in no position to defeat Christ’s bold warrior with flattery or torments, he condemned her to be beheaded. They led the saint outside the town and there she asked the executioners to allow her a little time to pray. She fell onto her knees and addressed a long prayer to Christ, Who had given her the strength to confess His name before emperors and princes and had preserved her in purity until the day of her mystical wedding.  Bright angels came to receive her soul and present it to her Bridegroom and the saint lay down gently on the earth. The soldiers who were preparing to behead her were amazed when they saw she was already dead. Then they heard a voice from the heavens telling them: “Go, brethren, and relate the mighty works of God”. When they had set off to make their report to the governor regarding what they had seen, Christians who had been in hiding for fear of the idolaters, came and took the saint’s body  and buried it in an appropriate spot, rendering thanks to God.