/ Contemporary Elders
Dr. Nikolaos Koios, Member of the Editorial Board, Pemptousia, Associate Professor of the University Ecclesiastical Academy of Thessaloniki

‘60 Years from the Demise of Elder Iosif the Hesychast’

The twentieth century brought seismic changes to social, economic, scientific and technological developments across the globe. It was marked by the two most bloody wars in history, which changed the map of the world. Striking personalities played definitive roles in the fate of humankind, leaving them with towering reputations, for good or ill.

In the middle of this turbulent and hugely unsettling period, a man was born, lived and died, a man whose personality would hardly have been noticed by people interested in analyzing the events which have shaped our own time. In the realm of the Spirit, however, his presence was to make an indelible mark on his generation, which, in opposition to the drift towards hedonism and consumerism which usually follows times of war and oppression, sought out the path towards the True Life. 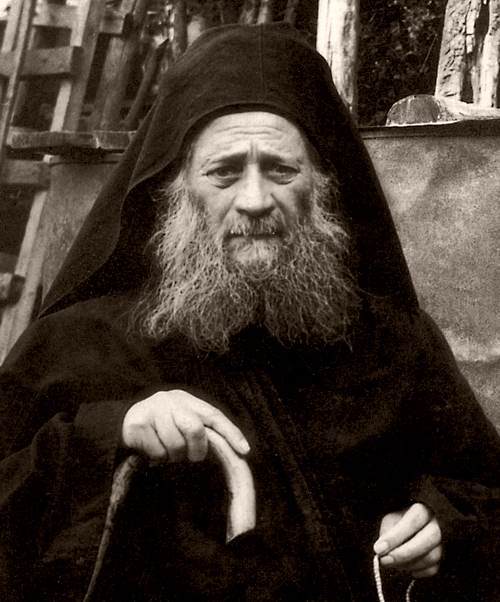 60 years have passed since the demise of blessed Elder Iosif the Hesychast, or Cave-Dweller, and his spiritual progeny now number many hundreds, perhaps even thousands. The insignificant scion of a poor, beleaguered, island family, he felt in his heart God’s call to respond and to love Him to the end. In the words of the cruelly kidnapped Bishop Pavlos of Aleppo, the boy was a ‘beggar of the Spirit’. He made a decision and, like a demented treasure hunter, sought the pearl of great price. In his quest, he never took a backwards step, in accordance with the dread Gospel passage: ‘Anyone who puts their hand to the plow and looks back is not fit for service in the kingdom of God’ (Luke 9, 62).

His own plow furrowed the harsh soil of the Holy Mountain of Athos, from the foothills down to the precipices of Little Saint Ann’s and the caves of New Skete, sanctifying, through his countless labors and temptations, both himself and his spiritual children, as well as the places where he was active.

He gave rebirth to a whole generation. He waged a harsh struggle against the passions, led an intense spiritual life, taking Holy Communion 3-4 times a week, withdrew to places of quietude and solitude, but never considered sanctification to be a personal affair. He lived in communion with others who were also striving, he submitted, taught, guided, and maintained correspondence. His message is one he lived, through the experience of Divine Grace: on the one hand sweet, but on the other full of authority. It creates a feeling of certainty that what is being described is not emanating from someone who is merely illumined, but from a true, sure guide.

The 60 years since his passing are as yesterday in the Athonite firmament. The older and younger monks, as well as clergymen outside the Mountain and lay people, recollect his spiritual repository with such clarity that you have the impression that he departed from us no more than a short time past. Fifteen years ago, an inter-Orthodox conference was held which highlighted the various facets of his teaching and personality. The spiritual wealth he bequeathed, however, is inexhaustible, since it is now bearing fruit in the persons of his spiritual offspring. This is why any mention of him is a rekindling of the spirit in those who are seeking freedom from the bonds of this age.

As a genuine spiritual offshoot of the root of Elder Iosif the Hesychast, the Holy and Great Monastery of Vatopaidi has been consistently involved in publications, seminars and other events in his memory, paying due honor by passing on his authentic spiritual message in all feasible ways, though always with the respect he commands.

In this spirit, Pemptousia, which is supported spiritually and materially by the Monastery in question, is starting a large-scale project dedicated to Elder Iosif the Hesychast, involving texts and interviews, for the spiritual benefit of visitors to the site, and indeed, for every soul seeking the authentic message of life through the new pulpit of the digital eco-system. The culmination of this effort will be the presentation of the new edition of the one hundred and thirty letters written by the blessed Elder, which have been kept in the Monastery’s archives at the behest of the revered Abbot, Elder Efraim.

We pray that the Elder’s vigorous seed will bear fruit in the heart and person of every soul willing to devote some of their limited time to the study of the work and spiritual testament bequeathed us by the Elder.