East is East and West is West?

to whom all this world flees for succour,

to have release from sin, sorrow and trouble,

glorious Virgin, flower of all flowers,

to you I flee, [who am] confounded in error!

You mighty, gentle lady, help and relieve me,

have mercy on my perilous sickness

My cruel adversary has vanquished me.

COMFORT is there none, but in you, dear lady,

for, lo, my sin and confusion,

which ought not to appear in your presence,

have brought against me a grievous action,

founded on strict justice and [my] desperation.

And as by right in justice they might well maintain

that I would be worthy of my damnation

were it not for your mercy, blissful queen of heaven.

I hope readers will agree with me that these two stanzas would, in terms of vocabulary and style, fit in well with the Orthodox Paraklitic Canons (Great and Small Canons of Intercession).

Compare, for example, the first stanza with the first troparion of the 4th ode of the Great Canon:

“And where, then shall I find other defence? Where shall I flee? And where shall I be saved? What other fervent helper shall I have in the tribulations and storms of life which have so buffeted me? In you alone I hope, draw courage and boast and I hasten to find sanctuary with you: save me”.

Or the second with troparion two of the 8th ode:

“Difficulties, afflictions and necessities have come upon me, pure Virgin, and misfortunes of life and temptations surround me on every side, but stand with me and help me with your powerful protection”.

The Great Paraklitic Canon was composed by the Emperor Theodoros II Komninos Laskaris (1222-58), who reigned from 1254-8. He was the son of Saint Ioannis Laskaris. Of sickly disposition and subject to bouts of melancholy and depression, he learned how to combat these from Saint Theodora, the Empress of Epirus, who encouraged him to address prayers of intercession to Our Lady. It should also be added that he was under considerable pressure from the Latins, the Arabs and even some of his own people. Whatever the origins of the canon, however, it remains a powerful cry from the heart for comfort in times of distress.

The poem from which I have quoted two stanzas is an acrostic by Geoffrey Chaucer (1343-1400). Technically it is an abecedarium, that is, the first word of each stanza begins with the appropriate letter of the alphabet. Thus, the two stanzas quoted are the first (A) and third (C). Chaucer is often called the father of English literature and one of his most recognizable stylistic features is his introduction of words from the French of his day. He was a wine merchant by profession and must have had regular contact with the language, both for reasons of business and because it was still the language in which the gentry communicated. A glance at the original of the first stanza demonstrates this (words of French origin in italics):

To whom that al this world fleeth for socour,

To thee I flee, confounded in errour.

Have mercy on my perilous langour.

But Chaucer was not at all the first to hymn the Mother of God in English. From very early on, she was held in high esteem and great affection, and there were numerous pilgrimage sites (perhaps the best known being Walsingham). Indeed, England was sometimes referred to as her “garden”. The Venerable Bede (7th/8th centuries) calls her “genetrix incorrupta” (Birth-Giver incorrupt) and “virgo imcomparabiliter benedicta” (virgin most incomparably blessed). St Aldhelm (8th c.) borrowed expressions from the Song of Songs: “garden enclosed, fountain sealed, dove amid threescore queens”, while Alcuin (8th c.) addresses her as “sweet love, honour and great hope of my salvation”. In the 9th century Book of Cerne  we read: “Mother of God… glorious and noble, chaste and inviolate… Pray for us, intercede for us, do not disdain to help us”. Of course, these were all written before the schism, so it should come as no surprise that there are similar Celtic, Carolingian and Latin poems.

Though Chaucer wrote after the schism, his poem is another indicator of a point that has often been made: that the Great Schism was a more gradual process than sometimes presented (from before 1053, when Patriarch Michael Caerularius ordered the closure of Latin churches in Constantinople until the sack of that city by Crusaders in 1204), and that ordinary Church life, faith and piety was not immediately affected. This is not to underestimate the differences between East and West in this matter. They were considerable- though not insurmountable- yet, for longer than was once thought, appear to have meant little to the vast majority of believers outside the small circle of prelates and ambassadors actively involved in the negotiations.

Another indication of this is a leaf from an antiphonary painted, not in England but in Italy, by Niccolò di ser Sozzo in about the year when Chaucer was born. It is obviously not Byzantine, but equally obviously is a representation of the passing from this life of Christ’s mother. Whether we call it the Assumption of the Virgin Mary, in the Western style, or the Dormition (Falling-Asleep) of the Mother of God, as in the east, the event is the same and recognizable as such. 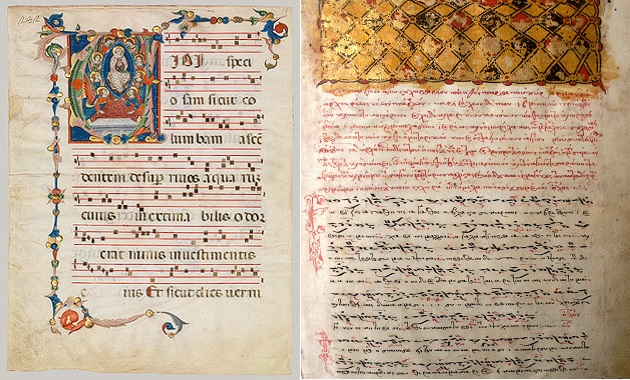 For those interested in a more detailed treatment of the influences and achievements of early English religious painting, there is an excellent book by Sir Edward Maunde Thompson, English Illuminated Manuscripts, which is now freely available on the Internet.