Hope in the Horror of War

The holy land of the Apostolic Church of Antioch is suffering from the horror of war. Yesterday, it was the turn of Lebanon and Iraq, and today it is that of Syria. Thousands of Syrians, including, bishops, priests, monks, nuns, and laymen, all of whom are the indigenous people of this land, have been killed, kidnapped, or forcibly expulsed. All these brutal actions systematically attempt to deprive the faithful of their hope.

In a special place in the midst of Syria, there is a touch of divine, unimpeachable hope. It is the war-torn city of Aleppo whose Metropolitan is His Eminence Paul Yazigi. Metropolitan Paul was kidnapped with the Syriac Archbishop of Aleppo, Youhanna Ibrahim. On April 22, 2013, Metropolitan Paul was shepherding the flock in the Holy City of Antioch. He received a call from Archbishop Youhanna to join him on a humanitarian mission to negotiate the release of two priests who were hostages of armed extremists. The two priests were: Fr. Isaac Mahfoud, a Greek Orthodox, and Fr. Michel Kayal, an Armenian Catholic. Archbishop Youhanna came to the Turkish border to collect Metropolitan Paul in order to go together and pay the ransom for the priests’ release. In the war, the bishops or priests took up the role of negotiators with the kidnappers in the name of their communities. Arriving by car at the outskirts of Aleppo, an armed group stopped the vehicle of the two bishops, abducted them, and killed the driver who was a deacon. For six and a half years now, no information is given about the state of the two bishops. They just disappeared. 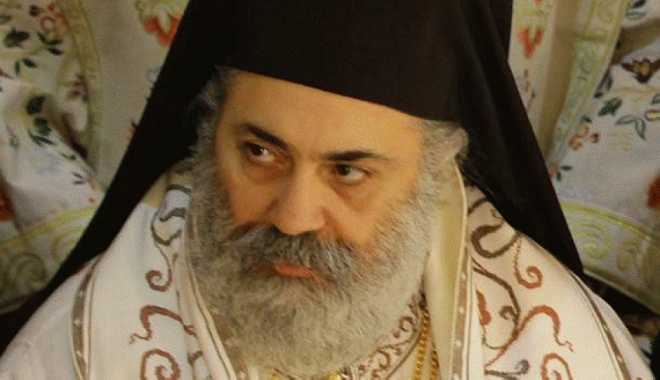 How did the Orthodox faithful of Aleppo survive the continuous absence of their bishop who is the icon of Christ?[1] St. John Chrysostom expresses well the situation, when he spoke about the absence of his Bishop Flavian of Antioch: “Just as a choir misses its leader and a crew of sailors its helmsman, so also this company of priests is missing its hierarch and common Father, today…. But even if he is not present in the flesh, he is, nonetheless, here in spirit, and he is with us now as he sits at home, just as we are with him as we stand here; for such is the power of love that it habitually gathers together and unites those who are separated by a great distance.”[2]

Metropolitan Paul has planted this seed of love in his Diocese. Despite their trauma, his parishioners’ expectation of his return has given them daily living hope. His absence made him more present and brought the parishioners together to pray more and live ascetically. They have felt more like the faithful husbandmen who await the return of their Master, knowing that their Master’s joy will be to see that his servants has grown the good seedling of love that he has planted. In the next passages, the challenges facing this Archdiocese of Aleppo, called “the diocese of Job,” are briefly presented focusing on three axes: Security, Economy, and Migration, with examples on how the Orthodox Church is kindling hope in the lives of the people there.

Security Challenges: The bombardment of the besieged Aleppo affected the daily lives of the people. More than fifty parishioners were killed. Most of the church building were desecrated and destroyed, including the historic archdiocese compound. It became fatal for one to get sick since the medical supplies were not available. Even rescue teams were not able to move quick enough to save who might be saved. A man lost his daughter and son on Holy Friday night 2015. A bomb fell on their house and blocked the room of their children. They were shouting and screaming… He waited for eight hours for the rescue teams to get and finish their work to discover that his two children had suffocated. The family now is in a refugee place in Germany. The husband turned to God through prayer, he became thankful… He wants to be strong for his traumatized wife and surviving daughter…. The pastoral touch was that of the prayers offered by the priests and their continuous care. No words could heal the tormented parents or children…, except God’s Word. Only “Prayer breathes hope…”[3]

Economic Challenges: The deterioration of the city’s infrastructure, the lack of electricity, drinking water, medicines and other necessities made life very difficult. With resources running out fast, getting enough food became increasingly more difficult. Some bakeries closed altogether, while others began working random days when they could get enough materials to bake bread to sell. People, however, did not even have enough money to buy food because of its soring prices, if it was available. For many, being hungry is not hard: what is hardest and unbearable is to see one’s children suffering from hunger. Faced with this vast amount of tragedy, the Antiochian Church did not stand idly by. She rather was determined to effectively care. His Beatitude Patriarch John X personally visited the besieged city, and comforted its faithful. He ordered the Department of Ecumenical Relations and Development (The name of the Humanitarian arm of the Patriarchate) to cooperate with the Archdiocese, and urgently prepare a range of projects and programs. The Department provided job opportunities for people so that they can work and live with dignity. The Church opened a charity dispensary which provides medical necessities, in addition to distributing medicines. The Church took care of the issue of education awareness and cultural development. She opened the Prophet Elias Kindergarten. The Church distributed basic food supplies to people who were rich few months ago and lost all their possessions. They were angry, disappointed, and sad. (The rich man and the holed sugar bag… the man whose family needed badly the food even though there was some worms in rice…). The Church tried to support them as persons created in the image of God.

Emigration and Displacement: In order to kill their hope of return to their homeland, many houses were demolished and historic church buildings were reduced to rubble. On account of this situation, the church has confronted with a harsh pain of the forced expulsion of some, the emigration of others to places outside Syria, the exodus of many to more secure regions in Syria. About fifty percent of the parishioners has left the archdiocese. The Church cannot stop them from leaving, but tries to create awareness about the importance of keeping the land of their ancestors, where “the disciples were first called Christians” (Acts 11: 26), and not give up. Despite the shrinking number of families due to hemorrhaging emigration, the steadfastness in faith of those remaining, the attachment of the youth to their church and the activities that they undertake, like a hive of bees ceaselessly working day and night to fulfill the mission of their shepherd Metropolitan Paul. The parish halls of the churches in Aleppo factories of hope for the suffering parishioners, such as the parishioners from Idlib who left all their belongings and walked for several days and nights before arriving to Aleppo. In their first gathering in the church hall in Aleppo, they looked at each other face and wept bitterly. The Church tried to facilitate their civil paper work after they lost all their IDs, gave them money, shelter, and food, and especially spiritual support. The pastoral care of the church deeply affected them, since they saw that the church is the One which gathers them and cares for them. This gave them a great hope in Christ, and much more attachment to His church.

The Church, the Bride of the Suffering Bridegroom, presents Christ through Her prayers and pastoral care to the faithful, as Hope Incarnate. This has given them great hope in the midst of great misery, a divine hope which cannot be described in mere words. This hope is the presence of Christ experienced by the three holy youth in the fiery furnace. This Hope is a great mystery that the Church administers in humility and love.