Sermon on the feast day of St Luke the Evangelist

On October 18th, our Church honors the distinguished figure of St. Luke the Evangelist. He was a Greek from the Great city of Antioch in Syria (today’s Antakya). It was here that he studied medicine, in a city that was renowned for the development of science, philosophy and learning. The worldly glory of a medical practice did not attract him, and he was drawn to Christianity by the preaching of St. Paul. When the great Apostle, during his Second Apostolic Tour, departed from Troas to Macedonia, St. Luke was there and followed him. From then on he became a valuable companion to St. Paul. The Holy Apostle assigned him to various missions to establish the Christian faith in different countries, and St. Luke successfully did so. St. Luke preached the Holy Gospel in Italy, France, Libya, Egypt, Dalmatia, Achaia, and Viotia in Greece (where his tomb is located). He always wanted to be at St. Paul’s side and minister to him as his doctor, helping the Apostle with his sensitive health and supporting him through difficult times. With this spirit of sacrifice, St. Luke was willing to accompany St. Paul when he was arrested by Roman soldiers in Palestine to be taken to Rome to be judged by Caesar. 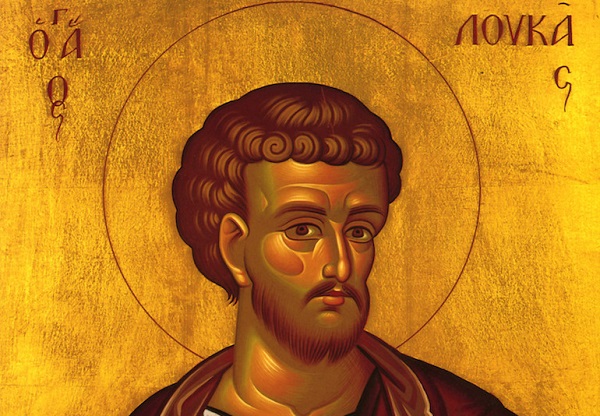 St. Luke shared St. Paul’s hardships, enduring the awful storm south of Crete, which resulted in the shipwreck near the island of Meliti (Malta). They abandoned ship and managed to reach land by floating on boards. During St. Paul’s second imprisonment in Rome, St. Luke remained greatly devoted to the Holy Apostle. With gratitude, St. Paul wrote to St. Timothy: “Luke alone is with me” (2nd Timothy 4:11). While some of St. Paul’s associates had abandoned him, St. Luke remained close to him until his conviction, and was a witness of the Apostle’s martyrdom. Later, St. Luke devoted himself to missionary work until he was 84 years old. He also had a talent for painting. According to the Tradition, St. Luke met the Holy Mother of our Lord, and painted the first images of the Virgin. One of them is the Icon of the Virgin that is found in the Kykkos Monastery in Cyprus. A copy of this Icon is kept in Antalya.

We are grateful to St. Luke the Evangelist, because he alone collected information about the Holy Mother of God, the Apostles, and events in the life of Jesus that are not mentioned in the other three Gospels. Additionally, he recorded the work of the Holy Apostles in the spread of the Church to other nations far away. All of this is written in the Third Gospel that bears his name, and its sequel, “The Acts of the Apostles.” He began his life as an idolater, but came to know the true God, Jesus Christ, Who is “The benefactor and the healer of all,” and his life was transformed. He wanted to imitate Christ in his life, and giving up his career as a physician, devoted himself entirely to Christ and His word. At the same time, he used his skills as a doctor to help St. Paul. Who knows if the Holy Apostle would have survived all of the wounds inflicted upon him by the beatings, stones, and frequent illnesses! That is why St. Paul calls him: “Luke, the Beloved Physician” (Colossians 4:14).

My dear brothers and sisters, on the occasion of the Feast of the Evangelist Luke, let us express to him our gratitude for the Holy Gospel and the Acts of the Apostles, which these holy books contain in the Bible. Let us all study them carefully to learn precisely the life, works, teachings of Christ and His Apostles, and the development of the Holy Church. And let’s ask him·

Luke, Apostle of Christ, author of faith dogma’, supporter of the Church· You, who attracted the ones who had been immersed in darkness to the depths of the True God and you saved them from the storm…pray to the Savior Christ and God, to offer us peace, a spiritual life, holy inspiration, enlightenment and His grace. Amen.