October 27th is the day the Church honors the Martyr St. Nestor, whose life and martyrdom are directly linked to the glorious Martyr St. Demetrios of Thessaloniki. It is for this reason that the lives and testimony of these famous saints be studied together.

In the beginning of the 4th Century, The pagan Roman emperors continued their cruel three hundred year persecution of Christians. In the midst of these hard times, lived St. Nestor, whom we celebrate today, and St. Demetrios, who was celebrated yesterday.

St. Demetrios was born and raised in Thessaloniki. His parents belonged to high society, and had taken care to give their son an extensive education. This education, along with his rare physical and spiritual gifts given by God, distinguished him in society. So much so, that his reputation reached the ears of the Emperor himself, Maximian Galerius. Acknowledging his gifts, he made him a general in the army and governor of the region. 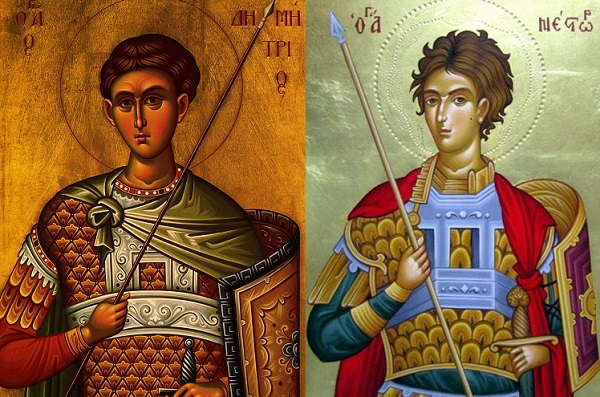 Despite his high position, St. Demetrios did not fail as a Christian to preach and teach with a missionary zeal. He served as a light for the idolatrous Thessalonians, leading them to Christ and His truth. When the Emperor heard of this, he ordered St. Demetrios to be brought before him. The Saint then boldly confessed his faith in Christ. As a result, he was imprisoned in an old public bathroom next to the stadium. There he suffered much hardship and tortures.

In 305 AD, the lords of the city organized fights and duels in the stadiums of Thessaloniki. During one of these contests, the great gladiator Lyaeus appeared in the middle of the stadium, loudly taunting the Christians: “Whoever dares, come and fight with me! Let’s see if your God will save you, who you believe to be stronger than ours!” With his sword in hand, he stood undefeated. Among those present in the stadium was a young Christian named Nestor, who was a student of St. Demetrios. He was very upset to hear these mocking words against the true God. Wanting to show the crowds the power of the God of Christians, he went to the prison where St. Demetrios was, to obtain his prayers and blessing to fight Lyaeus. With this done, he entered the stadium and challenged Lyaeus. Crying out: “God of Demetrios help me!” he defeated and killed the gladiator. This made the Emperor Maximian very angry, and he gave the order for both St. Nestor and St. Demetrios to be executed. The soldiers beheaded St. Nestor in the stadium, and then went to the prison where they killed St. Demetrios with lances.

Naturally, these shocking events strengthened the faith of Christians, and confounded the pagans. They began to see the Christians in a different way. Later, at the tomb of St. Demetrios (where he was martyred), myrrh began to stream forth. Many people came quickly to receive this myrrh, in which many miracles were done.

My brothers and sisters, we as Christians are not facing the same level of persecutions that the Holy Martyrs mentioned today endured, although there are still countries that persecute Christians. Our own challenges are different. How do we deal with them?

St. Demetrios was a high official, and in constant danger of arrest. Despite this, he still taught the young people about Christ. He inspired them with strong faith, courage, and even the spirit of sacrifice for Christ’s sake. Do we have this same courage, or are we timid? Do we fear being thought of as “backwards?” St. Nestor refused to allow Lyaeus to mock and blaspheme Christ. How do we respond when we hear such slanderous disdain and insults towards Christ and His Church? When the Saint decided to face Lyaeus, he did not rely on his own power, but on the power of Christ. He first ran to beg St. Demetrios to intercede for him with God, and received a blessing to succeed in his struggle. When he finally confronted the gladiator, he sought the help of the true God, whom his teacher St. Demetrios believed in. So it was only natural that he gave credit for the victory not to himself, but to God and St.Demetrios, who interceded for him and gave him strength. Do we give thanks to God and those who helped us? Or do we selfishly claim glory for ourselves, bragging and boasting?

My brothers and sisters, May the Lord, by the intercessions of Sts. Demetrios and Nestor, with all the Saints, increase faith, boldness and love for Christ in our souls. May we receive many spiritual victories in the struggle against the visible and invisible enemies of Christ. Amen.