The blessed martyr Iakovos (James) was born in the village of Voevonades, which is not far from Kastoria and was baptized Ioannis. His parents, Martinos and Paraskevi, were poor but devout. Apart from Ioannis, they had another son and the parents divided what they had between them. Ioannis became involved with stock-breeding and did well for himself, though this caused his brother to envy him. He left him his sheep and went to Constantinople, where he engaged in sheep and meat trading, becoming a supplier to the Ottoman court. This trade made him rich. One day he heard from a leading Muslim that Patriarch Nifon has healed his wife of demonic possession. This brought Ioannis to the Patriarch, by whom he was instructed and to whom he confessed. In this way, he was admitted into the mysteries of faith in God and decided to distribute his wealth to the poor and go off to the Holy Mountain.

Once he’d visited all the monasteries, he settled at Doheiariou, where he was tonsured as Father Iakovos. He lived for three years at the Monastery of Doheiariou, in strict asceticism, unquestioning obedience and profound humility. From there he went, with his abbot’s blessing, to the small, dilapidated house of the Honorable Forerunner, not far from the Monastery of Iviron. He lived there for six years as a disciple of Elder Ignatios, struggling fiercely against the demons, repelling their assaults in the name of Christ and with the assistance of Our Most Holy Lady, the Mother of God. 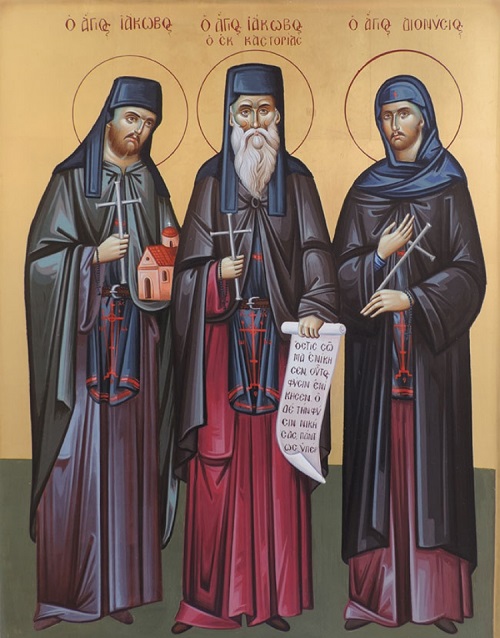 After a revelation in a vision, Monk Markianos came to this house and became a disciple. Through his good offices, another monk was accepted into Elder Iakovos’ brotherhood: Father Theonas, who until then had been a monk of the Monastery of Pantokrator and who would go on to become Metropolitan of Thessaloniki. In 1517/1518, Iakovos went with his disciple to the Monastery of Vatopaidi to meet Metropolitan Makarios of Thessaloniki, who recognized his sanctity and was full of praise for him. A monk of the Monastery of Vatopaidi became a disciple of Elder Iakovos.

Following a request from the monks of the Holy Mountain, Iakovos was given authority by the Bishop of Ierissos to become a confessor, even though he wasn’t a priest. Even though he was only an ordinary monk, he confessed lay people, monks and even the clergy at the Monastery of Vatopaidi. Because he wanted to live in greater quietude, he abandoned the house of the Honorable Forerunner and withdrew with his six disciples to the desert of Mount Athos. He didn’t stay there long, because, after a revelation, he decided to leave the Holy Mountain and go to Aitolia. On the Friday of Bright Week, 1518, he left the Holy Mountain with his disciples. They passed through Thessaloniki, the fortifications of Petra on Olympus, and the Meteora, where they met Metropolitan Markos of Trikala. They then arrived at the Monastery of the Honorable Forerunner, in Dervekista, in Aitolia. They stayed there less than a year.

Iakovos’ good reputation played an important role in the fact that large numbers of Christians from all over came to him for confession and to get his blessing. The Bishop of Arta, Akakios initially welcomed Iakovos happily and sent him a friendly letter giving him permission to confess others. A little later, however, because of the miracles Iakovos performed and his gift of foresight, the bishop was deceived by some members of his close circle who denounced him to the Turkish governor of Trikala on charges of sedition. Eighteen soldiers were sent to arrest him.

He and his disciples had just had Holy Communion when the Turks entered the monastery. The saint welcomed them most warmly and left with them and his two disciples, Deacon Iakovos and Father Dionysios, offering no resistance. On the way, he healed one of the soldiers in the guard through his prayers. He was interrogated in Trikala, and, although no culpability was established, he and his two disciples were imprisoned. The governor was holding out for money from the Christians who held Iakovos in high esteem before releasing him. They spent forty days in prison.

From Trikala, the three went to Adrianoupolis and from there to Didymoteikho, where the sultan, Selim, was staying temporarily. At Didymoteikho they were tortured badly on the orders of Selim, whose imminent death the saint foretold. They were then taken back to Adrianouplis, where they were tortured for seventeen days. Strips of skin were cut from the saint’s flesh, his disciples were whipped, their legs were broken and their wounds were cauterized with lit torches. Finally, the decision was taken to hang them. At the place of execution, Saint Iakovos prayed, lifting his hands to the heavens and thanking Christ for counting him worthy of martyrdom. After he and his disciples had partaken of the sacraments, which he had hidden in the breast of his habit, he fell to the ground and his soul departed. His last words were: ‘Into your hands, Lord, I commend my spirit’. The Turks hanged his corpse and his two disciples on 1 November 1519.

Their relics were purchased by Christians and transferred to Arvanitohori, three miles from Adrianoupolis, where they were buried. Every Sunday and on feast days a bright light would shine from the graves of the saints.

After the martyrdom, Saint Theonas and other disciples gathered on the Holy Mountain and three years later, in 1522, they were able to fetch part of the relics of the New Martyrs to the Holy Monastery of Simonos Petras. When they left and went to the Monastery of Saint Anastasia (1522) just outside Thessaloniki, they took the relics with them and they are there to this day.