How Our Lady Gave Holy Communion to those who Labored

At the time of Saint Savvas, many virtuous monks lived in his lavra, serving the Lord. Then a rich, virtuous leader, of noble stock, also went to live there as a monk and the saint received him gladly.

Since he wasn’t used to hard work, Saint Savvas was careful of him and didn’t allow him to go out with the others to do heavy agricultural work. They would work until the ninth hour, return and read the service all together and, after Vespers, would eat. Once a day, in common.

Since the man couldn’t do this, because he was a beginner, the saint told him to work in the monastery as much as he could and to fast until the return of the brothers, when they would eat all together, in accordance with the rule. But he didn’t observe even this command. In his cell he would eat various foods brought to him by his relatives.

The saint knew about this, but, because this monk was just starting out, he didn’t intervene, but simply asked God to correct him. 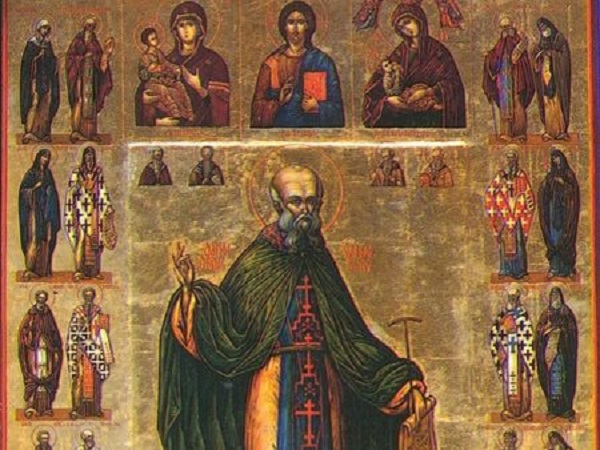 The feast of the Mother of God came, 15 August, and on the morning of the day before, the saint told the brothers to return early, in order to sing. He told the beginner to go to the church at the time for vespers and to inform him when all the brothers had gathered. Which he did.

When the brothers came [to the service for the feast], the beginner saw a wonderful vision, while he was awake, not asleep He saw a very beautiful woman between two angels, shining brighter than the rays of the sun. One was holding a chalice full of heavenly bread and the other and the other a delicate square of cloth.

This beautiful woman, who was Our Lady, was holding a gold spoon. As the monks came up in turn, the angel wiped their faces with the cloth. Then they bowed before Our Lady and she gave them Holy Communion on the spoon.

The beginner was lost in wonder when he saw this and also went up to receive the sacrament, but was unable to do so. The angel didn’t wipe his face and Our Lady didn’t offer him the sacrament. Instead she said to him: ‘This food is the Body of my Son, which is received by those who have fasted until now and have been cleansed. You don’t fast, though. So how can you receive this Bread?’

He answered: ‘At least let the angel wipe my face with that sacred cloth’.
The reply came: ‘If you want your face to be wiped with that cloth, you have to work hard with the others. They were sweating from their labors and this is why they had their faces wiped. What sweat would the angel wipe off your face?’

On hearing this, he was alarmed and ran to the Abbot: ‘Did you perhaps see the vision that I’ve just had, unworthy though I am?’

The Saint answered: ‘What you saw was for your correction. The brethren know that Our Lady sanctifies them so that they’re worthy to receive the holy sacraments at every feast’.

From then on, he, too, worked harder and ate less. He lived in blessed obedience and thus gained heavenly bliss.

From «Αμαρτωλών Σωτηρία» (The Salvation of Sinner), by Agapios Landos.