The Passion of Hypocrisy

‘Hypocrite, doesn’t each one of you loose his ox on the Sabbath?’
On a number of occasions, the religious leaders of Israel condemned Jesus for breaking the Sabbath commandment by performing miracles on that day. ‘And for this reason the Jews persecuted Jesus and wanted to kill him: because he did these things on the Sabbath’ (John 5, 6). They had fallen into the delusion of apparently observing the commandments rigorously, or, as one commentator puts it ‘they pretended to be devoted to God’. The most likely explanation is the second version, since Christ’s enemies were consumed with envy of Him. In today’s Gospel reading, we see Christ in a synagogue, on a Sabbath, healing an infirm woman, and the leader of the synagogue condemning Him for breaking the Sabbath commandment. Then the Lord, Who reads all hearts, reveals the passion within the man, by calling him a hypocrite (Luke 13, 15). Let’s have a look at this passion of hypocrisy.

The hypocritical leader of the synagogue
Theofanis Kerameas made the following important observation regarding today’s miracle performed by the Lord. As is well known, on the Sabbath everything closed down and no-one did any work. In order to heal the sick ‘He granted the infirm a Sabbath’, in other words, He closed their illness down. Put even more simply, He stopped the operation of the sickness and set the invalids free of their subjection to bodily sufferings. The leader of the synagogue, however, burned with an inner passion of envy towards Christ and, although he pretended to be devout, he was looking for a chance to attack Him. With the healing of the woman, ‘the wickedness inside him spilled out’ and began to spread to the outside. His mask fell and his true face showed. He was a hypocrite. [In plays in ancient Greece, an actor wore a mask representing a particular person. For this reason, the word for ‘actor’ was ‘hypocrite’. WJL]. 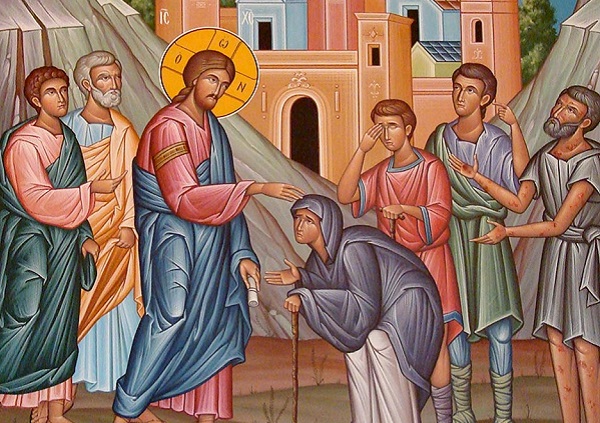 Here’s another observation, by Saint Cyril of Alexandria, according to whom the leader of the synagogue was a hypocrite, a ‘dissembler and conniver’ as well as being ‘jealous’ This envious person preferred to see the woman crawling about on all fours rather than assuming a normal human form, in other words walking the way normal, healthy people do. He preferred that to the possibility that Christ would be ‘magnified and proclaimed as God through these matters’, that is the miracles He performed. His judgment was impaired. It was the judgment of a hypocrite.

The passion of hypocrisy
The passion of hypocrisy is both terrible and repulsive. Saint Gregory, the poet, remarks that ‘there are, there are some who are more wretched’. Such people are ‘amphoteric’ [two-faced] when it comes to faith. They don’t respect the things of God and fluctuate* in their words. To the weak, hypocrites are lions, but to the powerful they’re fawning dogs. They honor whatever pleases other people rather than what’s in their best interest. Hypocrisy is a condition that makes us duplicitous. In the life of the Church, hypocrites mock both God and other people. Envy, which is the mother of hypocrisy, makes people bear ill-will towards the best, as if they loved the worst.

In fact, hypocrites, who have cunning minds, often manage to escape the attention of other people. They can deliberately hide and not express their true feelings. Sometimes they work behind the scenes and are dark-horses, acting strangely. They pretend to be pious, but in their private life they don’t observe the laws of God and brazenly do whatever they want, even if that’s not in accord with the Gospel or the traditions of the Church. They give the impression of being a bosom friend of another person and then find an opportunity to betray them. They’re split personalities: they want God but are drawn by the world; they’re attracted by the word of God, but also desire empty things. Most often, wickedness and the world triumph in the minds of hypocrites. If they’re exposed, they’re the most wretched of people and are disreputable Christians. Various hypocritical clergy and laity have done untold damage to the flock of the Church. They’ve been the reason why many people’s faith has withered.

My brothers and sisters,
Hypocrisy is flourishing in the world and also in the realm of the Church. There are people who strive for piety, justice and sanctity, but who, in their private lives are impious, unjust, harsh and utterly lacking in God’s grace. The straighter you are as a person, the more the grace of God shades and blesses you. No matter how attractive hypocrites are in their manners, they repel us. People who are genuine, on the other hand, even if they have no other great qualities, attract other people. They’re the ones who’ve become the saints of our Church and may we imitate them in our lives.

* Again a reference to the theater, since the word, Saint Gregory uses (‘Euripoi’) has the same root as Euripides, the Greek playwright [WJL].