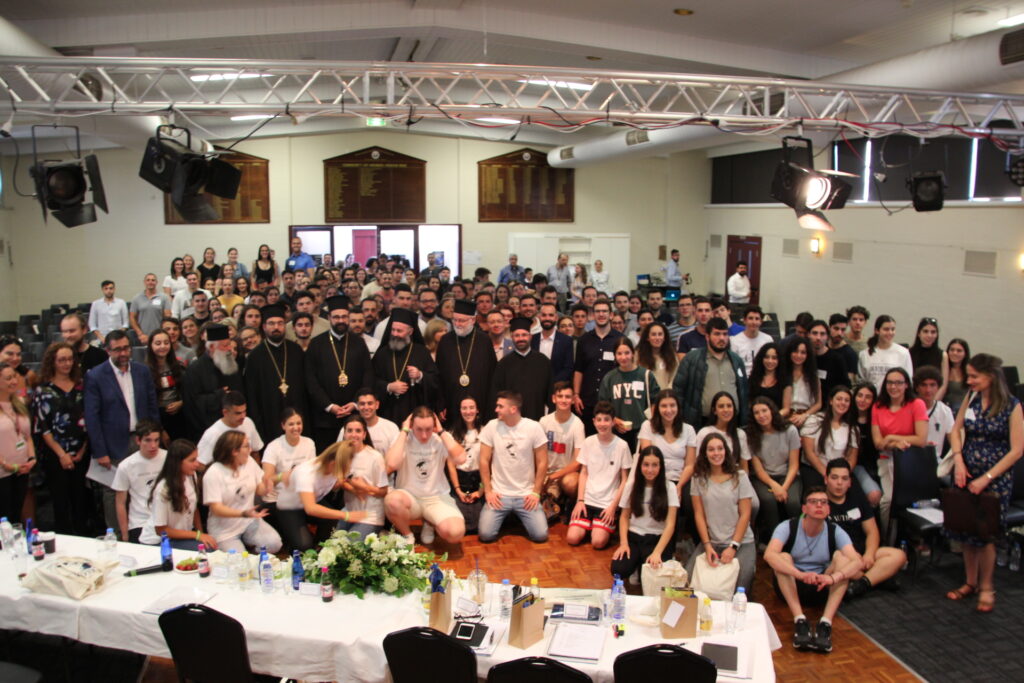 It was the end of a particularly balmy summer’s day, yet the 250 or so delegates of the Melbourne Conference showed no signs of tiredness or boredom. Throughout the day’s proceedings, and particularly during Archbishop Makarios’ addresses, they remained with their gaze transfixed upon the Archbishop’s countenance as he emphasised to them the importance of spiritual, intellectual and physical growth. Stressing individual responsibility and initiative, he highlighted the significance of choice, explaining however, that choices have consequences. Quoting Heraclitus, Archbishop Makarios opined that while everything changes, certain truths remain constant for all time. These, he posited to youthful delegates who are navigating their place in a fragmented, changing, cacophonous and of late, quite brutal world, culminate in the practice and understanding of Perfect Love, which the Orthodox Church teaches, is personified in Christ.

In his keynote address: “The Cross Stands While the World Turns,” Archbishop Makarios provided a brief synopsis of the trends that seek to destabilise humanity’s understanding of itself, such as war, environmental degradation, abuse of the body and social degradation, outlining how the salvific message of the Church can act as a stabilising force. Implied in his message to the youth, is that while there exist a multiplicity of paths open to them, for which they deserve support, nurturing and guidance as these are traversed, ultimately, their preferences are their own. The Archbishop’s injunction, was to encourage delegates to look beyond the superficial and to ponder, and where necessary, change their world perspective.

During Former President of the Victorian Association of Science teachers, Artemisia Bennett, from the parish of Saint Dimitrios Moonee Ponds, speech on Climate Change, Archbishop Makarios was heard to exclaim: ᾽Καλά τους είπε,᾽ as a recording of one of climate activist Greta Thunberg’s speeches was played, in which she castigated world leaders for their greed and inactivity. The implication was clear: Whatever anyone thinks of Thunberg’s politics or the manner in which she campaigns, she is a brave agent for policy reform, and on an issue that is of dire importance for us all, as the leader of the Church, Ecumenical Patriarch Bartholomeos has pointed out for decades in his writings on the environment. This quality, the ability to call out injustice and without fear, advocate for change, was at the centre of the Youth Conference, whose key theme was: “Change: How do we navigate ourselves in a diverse world.” 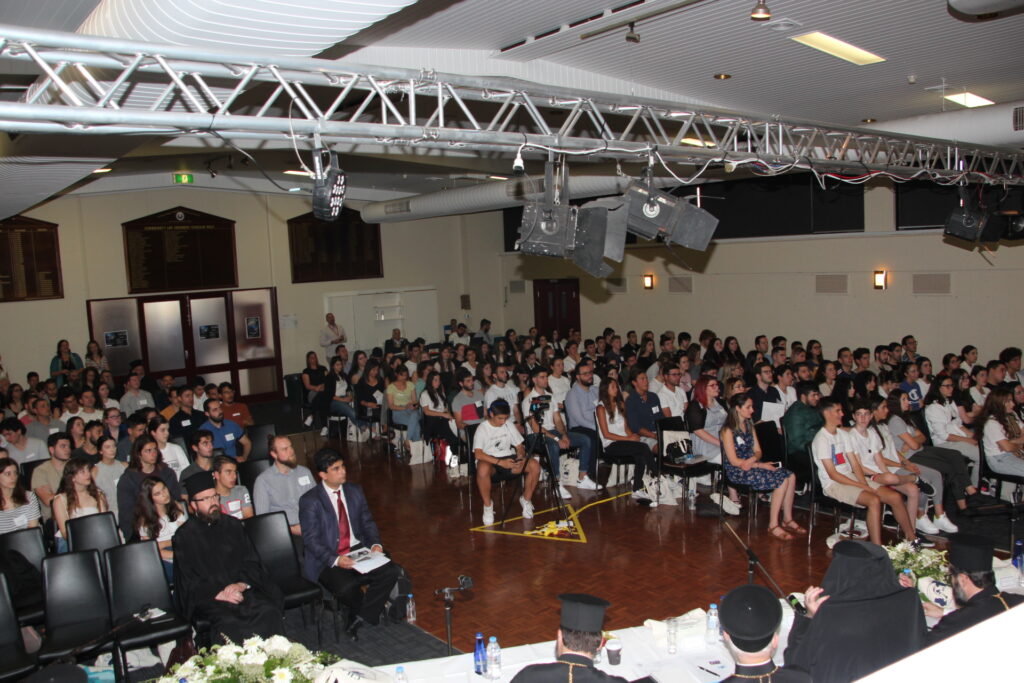 The rise of social media and its prevalence within society poses one of the great social challenges of the modern era. Expert Chris Vlahonasios provided, in his talk “iOrthodox: Navigating Social Media” a nuanced and sophisticated analysis of the dangers involved in incautious use of online social applications, ranging from abuse, grooming, and bullying, outlining legal, social and pastoral means of seeking assistance, support and protection, where needed, while also offering a comprehensive code of conduct for ethical and enriching use of the internet.

Later, seated for lunch, not removed from, but rather, in the midst of all the delegates, both Archbishop Makarios and visiting Metropolitan of Chicago Nathaniel, repeated their admiration for the doughty Thunberg. Soon after however, Archbishop Makarios cut his lunch short in order to mingle with the youth. He walked around the quadrangle of Oakleigh Grammar, surrounded by eager smiling delegates, greeting them, asking them probing questions, avoiding platitudes, engaging in conversation and most of all, listening. After all, this was the reason for the Youth Conference in the first place: to facilitate the Archbishop meeting with and understanding the needs, opinions and perspectives of younger members of the community. Conversely, the delegates milling around the Archbishop were not doing so, in order to engage in the sort of retrogressive adulatory servile culture of yesteryear. This was genuine engagement, and one got the sense that both parties were sizing each other up, and liking what they were discovering about each other. 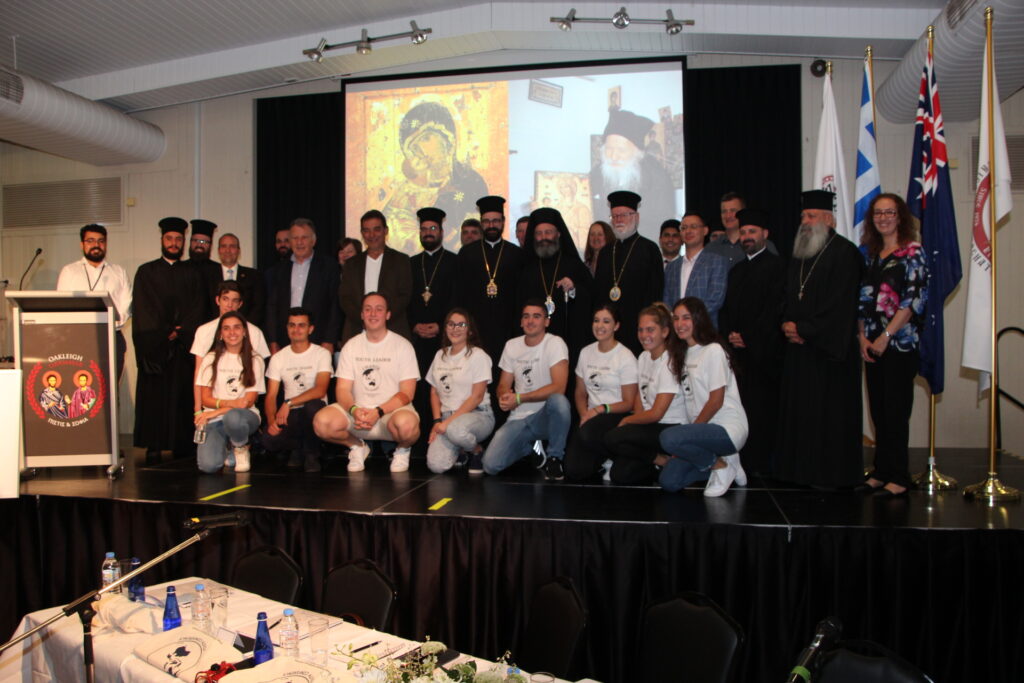 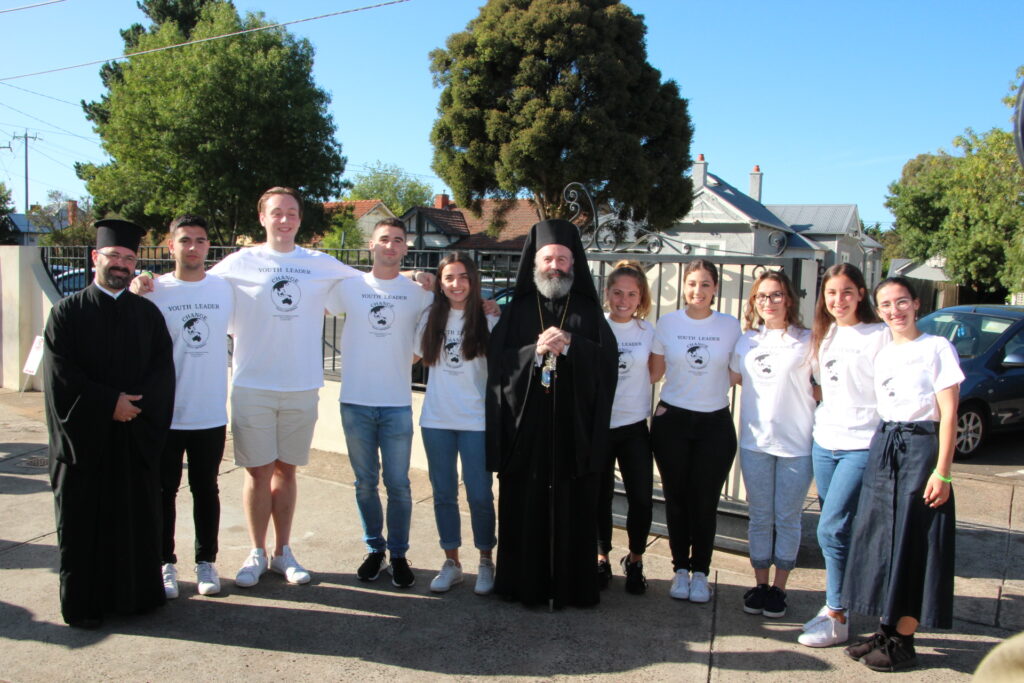 Moments later, Metropolitan Nathaniel stood up, donned an Akubra and marched off to play basketball with some of the delegates. I watched him in awe, as others engaged in another two activities, Byzantine Chant and Greek Dancing. 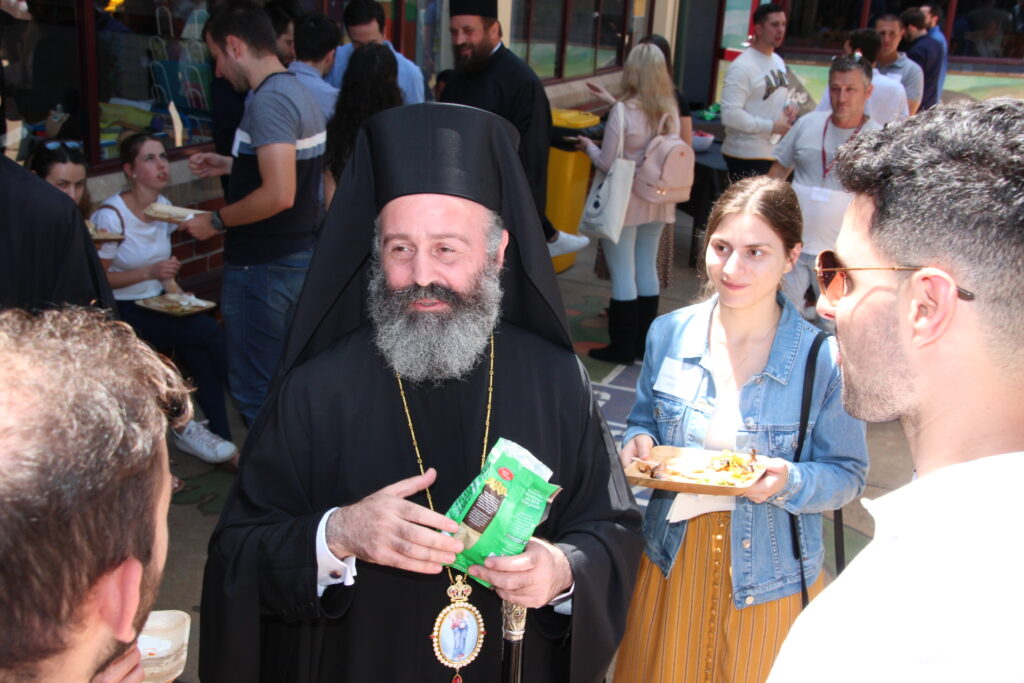 I got to speaking with a delegate from Morwell, in Gippsland. After discussing the devastation of the recent bushfires, I mentioned that I had heard him give an impressive interview to journalists moments ago in flawless Greek. “My father’s Greek is quite poor,” he informed me, “and my mother is Australian. But I love the language and have done what I can to cultivate it. Learning Greek ties me to my roots and to my Church.” When asked what the Church means to him, he replied: “It is my moral compass and a source of everlasting inspiration. More than ever before, its teachings provide me a way of navigating through this life.” 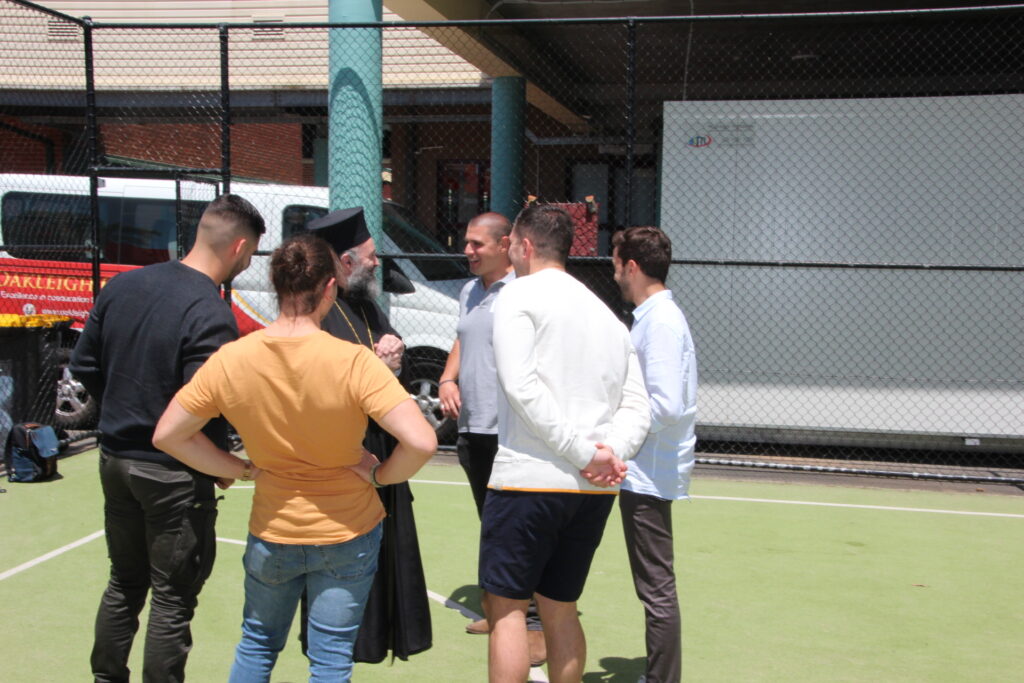 A young Classics student approached myself and Dr Mario Baghos, who had earlier given a talk about Saint Andrews’ Theological College in Sydney, asking where she could learn Byzantine Greek. Having studied ancient Greek at Melbourne University, she wanted to trace the continuity and transformation of Greek language and culture into the Byzantine period and mused that the best way of doing so, was through the Church, which according to her, preserves living elements from that era. A fascinating discussion ensued, about the use of Homeric motifs in Byzantine novels, atticisms in the writings of the Church Fathers, the relevance of the Modern Greek discourse to Edward Said’s essay on Orientalism, the manner in which the teaching of Ancient Greek is subverted to legitimise the hegemony of Western European derived cultures and lamenting the loss of Modern Greek from Victorian tertiary institutions as inverse multiculturalism.

Soon after, I was chatting with a delegate, who inspired by lawyer and cantor Vaios Anastasopoulos’ speech on the Cantor School set up by the Archdiocese, wanted to share his knowledge of Byzantine notation reform, and to consider the difficulties the cadences of the English language have in lending themselves to Byzantine musical transcription. I was entranced. 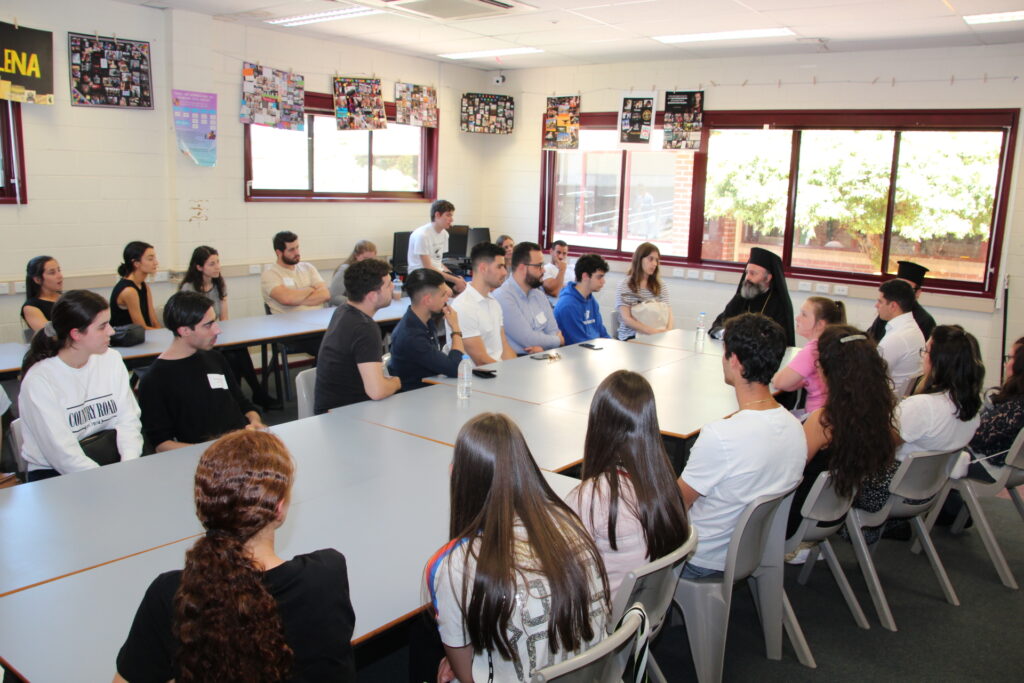 Moments later, a law graduate introduced herself, seeking to discuss ethics within the legal profession and the implications of certain career paths. I listened with admiration, realising simultaneously that these delegates exhaust the stereotype prevalent in some sections of the community of young churchgoers as socially isolated, gloomy, awkward, superstitious, narrow-minded, bigots. Instead, in their overwhelming majority, they were well-educated, articulate, suave, mentally agile and joyfully optimistic. The sense of exuberance in the packed hall of Oakleigh Grammar was palpable.

As I rose, at the conference’s close, to deliver my own address, on the Family in Orthodox Theology, I absorbed this exuberance. I reflected upon how relevant the archetype of Family is to the various communities that define our Antipodean existence. Whether we are united by common ancestry, a common language, a common narrative, common convictions or a common living space, a century after the formation of our first secular and ecclesiastical institutions, we continue to cleave to each other. All of our affiliations transcend, combine with and sometimes even contradict and come into dispute with one another, and as is in the case in all families, these coalesce to form one overarching family to which we all belong. To realise that, is to change one’s perspective on the Greek presence in Australia. 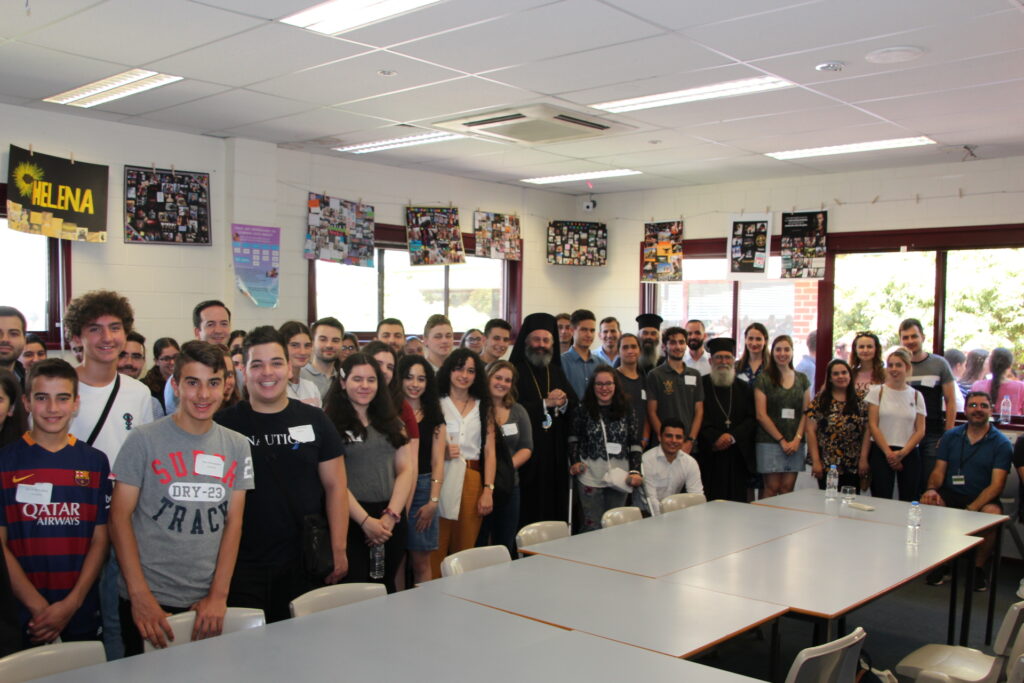 Change is not coming. It has already arrived. In a community hitherto characterised by its gerontocratic mores, more and more of its youthful members are taking it upon themselves to drive initiatives of relevance to them. The Archdiocese’s Youth Conference, organised by the youth of Melbourne themselves, is a case in point. For one thing, it positions questions of our religious heritage within the meta-narrative of contemporary Antipodean Hellenism in a way never before attempted. For the first time, youth are driving the immediacy of the Orthodox message to their local environment and society, and this is, arguably, of great historical significance. The further Youth Conferences planned this year throughout Australia will no doubt create momentum to drive this change further. As a means of encouraging intellectual and social pluralism within our discourse, adding a venerable means of critiquing the social fabric of our multifaceted society, and engaging with Church leaders in a spirit of collaboration and inclusion, leading to increased youth responsibility, such endeavours are refreshingly welcome.