Papa-Fotis, the Fool for Christ: in his Vestments in a House of Ill Repute!

One evening, Papa-Fotis visited one of the houses in town where he sometimes stayed.

Before he went to sleep, he told the man of the house: ‘First thing in the morning, you and me have got work to do’.

They got up, left Mytilini and went to his little monastery. He quickly gathered the holy vessels and his priestly vestments and went to the picturesque chapel of Our Lady Galatousa, up near the old fortifications of the town.

He served the Liturgy. Then he took the Holy Chalice and the spoon and, just as he was, in his vestments, went off to one of the brothels that were in that area at the time.

There he gave communion to a prostitute, Evlambia, who was on her death-bed and who immediately went to her rest in the Lord, that is she died. He’d heard her confession before! 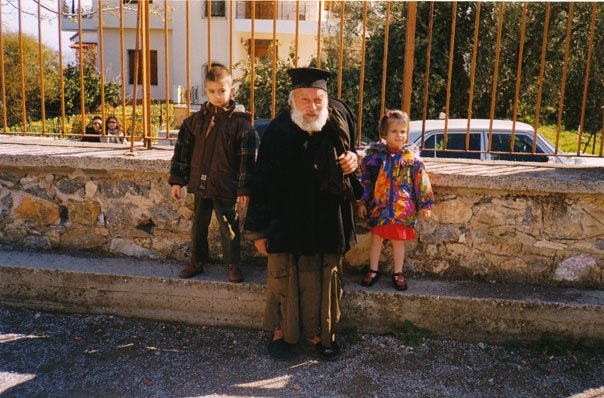 When I asked him about this later he told me: ‘This has happened lots of times. There was a woman near the church of Saint Symeon who used to tell when there was a case like this and I’d go off to these souls in the brothel. They accepted me. I talked to them about repentance and the salvation of the soul, about the next life… I never spoke badly to them, just told them, with love, to repent and that God would take care of them, would welcome them back into His heart. Many souls repented. You ask me if I was afraid. Why would I have been? I fear nobody. We fear only God, when we sin. I never cared what other people were saying, I was acting for Christ’.

There is an interview with Papa-Fotis at https://www.youtube.com/watch?v=smxGU0t624A though he speaks in a local dialect which is difficult to understand.