[In today’s well-known parable of the Pharisee and the Publican] two characteristic types of people are presented in the Gospel reading, both of them praying in the temple. They were at opposite poles of society as it was then. One was pious and righteous in the eyes of others, a scholar of the Law, a member of the party of the Pharisees who were the leading religious grouping. The other was a representative of the class of sinners, a member of a profession which was a by-word for extortion, brutality and the expropriation of other people’s property. In the mind of the whole of society at that time, a tax-collector was the lowest of sinners. 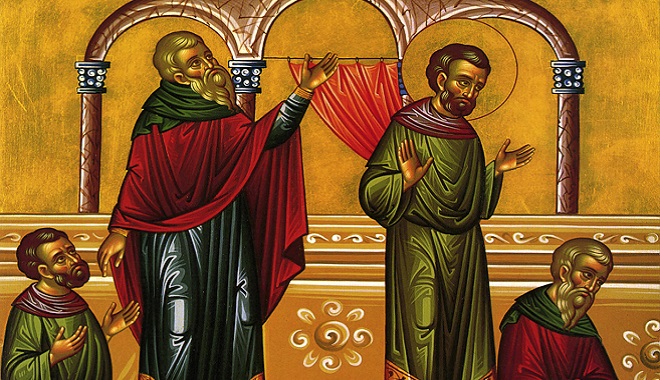 So what do these two people say in their prayer? Let’s look first at the prayer of the Pharisee, in an effort to investigate whether this kind of religiously-inclined person is familiar to us today. ‘God’, he says, ‘I thank you that I’m not like other people, rapacious, unrighteous, an adulterer or like this tax-collector here. I fast twice a week and give a tithe of all my income to the temple’. This prayer’s a hymn of praise to himself and his virtues. The Pharisee enumerated his good work and felt incomparably superior to other people, whom he thought of, for the most part, as sinners. He didn’t feel as if he lacked anything. He was complacent and seemed not to depend on God at all, because he had so many of his own good works on which to rest and about which to boast. At the center of his world he saw not God, but himself, and his generally-acclaimed virtues. He needed God only to confirm and recognize his virtues. How could God not share his own opinion about such an accomplished and virtuous person? He felt as close to God as if he’d signed an agreement with Him that both of them together would judge and condemn sinners.

Did God really agree with the confidence of the Pharisee? We’re given the answer to this at the end of the parable. But in the meantime, let’s look at the prayer of the Publican. Grievously burdened by his sins and seeing that every one of his actions and deeds were linked to sin, he was humbled, smote his breast and sought God’s mercy. ‘Lord, have mercy on me, sinner that I am’. He didn’t judge anyone, only himself, whom he saw as being totally lost without God’s mercy.

He was ‘justified’. In other words, he found grace. The end of the parable tells us that the person who returned home innocent and reconciled to God was the humble Publican, not the arrogant Pharisee. Because those who elevate themselves will be humbled and those who humble themselves will be elevated. The end of this story must have surprised many of those listening to it, because at the time everyone believed in the religious superiority of the Pharisees as against the sinful Publicans. But Jesus wanted to overturn the prevailing opinion, which saw a person’s deeds purely from an external point of view. He wanted to show that the depths of the heart, which God alone sees, are not always as they would appear in life.

Of course, it should be said at once, to avoid any misunderstanding, that Jesus doesn’t condemn the Pharisee because he’s a virtuous person who performs his religious duties, but rather for the fact the he builds his life on them instead of God. He’s complacent and is totally unaware that humility is the basis of all the virtues. Equally, Christ praises the Publican not for his sinfulness, but because he recognizes it and quite rightly submits himself to God’s judgment, seeking His mercy. This is because he awaits salvation from God, since he has nothing of his own to show.

As Saint Luke’s Gospel tells us just before the parable, it’s directed at those who are certain of their own piety and despise others. These are people who are found in all eras. They’re people who are complacent in their religiosity and accomplished in the virtues. They condemn others, consider them to have fallen into sin beyond redemption, and take delight in describing the punishments God has ordained for them, quite forgetting that they, too, are under His impartial judgment. Because such behavior involves hypocrisy, ‘Pharisaical’ has become a synonym for self-righteous hypocrisy.

By placing this passage as the reading for the beginning of the Triodio, the Church wishes to protect the faithful from the ‘lofty-minded’ thinking of the Pharisee which can burrow its way into every devout Christian. Instead it wishes to highlight the example of the Publican who prays with contrition because he’s repented over his life. The following hymn sums this up perfectly:

Let us avoid the lofty speech of the Pharisee
and let us learn the humility of the Publican in sighs,
crying to the Savior:
‘Be gracious, you who alone are benign to us’.