A unique journey through Orthodox Monasteries in Greece, from Writer, Photographer and Publisher Dimitris Sotiropoulos! Over 600 of high resolution photos of 160 Monasteries are included in this 348 page book! 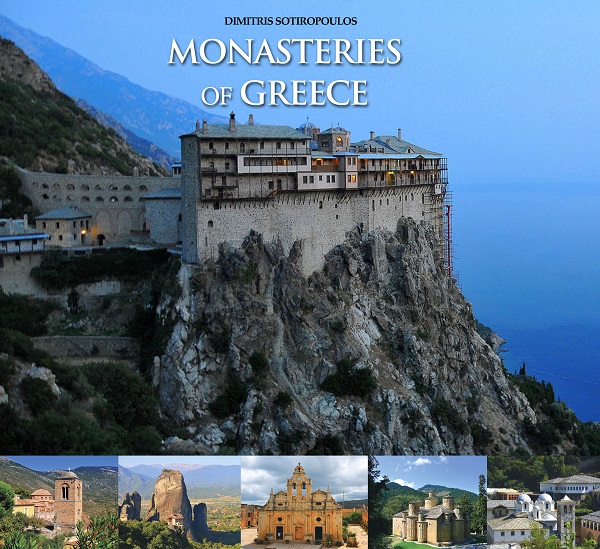 It is a great pleasure to dedicate a book in the sacred places of Greek Orthodox Christianity. It was also a great request from many people from different countries: From Europe to Americas, Asia, Africa and Oceania, a lot of Christians asked us to publish a book in English, in order to discover Greek Orthodox Monasteries.

Hundreds of high resolution pictures, from the exterior to interior of the Monasteries, are included to travel us through the history and spiritual importance of these religious monuments. Also, detailed descriptions and historical references of the Monasteries, written in a clear and simple way, give us the informations we need about them. Every chapter has, at its end, contact informations (Telephone, Address etc) of the described Monastery. There are also maps with the exact positions of the Monasteries in every prefecture, so a visitor could easily find them.

Almost 160 Monasteries are included in this book: From Mount Athos, the only untouchable monastic community of the world to the most populated area of Greece, Attica, we pass through Central Greece and Peloponnese, before travel to the famous Monasteries of Meteora. Thessaly, Epirus, Macedonia and Thrace, with very important Byzantine Monasteries, are also included. Finally, you can read about the Holy Sites of Crete and Cyclades Islands.

Dimitris Sotiropoulos was born in Athens in 1979 and lives in Piraeus. He is a Photographer, Writer and Publisher, with origins from Peloponnese and Crete. He also works as a Freelance Photographer for Getty Images, one of the world’s biggest stock photo agencies. Until now, he has published eleven books: Three about Mount Athos and the other eight for the Monasteries of Peloponnese, Central Greece, Meteora, Thessaly, Epirus, Macedonia & Thrace, Crete and Cyclades. All those books are unique for their quality and educational value. “Monasteries of Greece”, is the 12th book of Dimitris Sotiropoulos Publications and the first one in the English language.