After those who entered the ancient Church had been baptized, the whole of their life was imbued with the sacred desire for Holy Communion. The places of worship, especially the catacombs, were full of allegorical symbols of the heavenly nourishment of the faithful. Images of the true vine, of the thirsting hart racing ‘to the springs of waters’. In the crypt of Saint Lucina [in the catacombs of Callixtus in Rome], there is a depiction of fish and a basket of loaves for Holy Communion*. ‘Love, pour me wine’ reads one inscription (in Latin). In the Greek chapel of the catacomb of Priscilla, a wall-painting from the 2nd century represents the fractio panis, the breaking of the bread. The priest breaks the bread. In front of him is a chalice and nearby a group of six people are seated at a table on which are loaves and fish. Elsewhere we see the holy gifts on a tripod being blessed by a priest while a woman stands at his side, praying. Another image depicts the Good Shepherd with a vessel, recalling the vision of Saint Perpetua. A chalice, most probably from the Divine Eucharist, was also found in the catacombs, inscribed with the words ‘Drink and you will dwell among the good things’ (in Greek).

The desire for the sacrament was depicted everywhere in secret symbols, in order to conceal the true meaning from pagans. In another wonderful inscription from the 2nd century, from Asia Minor, we read about the ‘prodigious, speckless [secret fish], caught by the Virgin and given by her to friends to eat for ever, with good wine and bread as refreshment’. The heavenly fish, to whom the Virgin gave birth, was offered by the ancient Church to be eaten in perpetuity by the ‘friends’, as the early Christians were often called. 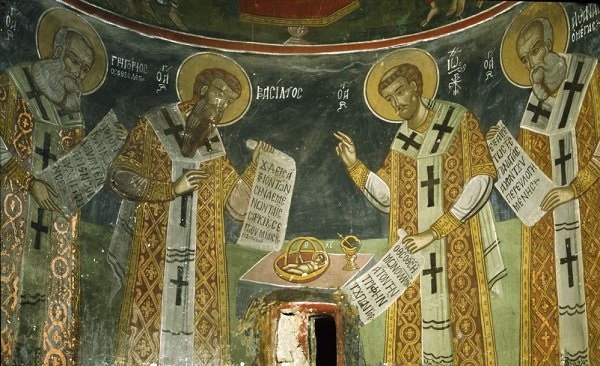 The passion for frequent Holy Communion was a living reality. The great hymnographer of the sacrament, Saint Ignatios, recommended to the Ephesians that they should be sure to come together frequently to God’s Eucharist, and this can be seen in the life of the ancient Christians. They took communion not only on Sundays, but on weekdays as well. Every time that the priest came out from the Royal Doors with the precious gifts, and invited the faithful to come forward ‘with fear of God, faith and love’, the whole of the thirsting crowd would approach the spring of life. They approached in a particular order, as defined by the ancient liturgies: after the bishop, the priests and deacons, then the readers, singers and monks, then the deaconesses, nuns and widows, the children, as being purer, and finally, ‘all the people’, as the ancient text puts it.

As they came to the chalice of life, they quietly sang the communion hymn, Psalm 33: ‘I shall bless the Lord at all times, his praise shall ever be in my mouth’. And then there was the sweet invitation: ‘Taste and see that the Lord is good’ and other psalms. Tears flowed from the eyes of the faithful, tears of joy and elation. Now they were tasting that the Lord is good. They were taking provisions in order to continue their struggle.

In his first Apology [i.e. Defense] Justin [Martyr], tells how the Divine Liturgy was celebrated: ‘And it was sent with the deacons to those who weren’t present’. Those who weren’t present with good reason such as sickness, weren’t forgotten. But most in need of the ‘medicine of immortality’ were those who were imprisoned for the faith, those who were about to face martyrdom. How inexpressible their joy must have been when, in prison, they received the divine Bridegroom. And those heroic deacons who took the precious gifts to the prisons are also deserving of our attention. One such, a young man called Tarsicius, fell victim to the barbaric Romans and breathed his last on the Appian Way because he refused to hand over his precious treasure.

Tarsicius symbolizes the whole of ancient Christianity. He lived, functioned, strove and created a culture in the catacombs thanks to the priceless provision of Holy Communion. This was his life and his invincible power: the daily Easter of his mystical exultation. The center and foundation of his life in Christ. Through this he was buried with Christ and rose with Him, triumphantly, in an indissoluble union.

‘We cannot live without the celebration of the divine supper. You can’t be a Christian without the Divine Eucharist’. This majestic declaration of the martyrs of Carthage before Consul Antoninus (11 February 304) is the unanimous voice of the whole of Christianity in the first centuries.

* For further information on this subject, readers might be interested in Christian Epigraphy; an Elementary Treatise with a Collection of Ancient Christian Inscriptions Mainly of Roman Origin, by Orazio Marucchi, which can be read on line [W.J.L].