With her desire for God and fervent faith, Mary was completely transformed. She turned her back on the unnatural, which is the state of sin, to the natural, which is purity and cleanliness and then proceeded to the next stage- beyond nature- which is sanctification and the vision of God.

Because it’s only in this way, through the fact that she was granted the vision of God, that she saw the uncreated light of Christ, that she was inundated and shone entirely in the uncreated light, that she was warmed, illumined, nourished spiritually and enriched in the experience of this divine and uncreated light, that we can explain how she managed to experience, for forty-seven years, all alone in the pitiless Jordan desert, the agony of Gethsemane, the furnace of the Cross and the mortification of the flesh. God, Who accepts the repentance of sinners, enabled her to experience events which only the Apostles Peter, James and John, as well as the great Moses and the Prophet Elijah, would really be able to understand. 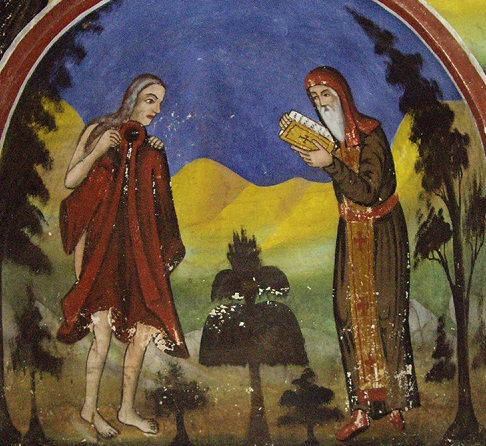 And so, in the end, the devil was defeated. The woman who had once been his apprentice, his loyal servant, was freed from the bonds of sin through the power of Christ and she utterly routed the serpent, triumphantly put the blood-stained murderer to shame, ridiculed his ploys, and undid his plots, to the glory of God and the inspiration of us in our daily struggle. For now there’s no room for despair; rather, on the contrary, we have in her holy person a most excellent teacher of the spiritual struggle and the best possible example of repentance and pleasing service to God. Mary is now an Amma, that is, a spiritual mother, for all of those who wish to gain their salvation.

Towards the end of her life, during Lent, by God’s dispensation, it happened that an outstanding and holy ascetic, Abba Zosimas, “the greatest of the fathers and wise” came to the place where the daughter of repentance had laboured so long in asceticism. As was the custom at that time, he went far out into the desert during Lent in order to find greater stillness, in accordance with the instructions of Saint Efthymios the Great. Mary addressed Zosimas by name! This holy man (whose memory we celebrate, by the way, on April 4) immediately realized that before him stood a sanctified vessel of exceptional grace from God; a God-bearing soul, who had acquired significant spiritual gifts and was close to perfection.

He asked for her blessing and for a few words for the benefit of his soul and his salvation. She, on the other hand, insisted on receiving his priestly blessing, since she knew from her spiritual foresight that he was a priest, even though he wasn’t wearing anything to indicate this. She made a general confession to him concerning her life and works, with floods of tears. She also asked that that they meet the next year on the banks of the River Jordan and that he bring the Holy Sacraments so that she could make her communion. And, indeed, Zosimas appeared the next year at the Jordan with Holy Communion.

Mary was on the other side, but made the sign of the Cross and walked across, on the water, as if it were dry land, just as Christ had once walked on the waves. In this wondrous manner she crossed the river and came to Zosimas. She partook of the Body and Blood of the Lord, “for the remission of sins and life everlasting” and then spoke the words of Saint Symeon, when he received Christ in the Temple: “Now, Lord, you let your servant depart in peace, in accordance with your word, for my eyes have seen your salvation…” She left the monk priest and requested him to return the next year. When he did, he saw and experienced astonishing things. He found the relics of the saint, who, in the meantime had fallen asleep in the Lord, properly laid out with her arms folded cross-wise over her chest and her face turned towards the east.

Next to her, written in the sand, were the words: “Father Zosimas, bury here the body of lowly Mary. Give the earth what belongs to it, after you’ve prayed for me. I died on 1 April, the same day as the Passion of Our Lord and Saviour Jesus Christ, after you gave me the Spotless Sacraments”. For a whole year, the precious relics of this great saint had not decayed, to the glory of God and the encouragement of Father Zosimas and us. The priest was wondering how he was going to accomplish this, since he had no digging tools with him and he’d have to walk three weeks to the monastery and back to get them, when a lion appeared. It licked the soles of the saint’s feet and scooped out a hole, into which Abba Zosimas laid her.

The lion then undertook the task of covering her with earth. Rationalists will no doubt say: “But do things like this really happen? Isn’t that a bit over the top, too much of a tall story?” We would reply: the principle always applies that where God so wills, the order of nature is overcome. In our Faith, there’s room for miracles. Believers aren’t surprised, because they live constantly in the realm of miracles. They accept miracles and rejoice in them, encouraged by any exceptional intervention of Grace. They glorify God Who has intervened in this miraculous way. Be that as it may, in this particular case there is something else that we should look at: through her profound repentance, her great love for God and her generous struggle, Mary had reached the prelapsarian state, when all creatures were friendly towards Adam and Eve; because then our sin wasn’t in the way, since it was this that made the animals wild and hostile towards us. It was sin that left the whole of creation in pain, groaning with those who broke God’s commands.

This, in brief, is the picture of a person who, having once been in drudgery to sin, went on to please God through her perfect and exemplary repentance. She was then rewarded richly, in accordance with the saying “Where sin abounded, grace was given even more abundantly”. Since we’re all sinners, in word, in deed and in thought, every day, either in an obvious manner or potentially, sometimes wittingly, at others unwittingly, and thus run the risk of finding ourselves eternally and horrifically separated from our sweet Lord; and since “sloth is dire but repentance great”, it would be well for us to imitate Saint Mary, as far as we’re able, and bow down to the ground before Our Lord Jesus Christ and to plead with Him, through the prayers and intercessions of the formerly debauched but now all-virtuous Mary the Egyptian, so that we may make a start with our repentance, for our soul’s salvation.

Bishop Iosif A. Harkiolakis, Metropolitan of Prikinisos, Κεράμιον Ύδατος, published by the Transfiguration of the Lord, Milesi 2014, pp. 183-95.
POPULAR
Photo Gallery
Memorial Service for the Constructor of the Holy Monastery of Pantokrator 31 October 2019