The fifth Sunday of Lent is dedicated to Saint Mary the Egyptian. This Mary is a unique and eternal example of repentance and of rehabilitation and perfection in Christ. As we enter the final straight towards the Spotless Passion, and the Life-Bearing Resurrection of Our Lord, the need for proper preparation through repentance, so that we can experience in a redemptive manner the Cross and Resurrection, becomes ever more urgent and imperative. This is why, on this Sunday, the Church highlights the figure and example of Saint Mary, in order to provide the help we need. 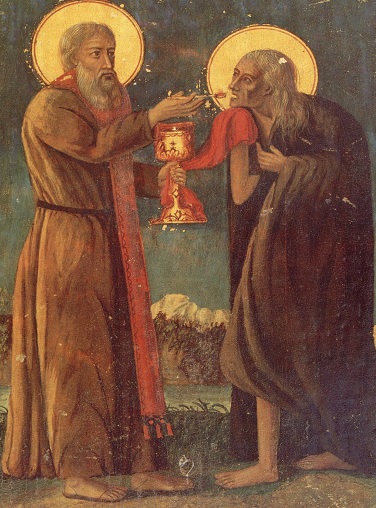 So who was this Mary that the Orthodox Church has found to be of such great importance that we celebrate her memory twice, on the anniversary of her repose (1 April) and also on the 5th Sunday in Lent? She was an Egyptian. Christian, of course, as regards baptism, faith (in theory) and name, but a long way from being a real Christian as regards her morals and actions. From when she was a mere slip of a girl, at the age of twelve, she had been trapped in the coils of depravity of the flesh, a pathetic victim of the repulsive demon of lust. She wasn’t brought to this because of some sort of wretched poverty or penury, as was the case with others in her miserable condition, but merely out of rampant debauchery and the unquenchable desire for sin. She was a veritable slave to her passion. On one occasion, this passion led her to board a ship sailing out of Alexandria, bound for the Holy Land. The ship was full of young men going on a pilgrimage to the Holy Sepulchre and other sacred sites associated with the Lord and His mother. She wasn’t travelling as a pilgrim, though. That wasn’t her purpose at all. She’d simply seen all these young men and had her appetite whetted to lie with them. The wretched woman became a diabolical lime-rod, a snare, and caught a great many of these young men, whom she robbed of their sense of decency at the very time when they were on their way to receive the blessings of a pilgrimage.  And so, because of her, the voyage which was meant to be a quest for holiness, was transformed into a shameful trip on the putrid and stinking billows of lewdness. There was great mourning in the heavens and loud lamentation among the angels at the fall of so many.

Eventually, the ship arrived at its destination and the passengers disembarked and went on up to Jerusalem. But oh, Your wondrous ways, Christ, and Your ineffable love for humankind, which cannot bear the death of sinners and finds a multitude of means to bring about their salvation! When Mary went with the others to enter the holy church of the Resurrection, where the feast of the Elevation of the Precious and Life-Giving Cross was being celebrated, an invisible force which was not apparent to anyone else, prevented her from going to reverence the “Tree of Life” as she wished to do. She tried again and again- so many times- but in vain. Then she realized that the reason was her sinful behaviour and debased view of life. She was wounded to the quick, deep in her heart, by the arrows of remorse and compunction. She became aware of her condition and began to lament and beg the Lord for mercy. She turned her gaze to the icon of the Mother of God which was in the church and fervently called upon her maternal assistance and support, vowing and promising to change her way of life immediately, and to please the Lord by repentance and a godly life. And the sweet Virgin, the hope and protection and salvation of all who flee to her in faith, attended to the cry of supplication, which was addressed to her. And so Mary was at last able to entered the church unimpeded and, along with the other people, to reverence the Precious Cross. She then went and reverenced the icon of the Mother of God and told her that she would entrust herself entirely to her and be guided by her as to how to live a life of repentance. Then a voice came from the holy icon, saying: “If you go beyond the Jordan, there you’ll find rest”. According to tradition, this very icon is now on the Holy Mountain, in the cave of Saint Athanasios, near the Monastery of the Great Lavra.

Mary obeyed the advice of Our Most Pure Lady and, on winged feet, abandoned the world and the things in it, including the empty and soul-slaying fleshly pleasures and enjoyments and made her way to the sacred River Jordan. She washed in the waters and proceeded from there to the church of Saint John the Baptist, where she made her confession, according to Saint John Chrysostom, who described her as casting her former miserable life of sin into the furnace of confession. She declared, with pain and remorse in her heart, as well as floods of tears, the repulsive life she’d led, received absolution and made her communion. And since, again according to Saint John Chrysostom, “the power of confession is great and mighty is its force”, while” the power and saving energy of the sacraments are also certainly of the highest order when we partake of them in repentance and confession”, Mary was greatly fortified by both confession and communion.