And Peter said to him, ‘Aeneas, Jesus Christ heals you; get up and make your pallet.’ And immediately he rose. And all the residents of Lydda and Sharon saw him, and they turned to the Lord.

Why do people seek miracles in their lives in order to believe? Is it only the effect of our reason that makes us doubt what we all fundamentally know to be true, that is, the presence of God? Is it the pressure caused by our surroundings, especially people we trust and who influence us; or a feeling that we have to live the experience of proof ourselves and that it’s not enough to know the experience of others who have lived the miracle of faith throughout the centuries, either from being with Christ from the beginning or through His successors?

In the period of the Resurrection, we read excerpts from the book of the Acts of the Apostles. In one of these extracts, Saint Peter raises two people: one from his enforced eight year paralysis, which made his pallet into a kind of grave; and the other a woman who had done many good works among the Christians in Joppa and who had died of a sudden illness. One resurrection was from an ailment, the other from death. In both cases, those who witnessed the miracle responded to them and accepted Christ as their Lord. In other words, they believed. It wasn’t just the scale of the miracle. It was the fact that the person who performed it did so not through his own power but through his faith in Christ. They didn’t believe in Peter, but in Christ, through Peter. They felt the experience- the miracle that had occurred to their neighbors- touch them and theirs. But they realized that the truth was not confined to the experience but included the person who was revealed by it: Jesus Christ as God. Both miracles increased the number of people who became part of the Church community. The miracles weren’t the actions of a someone performing marvels for the sake of his or her personal glory. They were those of a man with direct experience of God, who transmitted it through his words and through his miracles.

In essence, then, there are three miracles recorded: health, life and communion. Our health is precious to us. If it’s badly affected, this is a great trial. Health and also sickness do have within them some hope, however, which is that of sustainability or of change. That health will be maintained or restored, either through medical science, the body’s own resources or a miracle. People who are ill retain within themselves the hope that they may become well again. Death, though, involves the loss of any kind of hope. Both the deceased and their families are entirely powerless in the face of death and cease to have any hope, since death is an event from which there’s no return. 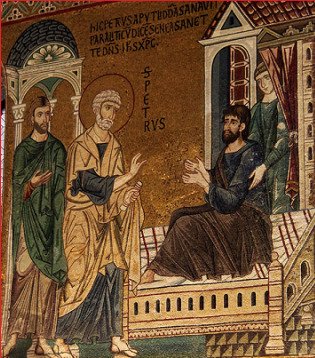 In the two miracles Peter performed in the name of Christ, he restored hope as a gift from God. He brought Aeneas back to health, fulfilling the man’s dreams, even though this seemed not to be feasible. He told him to get up and sort out his pallet. In essence, to pull himself together, because he now had hope that God exists and hadn’t forgotten him. And not just at that moment. At every trial in his life thereafter, he would feel God present. Peter gave life to Tabitha and to those who loved her the joy and hope that she would regain her place in their lives. Because the raising of Tabitha is a sign that, in the end, death doesn’t have dominion over our lives. Faith defeats it, either through the resurrection of a miracle or through the resurrection of the dead.

The third miracle is communion among people, which is experienced in the Church. Both Aeneas and Tabitha were members of the local Church and the miracles were experienced by all the other members thereof. The Church is the body of Christ, it’s the community of those who hope and also of those who believe. They believe in Christ as the victor over death, Who will give us what’s missing in this present life, in our daily routine, whether this be health, progress, or the strength to withstand our trials. We believe that Christ and those who follow Him have the last word, even as regards the final enemy of our existence, death.

The Church isn’t a body of theorists. It’s a body that hopes, believes and communes. All three miracles have to do with Christ. People who don’t experience these signs don’t understand the grace we receive in our hearts as members of the body of Christ This body creates a different way of viewing human relationships. It’s not life, routine, or the goals and dreams of this world that bring us close together. It’s the presence of Christ in our hearts. Unless they have the faith which becomes a relationship with Christ, those who talk about the sacraments or the way in which the Church acts can’t understand why we wish to be in good spiritual health first and foremost, because we hope in Christ, because we commune with one another and with Christ Our faith invites us to ‘Come and see’, especially during this time of the year. And the experience brings us rest and comfort when our ego stops being demanding, and instead becomes accepting, surrendering to the miracle that is Christ. When Christ is our hope. When we’re determined to pull ourselves together. When we feel that we’re missing Christ and we seek him with might and main.

The icons accompanying this text are of interest in themselves. They belong to the Cappella Palatina, the royal chapel of the Norman palace in Palermo, Sicily. The chapel is actually dedicated to Saint Peter. The inscriptions are in Latin, but the style is unmistakably Byzantine, though the mosaics lack the depth and finesse of true Byzantine art. They date from a little over fifty years before the Schism. Among the saints depicted in the chapel are Gregory of Nyssa, Gregory the Theologian, Basil the Great, John Chrysostom and Nicholas. [WJL].