The True Worshippers of God

‘They will worship the Father in spirit and truth’
There was conflict between the Jews and Samaritans. They weren’t related peoples. Samaria was a region totally foreign to the way of life of Israel. The Samaritans took their name from Mount Shomoren. They believed that the true God was a local deity and they also believed in idols. The Israelites viewed the Samaritans with repulsion, and the Rabbis ordained that Jews were to have no dealings at all with the inhabitants of Samaria.

Christ stopped to rest in this region, specifically in the town of Sychar, close to Jacob’s well. It was there that He had a dialogue with a Samaritan woman. 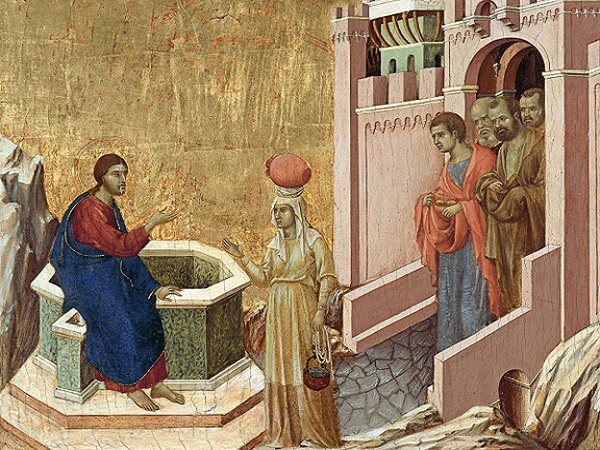 The dialogue between Christ and the Samaritan woman
From her questions and the surprise she showed at Christ’s words, it seems that the Samaritan was a simple woman, illiterate and uneducated. Nor did she have a good life-style. But, as Saint Cyril of Alexandria says, despite this she was a person who wanted to learn the most perfect knowledge of God. Among other things, Saint Cyril touches on the worship of God. Of course, he pointed out that the Samaritan way of worshipping God was erroneous and that of the Jews was correct. The Jews and Samaritans all felt that they were pleasing God with their incense, their sacrifices, their circumcisions, the Temple, Mount Gerizim, their bodily purifications and so on. Then along comes the Lord and tells them that God is Spirit, that is immaterial, and that people should worship Him spiritually. God isn’t served with material things which is why worship of His Person must conform to this. All the purifications and circumcisions are adumbrations, whereas the truth is spiritual worship. Efthymios Zigavinos writes that spiritual worship is humility. Someone else might say that true worship is soundness of dogma and the achievements of virtue.

Where is God to be found?
Where is God and where should we worship Him? God is everywhere, including within us. God is Spirit, and the Spirit ‘blows where it will’ (Jn 3, 8). The whole world is buoyed up by the energies of God. As we know, the Spirit of God ‘moved upon the water’ (Gen. 1, 2) and the deep. God is ‘everywhere present and fills all things’. Theofanis Keramevs notes that the words of Christ to the Samaritan woman about the true worship of God mean that the time will come when real worshippers will offer their devotions to the ever-present God not in some specially-appointed place but everywhere and in all parts of the world. They will worship God through the two defining features of the human race, which are action and contemplation.

The Samaritan woman as a reprimand to the idle
If a Samaritan woman showed such eagerness, such concern and such willingness in order to learn something useful about her spiritual life, and stayed with Christ even though she didn’t know who He was, where does that leave us? We know who Jesus is, where He’s to be found, where He’s offering Himself and so on. We should leave no stone unturned in seeking Him. Yet we don’t know even the basic elements about our spiritual life. Many of us don’t know what God we worship; what the Church is; how we’ll be saved; what the characteristics of repentance are and so on. Although this woman was a sinner, she really wanted to learn about the true worship of God. Do we have the same interest in learning the teaching of the Church and the Gospel?

My friends,
If we wanted to learn something, we’d know that true worship is spiritual. ‘You have honoured God more than merely by custom’, writes Saint Gregory the Theologian. It’s not pious customs that save us, but heart-felt, fully cognizant, spiritual worship of God.