When I was illustrating the book I felt awe, as if I were holding holy relics (2)

The whole of the life and works of Saint Porfyrios were a special oasis of spiritual coolness and refreshment for those people who met him. The same is true now, as well, for those who have become acquainted with him through the books which present his words, his world and his teaching. In short, the saint transmits a unique spiritual cordiality and grace while also teaching the way to acquire these. I wonder, then, whether this affected you in telling the story of the saint’s childhood adventure through your art? 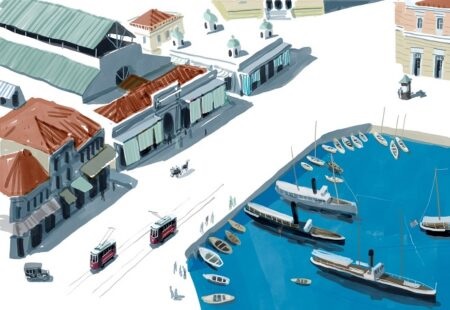 View of the port of Piraeus as it was back then

At one point I’d gone to the Holy Mountain and I showed the book in its pre-publication form to Fr. Vasileios (Gontikakis), the former Abbot of the Holy Monastery of Iviron. I actually owe the last illustration in the book to him, because he thought of it and urged me to use it. In this divine way, breath was given to the whole of the rest of the book. He urged me to show Saint Porfyrios at an advanced age, but with the child-like smile, full of innocence and sanctity, which distinguished him throughout the whole course of his life.

I’m charmed by the atmosphere of total innocence, absolute trust in God, which results in profound inner peace, certainty and security. In any case, I think this is all we’re really looking for, wherever we search for it: in Christ, riches, glory, or the need for la dolce vita.

Regarding the artistic approach, what was it that you wanted to achieve? Style, colors..

I wanted a tangible relationship with the reality that young Vangelis experienced. As I read his autobiographical narrative and his descriptions, I formed images in my mind. It became a kind of necessity, that is to see precisely what the places he described were like. You see, the places the saint described  were very close to us in terms of time. Lots of the buildings he visited are still standing. So I tried to set the scene inside myself, initially as faithfully as possible, regarding what happened in this particular story. But in order to bring it out to others and to escape my imaginings, I had to visualize it. Then I got involved with the process of the illustrations.

As the means, I chose the computer. I wanted to describe the images in contemporary artistic language, because I’d be addressing readers in the 21st century. In the summer of 2018, I started work on the narrative in the form of a comic. But after three months, I stopped. There were too many gaps in the unfolding of the events. I kept stumbling over details or points in the plots for which there was no access in the sources.

In the summer of 2019, when I’d finished my dissertation at the School of Fine Arts, I went back to it. In the spring of that year I’d worked on the illustration of a particularly demanding adventure story, which involved a true event in World War II.  I did on the spot research into clothing, landscapes and armaments of the time, which finally led to it being presented as a picture book.

That’s when something clicked inside me. I already had the above experience and a good amount of material I’d put together the previous summer and from this came a picture book about Saint Porfyrios, which, I think, is directed towards all ages. It’s richly illustrated so that, on the one hand, it’ll attract children, but, on the other, it contains meticulous depictions of the reality of those times, so it’s also addressed to adults. Besides, the text is lifted straight from the book Life and Discourses. It’s a lively text, directed towards all ages.

Did you experience anything particularly unusual  while you were preparing and working on the book? Some special favor…

Naturally, I experienced certain things which directed the course of the book and of my life, as I told you above. There was also periods of silence, though, as well as others which were more personal. In brief, in the course of my work on this book, at every turn something would come along and quietly determine the direction. 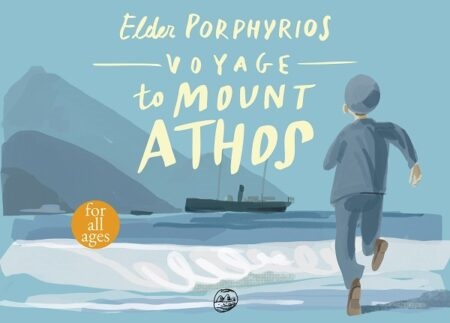 The cover of the English edition of the book

How would you compare this story, which has to do with a real event, to others involving rampant imagination, such as Harry Potter, for example, or others with shocking episodes involving children or even those of heroism and gallantry?

All books have their own value. Once when I was reading a funny comic on a typically hot Greek summer afternoon, I was stretched out reading and my father looked in on me from the door to my room. He told me that books are spiritual nourishment and that reading that sort of material was like drinking a cool orange-juice. But the spirit and the soul are also in need of the hearty meal offered by a book by, say, Papadiamantis or Dostoyevsky or… Certainly the nutritional value is very different.

So I think that reading books such as the adventure described in Elder Porphyrios. Voyage to Mount Athos slakes our thirst and refreshes us, in the same way as does a sip of holy water, which simultaneously heals and fortifies body and soul.