Who are the Archons of the Ecumenical Patriarchate?

We are pleased to announce our next myOCN Community Online Gathering this coming Thursday, May 21, at 7:00 pm EST with special guest Dr. Anthony J. Limberakis as we discuss who the Archons are and their crucial role in combating Christian persecution worldwide.

Fr. Christopher Metropulos, our Executive Director, will be offering a “Let’s Talk Live” 1 hour interactive video session on Zoom with limited availability for two-way discussion. We will also be live-streamed on our Facebook page. Join us and thousands online for prayers and discussion. Families are welcome, and you will have the opportunity to ask questions. If you would like to attend, please register HERE to receive sign-in instructions. This program is generously brought to you by the James and Joanne Mitchell Foundation. 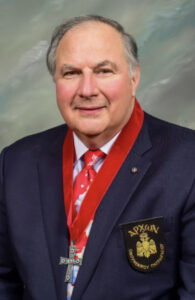 Dr. Limberakis, an Archon of the Ecumenical Patriarchate since 1987 and a member of the Archon National Council since 1988, is a practicing radiologist in Philadelphia, Pennsylvania. A former page in the United States Senate while in high school, he earned B.A. and M.A. degrees in political science from the University of Pennsylvania in 1975. AS 1978 graduate of the Duke University School of Medicine, he is president and owner of Bustleton Radiology Associates, Ltd. He is married to Dr. Maria A. (Borden) Limberakis, a family practitioner, and together they have three children and two grandchildren.

In June 2009, His Beatitude Patriarch Theophilos of Jerusalem named him the Commander Cross-bearer (Stavrophoros) of the Order of the All-Holy Sepulcher Cross-bearers. In November 2009, Ecumenical Patriarch Bartholomew and former Archbishop of America, Archbishop Demetrios presented him with the Athenagoras Human Rights Award, the highest distinction of the Greek Orthodox Church of America.