The Grace of Being a Christian

The feast of All Saints is the natural successor to that of Pentecost. This is because last Sunday we saw the breath of the Spirit, while today we see the fruits of the Spirit. The Church wishes to honor all its saints as a whole, who, like a cloud, surround the holy throne of God and show the heights to which we can rise if we willingly consent to the God’s invitation to allow Him to become our Father and for us to become His children by grace. So the Church doesn’t merely recall the descent of the All-Holy Spirit but also experiences and records what this means for our life, for the presence of the Comforter on earth, how He can act in us and how far beyond human understanding it is to contemplate the majesty with which we can be adorned by His sanctity.

Wonderful though all this may seem, the Church is fully aware that the path to achieving this is very harsh, because of the tactics of the devil, who hates us. It knows that the warfare against the evil one is dire, exceedingly subtle and devious, because the prize in this fight is each and every one of us, as a unique and inimitable personality. This bitter struggle is highlighted in today’s Gospel reading, which focuses on the choices we each have to make. 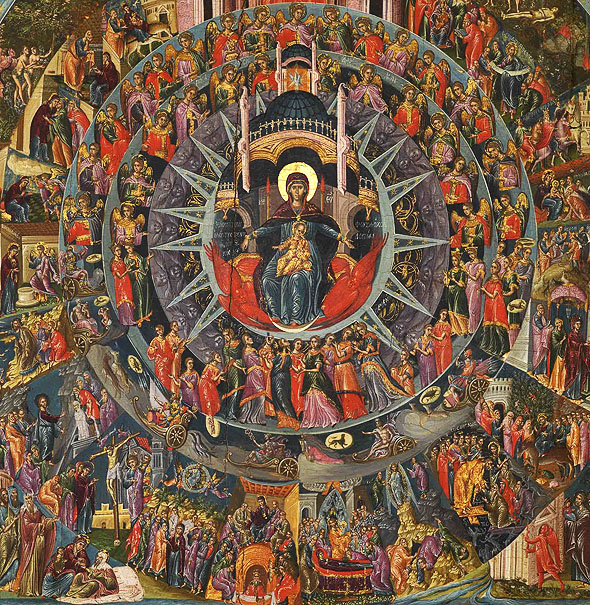 It’s worth noting the way the phrase at Matthew 10, 32 is couched: ‘Everyone, therefore, who shall confess in me before other people, I also will confess in them before my Father who is in the heavens’. That this is not a mistake is demonstrated by the continuation which states: ‘But everyone who denies me before other people, I will also deny…’. Why is there this difference in the way the phrase is formulated?

The answer is of the utmost importance for an understanding of the way in which Christ sees His people. According to the interpretation of Saint John Chrysostom, it demonstrates that: ‘those who confess the faith do not do so through their own powers (here he means the personal beliefs, the convictions, the fanaticism or the enthusiasms of each of us), but that they’re assisted and inspired by divine grace. Whereas, regarding those who deny, He doesn’t say ‘in me’, but simply ‘me’, in order to show the starkness of their soul and their estrangement for the grace of God. It is this which leads to denial. So the confession of faith is proof of a soul which has grace, in which Christ resides and which He defines, whereas, on the other hand, denial is a consequence of the devastation of the soul, because of its abandonment by God, the reason for this being our human attachment to anything that may prove to be an impediment to a real relationship of love with Him.

In other words, the Gospel describes that supreme spiritual state defined by Saint Paul when he confesses: ‘I no longer live, but Christ lives in me’ ( Gal. 2, 20). This state is described by Saint John Chrysostom through a telling example which demonstrates that Christ does, indeed, abide in people, but doesn’t take us over, doesn’t subjugate us, doesn’t rid us of our self. Saint John says: ‘Take a piece of iron and put it in the fire. After a while it’ll glow. Has it stopped being iron? No. But now it’s also fire’. This is how we work together with God, this is how we unify, co-exist, to the point where we can’t be separated.

What’s the result of this relationship between God and people? What else but that He should seek to place Himself at the very center of our lives. This is why the next part of today’s Gospel reading may seem harsh and unrelenting in human terms, although, in essence, it’s simply honorable, truthful and quite clear: God seeks absolute priority in the hearts of His people; He wants to be at the top of their scale of values.

Christ says ‘be fond of’ (‘care for’) rather than ‘love’, in order to show the profound affection, the total commitment and the worried concern that you find in family relationships, which make them different from the other relationships of respect that are cultivated in human society. Christ requires that His people should be even more committed to Him than we are to our family members, and that we should place our relationship with God at the center of our existence, as the quintessence of our experience of life.

It’s this that makes Christ different from and far superior to ordinary teachers. Aristotle once said: ‘I’m fond of Plato, but I care more about truth’, in order to show that he would sacrifice the love in a friendship for the sake of truth. Christ doesn’t tell us to sacrifice the love in our family for the sake of truth. He does something finer: He tells us to sacrifice any love we have, even the greatest, for His personal sake. Or rather, we should regard it as of much less consequence than our relationship with Him, given that He’s not only Truth, but also Life and the Way.

Today, the Sunday of All Saints, the Church doesn’t give pride of place only to those who were instruments of grace and citizens of heaven, but also sets out, in its own unique instructional way, the truth which all the saints took to heart from experience and which made them what they were: their fundamental and unwavering concentration on Christ’s Gospel, as the blueprint for their unimpeded relationship with the God the Father.