‘Elder, when a proud thought comes, I suffer’.

Do you hold it inside yourself?

Why do you keep it? Shut the door on it. If you hold on to it, you’ll do yourself harm. The thought comes like a thief. You open the door, let him in, start a conversation with him and then he robs you. Who talks to a thief? You don’t just not talk to them, you keep the door shut so they can’t get in.

You might not talk to him, but why should you let him in? Let me give you an example. I’m not saying that you do have such thoughts, but say that you imagine you might become Abbess. All right, the thought’s come. 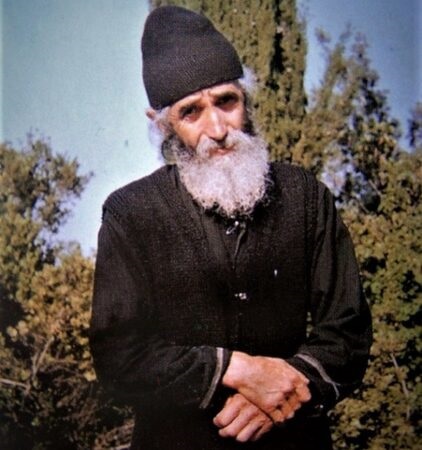 As soon as it comes, say to yourself: ‘Fine, you want to become Abbess. Well, first of all become Abbess of yourself’ in which case you cut the conversation off straight away. What, we’re going to have a discussion with the devil now? You see, when the devil went to tempt Christ, He said to him: ‘Get behind me, Satan’ [Luke 4, 8]. If Christ tells him to go away, why should we talk to him.

‘Elder, is it wrong to entertain a thought ‘from the left’ to see where’s it’s coming from?’

The bad thing is that you’re not entertaining the thought, as you think, but the fiend. It’s fine at the time, but afterwards you’re in trouble Don’t entertain such thoughts at all. Take the hand-grenade and toss it back at the enemy to kill him. The thing about a hand-grenade is that it doesn’t go off straight away but after two or three minutes. So if a bad thought comes pick it up and get rid of it immediately and it can’t harm you.

But sometimes you’re not keeping proper watch, you’re not saying the prayer and you can’t defend yourself. A telegram comes from the devil you take it, you read it, you read it again, you believe it and you put it into the archive. The fiend will present you with those envelopes on the Day of Judgement in order to bring charges against you.

Elder, when is an attack from a thought from the left a fall?’

The thought comes and you get rid of it straight away. That’s not a fall. It comes and you entertain it. That’s a fall. It comes, you entertain it for a little bit then send it away. That’s half a fall, because you’ve suffered harm, since the devil’s polluted your mind. It’s as if the devil came and you said to him: “Good morning, how are you. Have a seat while I get some refreshments. Ah, you’re the devil, are you? Leave now’. Since you saw he was the devil, why did you bring him in? You offered him refreshments and he’ll be back.

‘Why is it, Elder, that here in the monastery I have various bad thoughts, but I didn’t when I was in the world outside? Am I allowing them?’

No, you blessed woman. Let them come and go. When airplanes fly over the monastery and spoil your peace, do they ask you first? It’s the same with these thoughts. Don’t be down-heartened. These thoughts are directives from the devil. It’s like those migratory birds. When they’re flying up in the sky, it’s great to watch them. But if they land and build nests at your house, they then have chicks and these make a mess.

‘But why do I have such thoughts, Elder’.

This is the work of temptation. But there’s something left over inside you. The cleansing hasn’t taken place yet. As long as you don’t welcome them, you’re not responsible. Let the dogs bark. Don’t throw too many stones at them. Because the more you throw stones, the more they’ll bark and from all the stones they’ll build a monastery or house, depending. Then it’s harder for you to demolish.

‘So when is there acquiescence to bad thoughts, Elder’.

When you suck on them like candy. Try not to suck on these thoughts, that are sugar-coated but contain poison, because then you’ll despair. If people have bad thoughts, that’s not serious in itself, because only the angels and the perfect don’t have bad thoughts. What’s worrying is when people demolish part of their heart and welcome the wolf-winged* fiends. If this ever happens, immediate confession, clean up of the airport and cultivation of fruit-bearing trees, so that the heart becomes paradise again.

*In his inimitable fashion, Saint Païsios has changed the word for ‘helicopter’ [literally ‘spiral-winged’] to ‘wolf-winged’, which sounds rather similar in Greek.