The highest peak on the Holy Mountain is that of Athos, which is why the whole of the peninsula is named after it. The whole peninsula is full of monasteries and sketes. It’s dedicated to God and, in particular, to His Most Holy Birth-Giver, which is why it is also known as the Bower of Our Most Holy Lady. According to one tradition, the Mother of God herself picked out this location. Monasticism on the Holy Mountain goes back very many years and is the offshoot of the ancient monastic centers of Egypt and Palestine. Many great monks have lived the ascetic life on the Holy Mountain, among them Saint Petros the Athonite and others.

Outstanding among the great Athonite fathers is Saint Athanasios the Athonite, whose holy memory we keep on 5 July. He originally came from Trebizond and was born to devout and believing parents. Both his parents died when he was still young and he was left an orphan. He was taken in by a friend of his mother’s who brought him up in a very God-fearing manner. Even as a young boy, he stood out for his love of monasticism and letters, so everything pointed to the fact that God destined him for greatness. 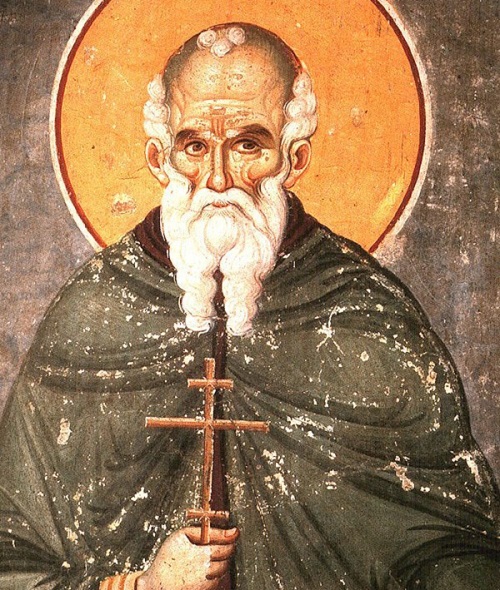 When he was older, he went to Constantinople to study. While there, he was so distinguished for his Christian behavior and love of learning that he was recommended to be the Principal of the School.

While he was studying in Constantinople, Saint Athanasios became acquainted with Abbot Mikhaïl (Maleïnos) from Mount Kyminas in Bithynia. Abbot Mikhaïl was the uncle of the future emperor, Nikiforos Fokas. At that time, the saint went by his baptismal name, Avraamios. He went to see the holy abbot and confessed that he wanted to become a monk. Abbot Mikhaïl gave him some advice and left him alone, to decide by himself. But it was not long before young, highly-talented Avraamios left the capital and the whole of his secular future and went to Mount Kyminas, where he was tonsured by Abbot Mikhaïl and renamed Athanasios.

Before long, the young monk distinguished himself for his monastic virtues, to such an extent, in fact, that the Abbot would send him people who were having troubling thoughts, in order to seek his advice. At one time the Abbot’s nephew, Nikiforos, who was a general at the time, arrived to ask his advice on spiritual matters, and the Abbot directed him to Athanasios. From then on, Athanasios and Nikiforos were linked with the bonds of friendship and Christian love. Indeed, General Nikiforos confessed that he wished to become a monk and live as such with Athanasios, but the latter replied: ‘Leave that to God’.

God destined Athanasios for a different location. One day he saw Athos from Limnos and he liked the look of it so much that from that moment he began to think about moving there as an ascetic. Soon afterwards, Athanasios left Mount Kyminas and went to Athos, for the sake of greater solitude. When he went, he made his obedience to an illiterate elder. At first, no-one knew anything about him. After he’d been sought out by Nikiforos Fokas, however, he became well known to everyone. Once they’d met up again and Nikiforos, who was now emperor, had repeated his desire to become a monk, in the year 983 Athanasios began to build the Monastery of the Great Lavra, with funds provided by Nikiforos.

Nikiforos Fokas was unable to fulfill his promise, however, because he was assassinated and Ioannis Tsimiskis ascended the throne of Constantinople. Athanasios managed to obtain funds from the new emperor, also, to continue the construction work on the Great Lavra. But the greatest assistance which Saint Athanasios had in completing the first monastery on the Holy Mountain came from the Most Holy Mother of God, who often appeared to him and ensured the provision of funds. And he himself undertook a lot of the work personally. He was a sturdy man and helped with moving the building material. He literally gave his life for the Great Lavra. He died when he fell from the scaffolding while he was assisting the masons in the dome. His last words were: ‘Glory to you, God’. Amen.