The Church and Churches

In his second discourse ‘On the Procession of the Holy Sprit’, Saint Gregory Palamas writes: ‘It was the common fate of all the Churches to fall away from the correct way of thinking, since over the centuries, wickedness polluted one or other of them. Not recovering after this fall, however, is true only in the case of the Church of the Latins, even though it is the greatest and chief and enjoys the most illustrious eminence among the patriarchal thrones.

What happened to it, the greatest of the Churches, is similar to what happened to the elephant, the greatest of the animals. They say that it does not lie down on the ground at the hour of sleep, but relaxes by bending two extremities. If it should happen that it fall, it cannot then raise itself up’. He goes on to say that the cause of its inability to rise is ‘the weight of its body and its obesity’, whereas, in the case of the Latins, it is ‘confusion of the mind [or ‘conceit’]*, which is an ‘incurable passion’. 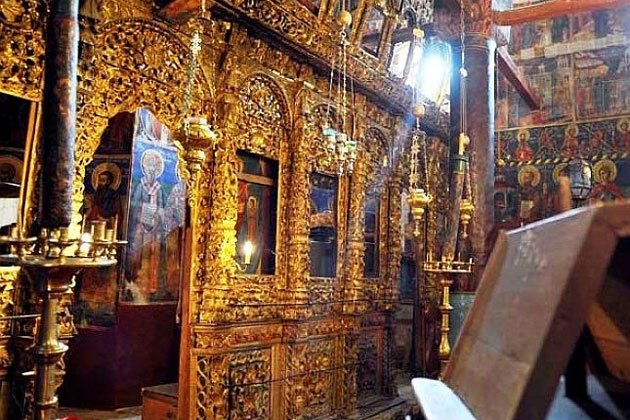 There are many local churches which succumb to lapses and recovery. But the Church of Christ, as the manifestation of the Kingdom of God on earth is one and undivided. In any case, the nature and purpose of the Church is the unity of all. We Christians all confess faith in ‘one holy, catholic and apostolic church’. Given this, denoting certain Christian confessions which have separated from it as ‘sister churches’ is theologically erroneous. Indeed, when it is used in inter-Christian dialogues, it becomes misleading.

According to unrevised Christian ecclesiology, the ‘sister churches’ were the churches in the East and West before the schism. After the schism, this family relationship was fractured on the earthly level. Of course, all Christians and, indeed, all people are kin on all levels, as descendants of Adam and so on [1]. In ecclesiological terms, however, the only sister churches are the local Orthodox Churches which retain the unity of the faith, communion in the same sacraments and their universal character.

Besides, after the schism, Rome itself, which claimed to be the continuation of the one Church of Christ did not consider the Orthodox Churches as sister Churches. Indeed, it avoided using the term ‘Churches’, in the plural, preferring the singular and, naturally, meaning itself by so doing. In its decree on ecumenism [Unitatis Redintergratio] the Second Vatican Council states that fraternal communion of faith and the sacramental life is always to be thought of as being under the guidance of the Roman See. It does, indeed, use the term sister churches, but in order to denote the relationship between the local Churches of the East among themselves, not with Rome itself.

It may be that the use of the term ‘sister churches’ to characterize the relationship between the Orthodox Churches and Rome, as was the case later with Pope Paul VI, was a gesture of goodwill, but this was not accompanied by any dogmatic amendment. In fact, through the text by the Congregation of the Doctrine of the Faith, Rome reverted to its former position. Here it is claimed quite clearly, though the claim is couched in diplomatic language, that ‘the one holy, catholic and apostolic universal Church is not the sister but the mother of all individual churches’.

Every local Orthodox church prays ‘for the holy churches of God’, which are the other local Orthodox churches, and ‘for the union of all’, who are the separated Christians and the whole of the rest of the world. The separation on the part of the Western Christian world is a tragic phenomenon in the history of Christianity. The Orthodox Church, which is aware of being the universal Church, cannot but pray for and work towards the unity of all Christians. This does not mean, however, that it views the Christian confessions which have broken away as ‘sister churches’.

The claim that the champion of Orthodoxy, Saint Mark of Ephesus, indiscriminately called the Churches of East and West ‘sister churches’, seems not to bear scrutiny. As the Proceedings of the Council of Ferrara-Florence (in the version published by Mansi) record [2], Saint Mark calls the Church of the East the ‘sister’ of the Latin Church only when he is referring to the period before the innovation regarding the ‘filioque’. Thereafter, however, when discussing the Council, he does not use that term. The phrase, ‘to her sister, or rather sisters’, which is attributed to him and occurs in the edition of the Proceedings by Gill [3], based on a manuscript transmission, appears to be a later addition which, in fact, interrupts the smooth flow of the text.

Of course, in everyday language, the term ‘church’ is also used for various Christian confessions. This is also recorded in sociological terminology. It is common knowledge that sociology is not and should not be an evaluative science, but rather a kind of ‘geometry’ of social reality, which categorizes various social patterns. So, in sociological terminology, ‘church’ and ‘heresy’ are used to denote two basic types of religious congregations, without any evaluative or theological gradation. ‘Heresy’ denotes a religious congregation of people who enter it of their own free will, whereas ‘church’ means an established religious institution with members who are incorporated at birth [4].
So for these reasons, the use of the term ‘churches’ in a theological sense is misguided and erroneous. Christ is one and His Church is one. Any Christian church which recognizes its existence and that of another or any other Christian churches in theological terms, necessarily admits that it cannot be the Church of Christ. The use of the term on a theological level with a sociological meaning is misleading and undermines all meaningful theological dialogue. According to Orthodox ecclesiology, the term ‘Church’ cannot be used to refer to non-Orthodox religious institutions.

* The Greek word τύφος which Saint Gregory uses here, originally meant ‘a smoky atmosphere’. For there it went on to mean ‘a clouded mind’ and then ‘conceit’ or ‘vanity’. One of the symptoms of a certain disease was that it produced confusion, hence ‘typhus’ [WJL].