‘Have mercy upon us, Son of David’.

Many miracles have occurred through the invocation of the name of Christ. As He went towards His passion, He said: ‘Whatever you ask in my name, I will do’ (Jn. 14, 13). Equally, when He ascended into the heavens and gave His final admonitions to His disciples, He again stressed: ‘In my name they will cast out demons, they will speak new tongues…’ (Mark 16, 17). The Apostles performed miracles in the name of Christ. This really did happen. The Apostles Peter and John cured a lame man who was sitting outside the temple by calling upon the name of Jesus Christ (Acts 3, 6). Let’s examine in simple terms the name of our Lord.

The name of the Lord Jesus

In today’s Gospel (Matth. 9, 27-35), we heard about the two blind men who called upon the name of the Lord and asked Him to have mercy on them. Saint John Chrysostom says that they didn’t simply go to meet him but ‘shouted loudly and required nothing else of Him but that He show mercy’. The sweet name of Christ isn’t human, but divine and celestial. It wasn’t given to Him by human beings, but by His heavenly Father (Matth. 1, 21). It’s the delightful object of study of our mind, tongue and heart. Saint Nikodimos the Athonite refers to a Christian who died on Christ’s tomb, calling out ‘Jesus Christ, sweet  love’. 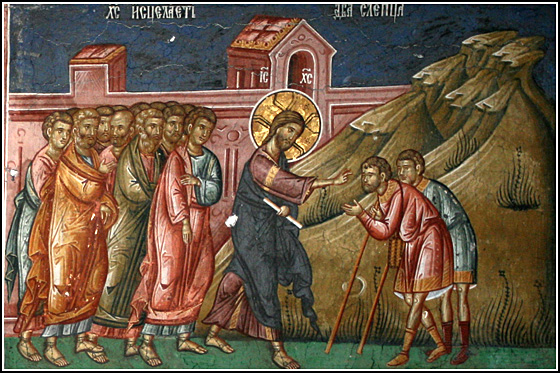 It’s true that Christ’s energies are manifested through nouns: ‘Sophia’ (Wisdom), ‘Irene’ (Peace), ‘Hara’ (Joy), ‘Kyrios’ (Lord), ‘Vasilevs’ (Basileus, King), ‘Theos’ (God) and so on. Our faith isn’t abstract but is directed towards a particular person, Who has a name and is alive, Who can love and enter into communication with other people. This person is Jesus Christ. He entered into communication with us, loved us, became a human being similar in person to us.

His name is linked to our salvation. The Apostles told the leaders of Israel that we will find our salvation beneath this name. The name Jesus is inexhaustible riches. It’s ontologically associated with Him. It’s a conduit through which grace flows to us  and fills our whole being with the presence of God. It gives us life and strength.

The invocation of the two blind men, that is ‘Have mercy on us, Son of David’ is a variation of the well-known prayer ‘Lord Jesus Christ, Son of God, have mercy upon us’*, which we usually call ‘the Jesus Prayer’. This prayer wasn’t discovered by monks, , but, as we saw above, it was a prayer recommended by Jesus and was used by the Apostles. It’s a scourge against the demons. Saint John of the Ladder writes: ‘Flay the enemy in the name of Jesus’. The prayer conceals within it the mystery of the Holy Trinity. Jesus is the Son of the Father, and mercy and grace come to us through the Holy Spirit. To those who say it continually, the prayer of Jesus’ name gives strength, vigilance, clarity of mind, the grace of life-giving tears, love for our brothers and sisters, desire for our salvation and, in general, a connection between us and God.

The use of the prayer

If the Jesus prayer is to bear fruit, we must humble ourselves and love Christ. An Athonite monk used to say that, when we say ‘Lord Jesus Christ, have mercy upon us’, we should emphasize the verb phrase, i.e. ‘have mercy upon us’, as was the case in today’s instance of the blind men in the Gospel. We must humble ourselves, weep over our sins, acknowledge God’s priority in our life and then we’ll bear an abundant harvest within us. When we say the words with a lack of spiritual warmth and no love for Him Whom we’re addressing, then we can’t bear fruit spiritually. Prayer without attention leaves a void within us.

We might consider the words spoken by the blind men to be a fervent prayer. They said ‘Lord Jesus Christ have mercy upon us’, and they found a boundless ocean of salvation. Let us also pray thus, intensely, so that God may have mercy upon us.

* The connection with David is important here. Psalm 50 is one of the psalms which can confidently be ascribed, for a number of cogent reasons, to David himself. It begins: ‘Have mercy upon me, God’. The two men called upon ‘the Son of David’, who was identified with the Messiah. ‘Messiah’ was translated into Greek as ‘Christ’, the anointed one. In Judaism, the Messiah is seen as a liberator, but in Christianity, He is the Son of God. So David was asking God to have mercy upon him and the two blind men were asking the same of the Son of David, the Messiah, Christ, a hypostasis of God in the Holy Trinity [WJL].